The swirling rumors about Logan Paul and Corinna Kopf officially dating hit an unexpected turn during episode 32 of his ‘imPaulsive’ Podcast when the Instagram model came up in conversation.

The imPaulsive Podcast is known for exploring various topics of discussion including alcohol, raging parties, stories behind content creators and more, but their latest guest had a very personal interaction with Paul’s rumored girlfriend.

The show guest starred Elle Mills who’s had a meteoric rise in popularity and the podcast discussed one of her latest videos where she shared her first kiss with none of other than Kopf. 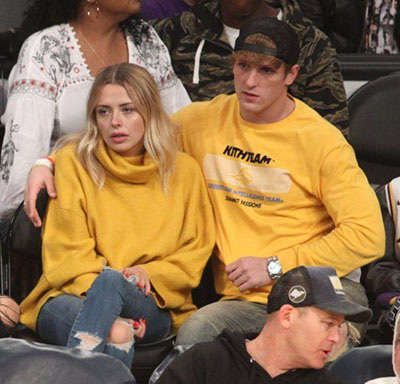 The have been spotted at public events, but have yet to announce anything official.

The conversation had many hilarious talking points, but while co-hosts Spencer Taylor and Mike Majlak were actively engaged with their guest, Paul had his eye elsewhere.

Majlak even poked some fun at Paul by saying “we’ve been waiting to have someone on the podcast who knows what it’s like to kiss her.”

At this point, Paul seemingly couldn’t look at the camera and simply continued staring at the projector screen behind them with a smirk on his face.

However, Paul’s attention was immediately turned back to the conversation when Mills revealed that her kiss with Kopf was actually her first kiss.

Paul stumbled to get clarification from Mills just before the group had gone back to talk about Mills’ story. As soon as the conversation had moved on, Paul’s attention too moved on right back to the screen with the image of Kopf.

The speculations weren’t helped when Kopf was briefly spotted inside of the Maverick Mansion in a February 4 video with Paul and many online influencers sharing a ridiculously huge burger.

(timestamp at 2:18 for mobile viewers)

The scene comes just weeks after the two were spotted at a Laker game together and tweets from the model that spurred further speculation that the two have been more than just friends.