Fresh off the back of his win in the rematch versus Logan Paul, Olajide ‘KSI’ Olatunji has slammed a “stupid” Justin Bieber, who taunted the victor before the fight.

The KSI vs. Logan Paul rematch was the biggest pay-per-view internet event in history — reportedly shattering the previous record of 1.2 million buys.

Although official figures are yet to be released, both fighters are expected to pocket over $1 million from the fight alone.

Of course, pay-per-view numbers were expected to soar, given the hype and slander that was thrown from both camps before the fight. One guilty party of weighing-in, was none other than global superstar, Justin Bieber. 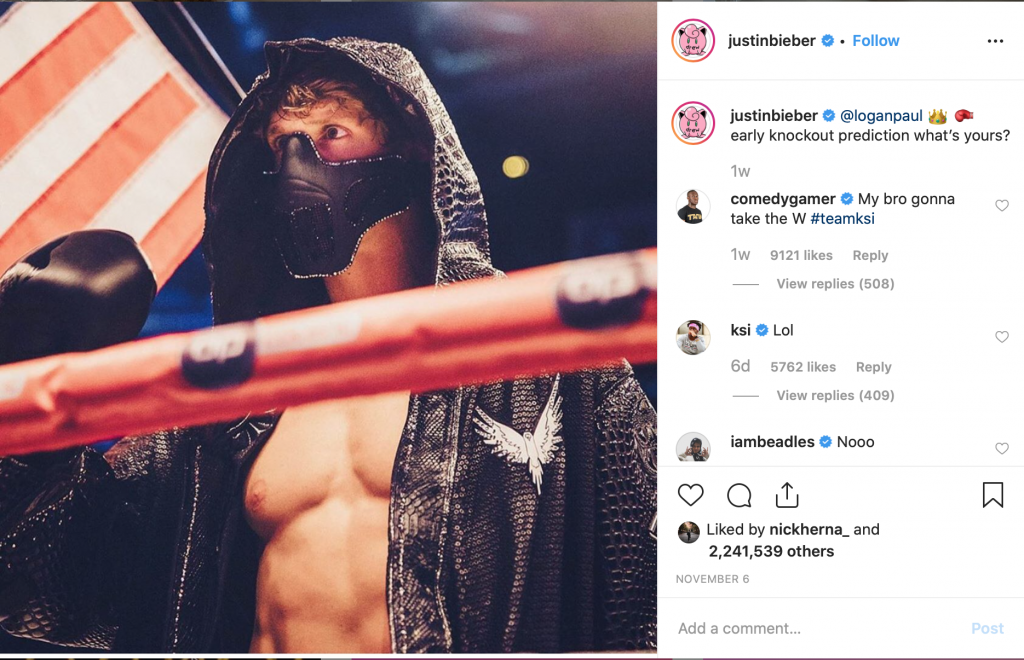 Bieber pledged his allegiance to his 121 million followers on Instagram.

Bieber predicted that Logan would “Rip his head off” in the days leading up to the fight. Of course, this prevailed not to be the case.

After edging out the bout by a split decision, KSI returned to YouTube to provide a summary of the contest.

Having previously claimed that he would “destroy” the Canadian pop sensation in a boxing match, KSI responded to Bieber’s verbal slews with some jabs of his own.

Talking about the build-up the contest, KSI said: “A lot of influential people were hoping for my downfall, including Justin Bieber and, well, it sucks to be him right now…”

Explaining the post-fight situation further, KSI said: “Literally I was mouthing to him: ‘Logan didn’t win. Logan didn’t win… He didn’t rip my head off, did he?’ Justin Bieber was just sarcastically smiling. My man was so triggered, I could just see it in his face.”

The British YouTuber then pulled up a screenshot of Justin Bieber’s post. The post highlights Paul’s knockdown of KSI and is captioned: “REALITY .. LOGAN PAUL CHAMPION.”

Staring at the camera, JJ added: “Clearly he’s not living in reality and is delusional as f***! So Justin Bieber, let me confirm this reality for you… Here is my boxing record and here is Logan’s. Hopefully now you can see how stupid you look.”

Although the YouTuber might be on cloud nine after his triumph, a flurry of verbal exchanges could soon lead to the pair locking horns inside the boxing ring in the near future.