Fouseytube explains why he has “no purpose” after boxing loss

YouTube star Yousef “Fouseytube” Arakat ended his social media hiatus with a debut in the boxing ring, facing off against fellow YouTuber “Slim” on September 29. His subsequent loss is apparently affecting more than his fight record.

Fouseytube suffered a debilitating defeat in the boxing ring against Slim, walking away with a broken nose that ultimately required surgery.

Although their fight purse went to charity, Fouseytube is taking his loss hard, as evidenced by his social media posts after the bout.

However, a now-deleted Instagram story from the YouTube star is sparking concern across the net, with Fousey admitting that he is suffering from depression in wake of the fight and feeling like he has “no purpose.”

“With the boxing event, I had purpose,” Fousey explained. “Something to work towards every day. Something to look forward to. Something to live for. Now that it’s over, depression hit HARD.” 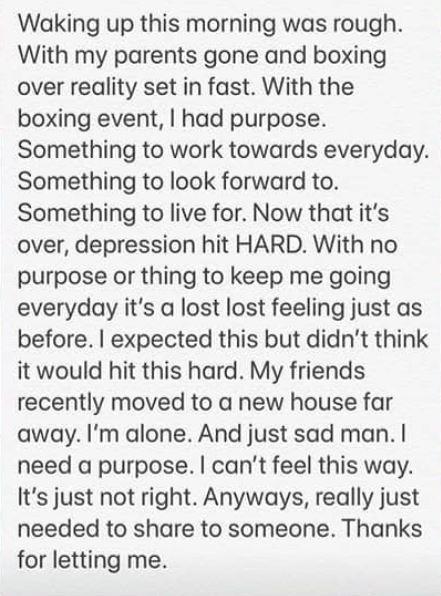 Arakat went on to explain that, with his friends moving away and his family leaving, he feels “alone” and “sad,” claiming that he needed to openly express his current feelings to his audience.

This wouldn’t be the first time Fousey’s mental health has been center stage, though: the star infamously sparked concern in summer 2018, after his “July 15” event was canceled in wake of a supposed bomb threat, with the YouTuber hopping on top of the roof of a car to make an impassioned speech to his fans.

Arakat opened up about the debacle on an episode of Logan Paul’s “imPaulsive” podcast in February 2019, where he explained that he’d stopped taking mood stabilizers before the event and had instead opted for Adderall.

Calling the incident a “trainwreck” and an “explosion,” Fousey claimed that he hadn’t been able to move past the “July 15” failure – nor the backlash surrounding the incident.

Arakat took a hiatus from social media in wake of the debacle, returning in 2019 with a new purpose in boxing.

Although his first bout didn’t end in his favor, it doesn’t look like the star is slowing down anytime soon – and is even embracing his defeat with a full-length documentary.