Controversial YouTuber Jake Paul threw some shade at ex-girlfriend and model Erika Costell on his Instagram story, and Erika shot back in kind – just ahead of his birthday on January 17.

Paul posted a picture to his Instagram story with a speech bubble above his head, which read, “I mean, yeah, she was hot, but like, idk if I needed her as much as I thought I did.”

Costell appeared to hit back at the picture with a cryptic Tweet on January 16, where she posted a picture of the definition of the word ‘insanity.’

“Insanity: Doing the same thing over and over again and expecting different results,” the picture read. 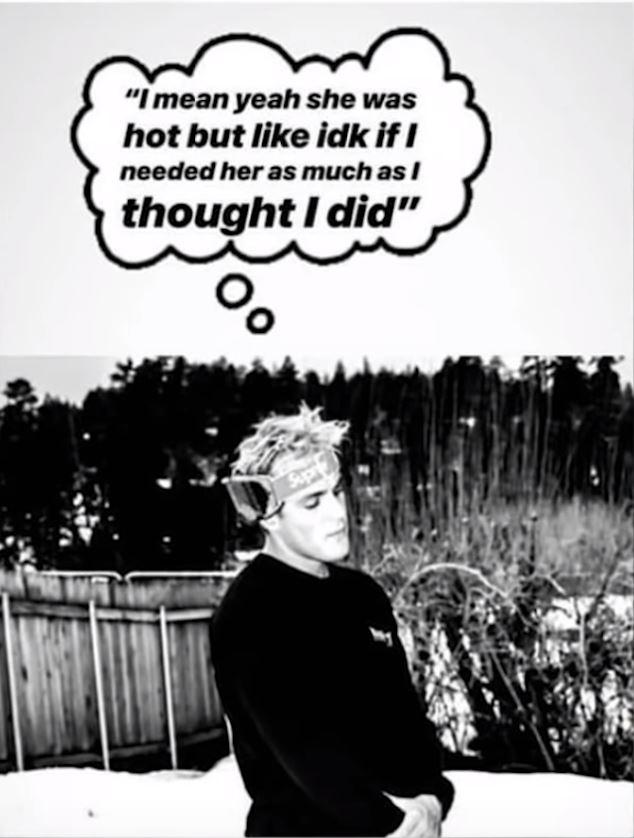 Jake Paul threw some not-so-subtle shade toward his ex-girlfriend, Erika Costell, in an Instagram story just ahead of his birthday on January 17.
https://www.youtube.com/watch?v=2hpz16PGhbE

This latest exchange follows a series of subtweets between the ex-couple earlier in January, after Erika Costell unfollowed the “mini Erika” and “mini Jake Paul” (otherwise known as Tydus Talbott) on Twitter upon watching Jake Paul’s “breakup” video featuring the two tots.

Paul hit back at Costell’s social media moves with a scathing Tweet, saying, “It’s sad that unfollowing someone is actually a meaningful currency for you… check yourself.”

Paul appeared to follow up this statement with another Tweet, which read, “100% confirmed to be the person who I so hoped & prayed you wouldn’t be.”

While Erika has been decidedly silent on their breakup (answering with a simple “Oh, hell no” when asked if she was currently seeing anyone), Paul has spoken out on the issue in his ‘Jake Paul Uncut’ documentary series – as well as calling Erika up for a failed New Year’s Eve kiss.

It’s sad that unfollowing someone is actually a meaningful currency for you..

100% confirmed to be the person who I so hoped & prayed you wouldn’t be:gasp: