Deji's feud with KSI could be finally over, according to reports - Dexerto
Entertainment

Deji’s feud with KSI could be finally over, according to reports

Popular YouTubers Deji and KSI have been locked in a bitter feud, after Deji leaked KSI’s bank records for a diss track in late November 2018. However, their month-long spat may be at an end, according to a Tweet created by Drama Alert’s KEEMSTAR.

Daniel ‘KEEMSTAR’ Keem posted a Tweet on January 5, which claimed that he had spoken to Deji about the feud over the phone. His post alleged that their call came to a finite conclusion, with Deji reportedly deciding to “move on” from the spat with his older brother.

“Just got off the phone with Deji,” KEESTAR wrote. “He’s going to take a break and drop everything and move on.”

This statement lines up with Deji’s previous declaration in a video posted on the same day, where he claimed that he had “moved on” from their beef – despite going on to take shots at KSI for his reaction to his own videos explaining the debacle.

“I’ve honestly moved on from that whole beef, yet he’s still reacting to it,” Deji stated.”…I’m disgusted. I don’t even want to watch this.”

Deji has since deleted his diss track against KSI, as well, marking yet another show of good faith towards his brother.

So @Deji told me he would delete the @KSIOlajidebt disstrack.

& i just checked his channel. He did it!

While KSI has yet to react to Deji’s latest demonstration of solidarity, the YouTuber did express some tough love toward his younger brother in a reaction video on January 4 in regards to his single, ‘No L’s.’

Deji has likewise seen a massive decrease in subscribers following their fight, losing a total of 48,902 subs in the past 30 days. 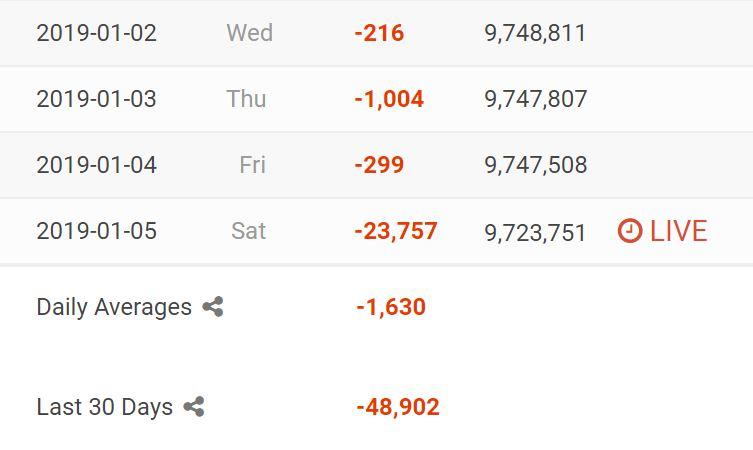