YouTube star David Dobrik has partnered with Nick Uhas to break the world record for the biggest Elephant’s Toothpaste science experiment, foaming up his entire backyard.

David Dobrik doesn’t do things by halves. The vlogging superstar has broken out over the last couple of years to become one of YouTube’s biggest content creators, showing off his extravagant lifestyle to 15 million subscribers.

He’s also got a bit of competitive fight in him. So when other YouTubers came along to try and snatch his title of the biggest Elephant Toothpaste experiment in the world, Dobrik put all the doubters to rest. 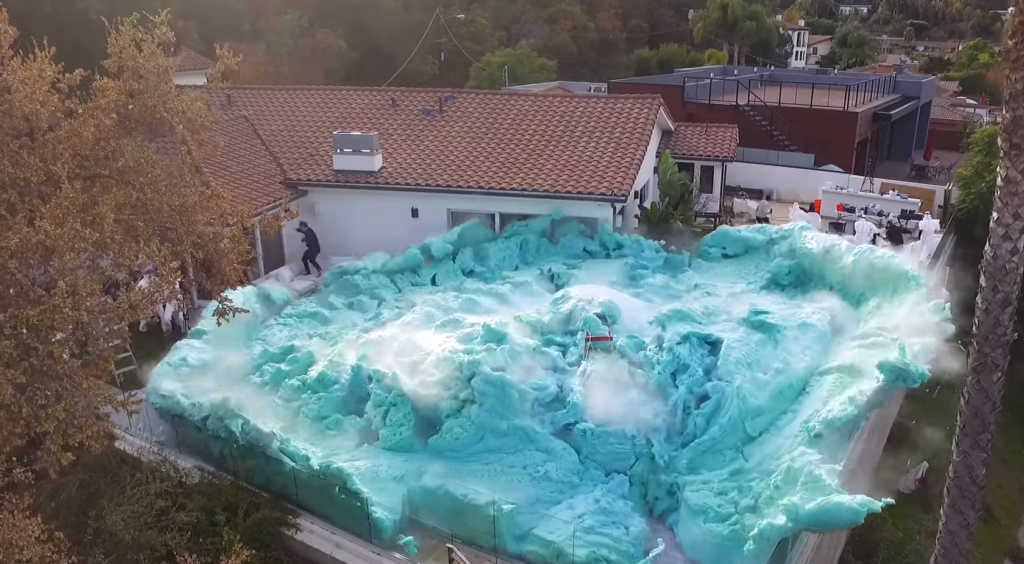 David Dobrik turned his backyard into a sea of blue with the world’s biggest Elephant Toothpaste experiment.

With the help of scientist Nick Uhas, David Dobrik managed to pull off the world’s biggest Elephant Toothpaste experiement with almost 200 cubic meters of foam spilling over his backyard.

625 litres of Hydrogen Peroxide, 29 bottles of soap, dozens of blue food coloring bottles, and kilograms of Potassium Iodide was all it took for the back streets of LA to turn into a tide of blue.

As the experiment all came together, with everyone kitted up, Uhas and Dobrik tipped the catalyst into the reactant, and chaos ensued.

“Oh my god, oh my god, holy sh*t,” Dobrik yelled, running away from the blue wave taking over his yard. The foam spilled well out of the yard, catapulting down the hillside, and even flying away into the distance.

For mobile readers, the related segment starts at 3:01.

The 625 litres of 35% Hydrogen Peroxide they used was almost double Mark Rober’s attempt in August which generated 54 cubic meters of foam, with a stronger catalyst in Potassium Iodide.

This attempt was also three times as large as their experiment in September, which made around 67 cubic meters. They weren’t looking to just break the world record, but absolutely smash it.

The science behind the experiment is pretty simple. The catalyst strips an oxygen atom off the Hydrogen Peroxide, leading to gas being formed and getting caught in the soap. The gas looks to rise, and with the chemical reaction taking place so fast, it expands everywhere.

There was a downside though. The walls of Dobrik’s house were stained blue thanks to the catalyst, and it’ll take months of cleaning to get it back to normal.

However, there’s no doubt what Dobrik and Uhas has created is now by far the biggest Elephant Toothpaste experiment on YouTube, taking home the world record at the same time.