Counter-Strike: Global Offensive caster and former pro Henry ‘HenryG’ Greer responded to the allegations by ex-girlfriend Kelly Jean of abuse during their relationship.

Her account detailed a series of instances described as emotional abuse and sexual misconduct throughout, and briefly after, their time together. Jean, a cosplayer and Twitch partner, described an encounter during New Years’ Eve 2019, which she says was not consensual.

It wasn’t until she sought out help between March and April of 2020 that she felt better equipped to sort and deal with emotions in relation to HenryG, leading to her TwitLonger outlining the series of events.

“I didn’t process any of this properly until March-April,” Jean explained. She has been working with a therapist who urged her to report what happened. “It was nice to be taken seriously and it helped me deal with a lot of these emotions.”

Two days later, on June 23, HenryG published his response to the allegations expressing regret for things that were said between the two of them, but denied any sexual or physical abuse that his ex-girlfriend claims.

This is absolutely terrifying for me to write and I am sorry to mutual friends I did not warn. It has been mentally taxing. To those that knew, thank you for your support.

His description of that New Years’ Eve encounter indicates that it was Jean who initiated acts that night, however, shortly after, nothing had transpired after she felt unwell and indicated as much.

“As we started to separate, New Year’s Eve became a focal incident in her mind,” he explained in his reply. “Her complaints were that I didn’t take care of her, that I had been more interested in the prospect of s*x than taking care of her while she was intoxicated, and that I was being selfish.”

“I can understand why the situation may have scared her because she didn’t feel like she was in control or safe, even though I would never hurt her.”

Both parties used screenshots of private exchanges through WhatsApp, Discord, or other lines of communication detailing their accounts of the other’s behavior. Published messages show Jean had “acknowledged nothing untoward had taken place,” according to HenryG.

“All I wanted was some understanding of how I felt at NYE,” a message from Jean says. “That we both know it was not r*pe. I also don’t feel it was an assault either, personally, but that you were aware what you did was hurt me, by accident, because of selfish impulses.”

Henry also admitted that it was “absolutely understandable that she may have experienced trauma in connection with the events of New Year’s Eve,” given incidents from a previous relationship, but definitively stated “what happened between us was consensual, and ended when she decided she did not want to continue.”

He also produced screenshots of a conversation that took place after she’d apparently “turned up uninvited to [his] home in London and attempted to force herself into [his] property because she wanted to talk about [their] relationship” after it had ended.

Henry said that he and his current partner had a “difficult but necessary group conversation” at his home, in which “no allegations of assault were made,” after which they both felt they’d “resolved to move forward with separate lives.” 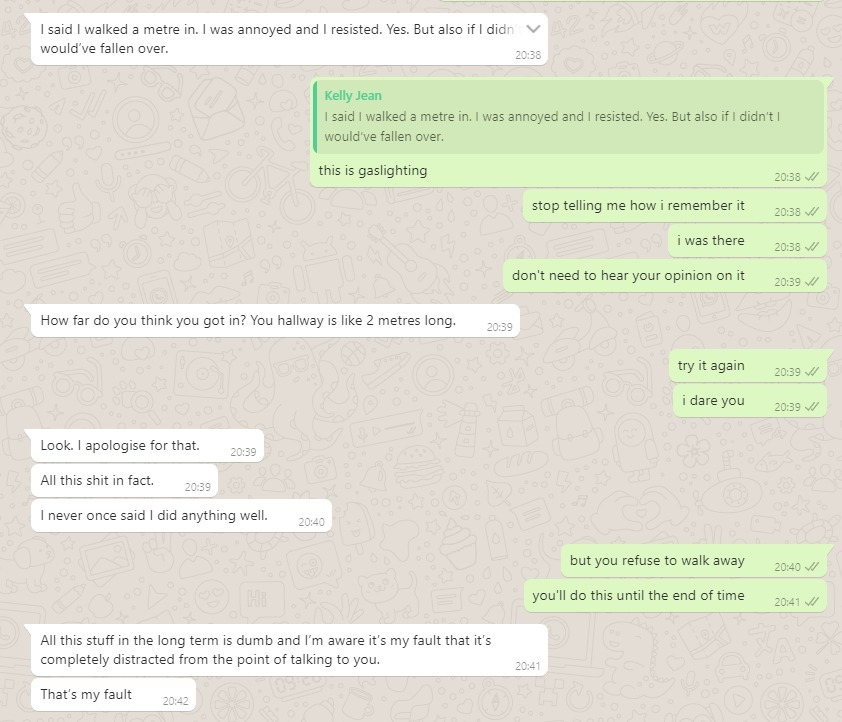 Shortly after Henry’s long post was published, Jean reviewed it and found many entries to be “ridiculous,” noting how she refused to call the incident anything but a non-consensual interaction.

“I’ve also never called once what happened r*pe for my own reasons,” Jean replied soon after HenryG’s response. “I have trouble accepting it as assault, which is why I wrote ‘had sex without my consent.’ He KNEW I was too high and he still had s*x with me anyway.” 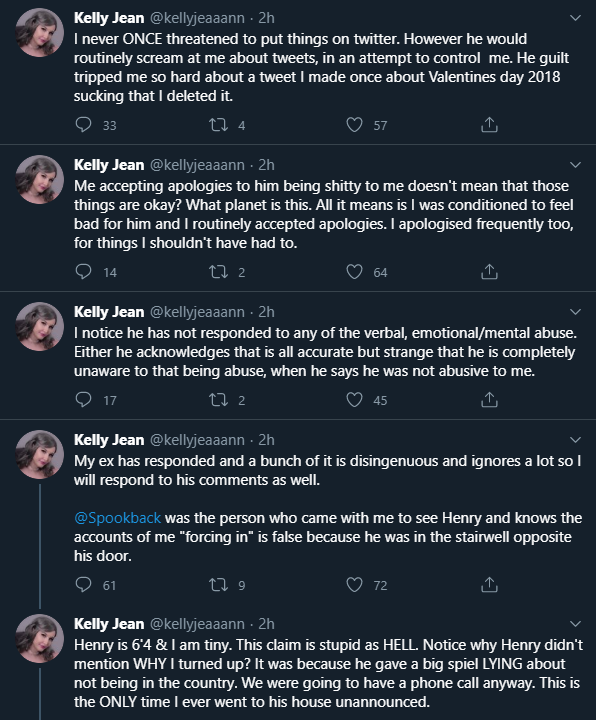 As far as public statements go, HenryG said that he’s confining himself to this single post on the matter, while Jean is expected to make another response, this time addressing what she says are inaccuracies in his side of the story.

These allegations come at the heels of women in the industry having the courage to report and make public instances of harassment against popular content creators such as SayNoToRage and Syndicate, among others.