CS:GO has been a staple in esports for the entirety of the decade and Cloud9’s Boston Major winning squad have dubbed Jake ‘Stewie2k’ Yip’s Inferno B hold to be the play of the decade.

Alongside the likes of Dota 2, League of Legends and Call of Duty, Counter-Strike has long been at the heart of mainstream esports. Having transitioned from Source in 2012, Global Offensive has played host to some incredible moments that will last many a lifetime.

From Vincent ‘Happy’ Schopenhauer’s Deagle ace on ‘old’ Inferno, to Olof ‘Olofmeister’ Gustafsson’s infamous Scout boost on Overpass, there is memory there that will resonate with many as we move into the new decade.

It is for this reason why the official CS:GO Twitter account have rounded up the eight best plays of the decade, which will be polled in the form of two brackets until a winner is eventually decided.

Based on your replies, we have 8 finalists for CS:GO's play of the decade. Vote on your favorite from each poll. The top 4 vote getters will be in a winner take all poll tomorrow to determine the winner. Each poll will take votes for 24 hours!

And the final four plays up for play of the decade:

Full to the brim of names synonymous with the very best that Counter-Strike has to offer, each play could quite easily hold its own. Eight will be whittled down to four in on December 31, where a winner-takes-all vote will decide the overall winner.

By this logic, Cloud9’s Major winning squad have got together for one last ride in a bid to propel Stewie2k’s renowned B-site hold on Inferno during the Grand Final of the Boston Major.

Triggered by Tarik ‘tarik’ Celik stating: “You gotta go with Stew at this point,” he was joined by his former teammates in Skadoodle, autimatic and Rush as they rallied together to back Stewie’s iconic play. Even former Cloud9 manager, Tres ‘Stunna’ Saranthus, chipped in. 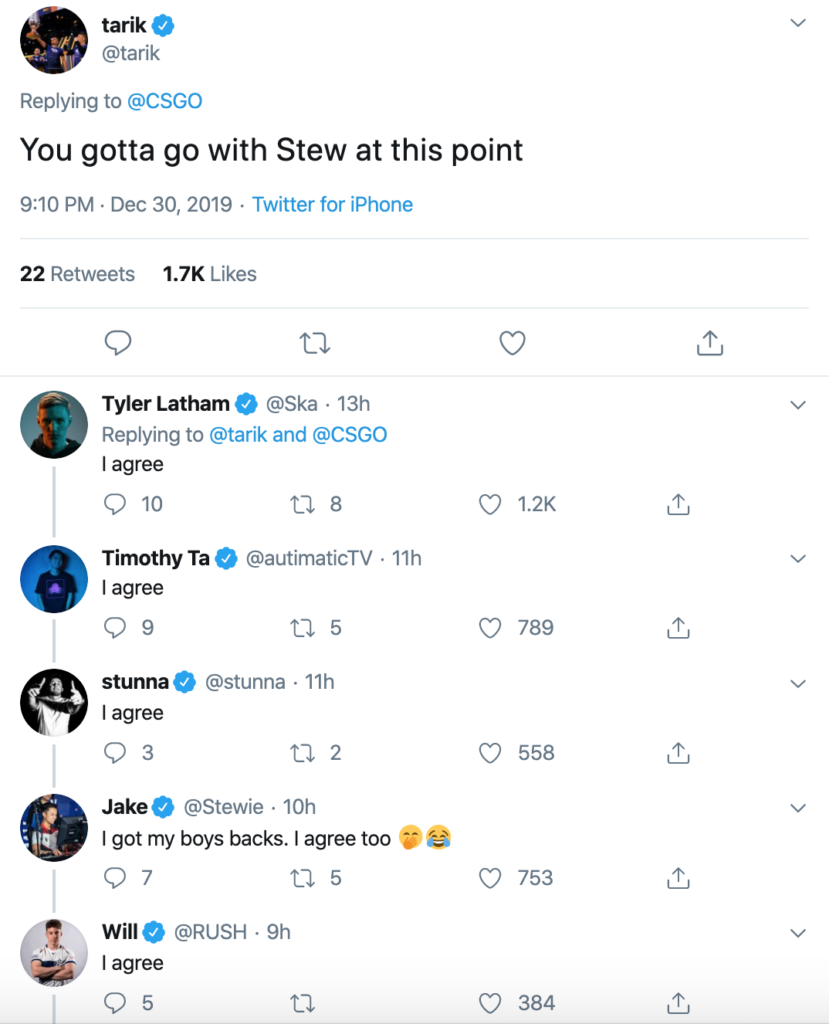 For those unfamiliar with the play, Cloud9 found themselves on the brink of loss. With the series tied at 1-1, the North American roster found themselves 15-14 down against the FaZe’s all-star lineup, led by Finn ‘Karrigan’ Andersen.

Karrigan and co. faked an A play and made their way over to the B bombsite with mere seconds on the clock. At this point, Stewie found himself isolated on the bombsite with three FaZe members inbound.

With less than 10 seconds and his back against the wall (quite literally), Yip single-handedly defended the bombsite with nothing but an AWP in-hand. This took the map to overtime and transpired to be the pivotal play that would win Cloud9 their first major.

Not only did the clutch call for pinpoint accuracy and in-game smarts, but it also required the composure to remain calm when he was up against the legendary trio of GuardiaN, NiKo and rain.

Almost two years on from their win, it’s no surprise that tarik is rallying the troops to vote for Stewie’s play — especially considering it bought them another life in the Boston Major.