One savvy Call of Duty: Warzone player has taken inspiration from Rainbow Six Siege and Apex Legends’ Pathfinder in devising a concept that would be perfect to tackle campers in Verdansk.

Warzone sports a number of metas which can vary from game to game. One match you find yourself dodging vehicles left, right and centre, the next you might find yourself inundated with snipers taking the high ground.

It is the latter which one shrewd Redditor has devised a solution for, by taking inspiration from Infinity Ward’s battle royale counterpart, Apex Legends.

Rooftop campers are usually armed with snipers, making it that much harder to take them down from their post.

Despite being set in the futuristic Titanfall universe, Apex Legends has a number of features which would work well in Verdansk — such as how teams drop into the map to avoid team splitting in the early stages.

And one Reddit user has taken inspiration from everyone’s favorite MRVN, Pathfinder, when constructing the perfect concept to take down those pesky rooftop campers.

Rayledare created the ‘Grappling Hook’ as a buyable item from Buy Stations for $2000, which would allow players to scale buildings within a few seconds, as opposed to having to climb the seemingly endless flights of stairs. 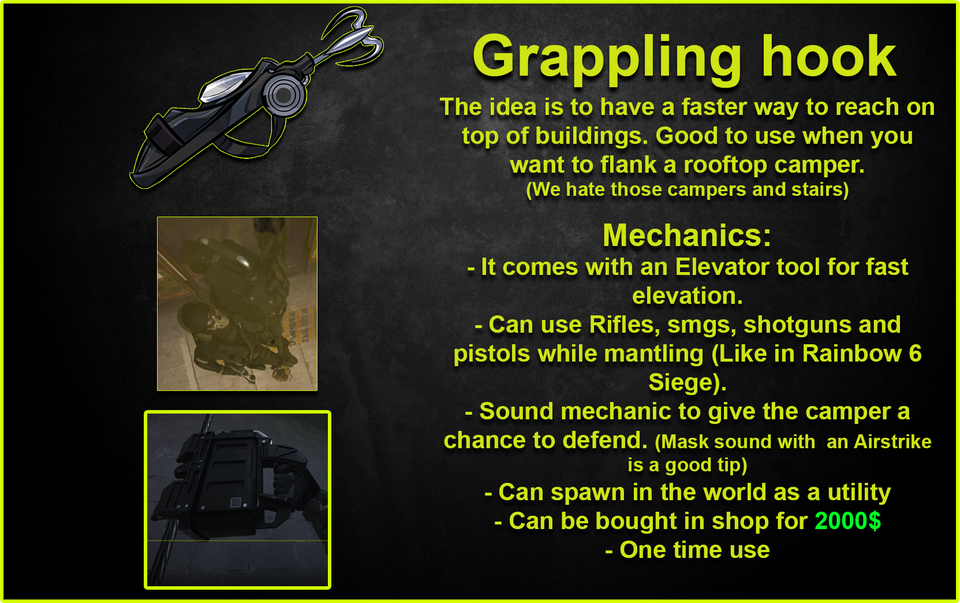 As per Rayledare’s post, the Grappling Hook would allow players to attack a building from all angles, as it would also come equipped with an ‘Elevator Tool’ for “fast elevation.”

Just like in Rainbow Six Siege, the player would be able to simultaneously use their primary weapon — meaning that if a player takes shots, you won’t be in a compromised position.

To balance the utility, they would be deployed as a one-time use item and would create specific sound cues to alert players of the oncoming threat.

One user vouched towards the notion of the grapple, as they commented: “As long as the grapple gives fair audio warning and time for the defenders to react, I don’t see how offering the option damages the game for anyone…”

In terms of what you can do right now, another player improvised and conjured the perfect solution for wiping out enemies that set up shop on rooftops, by utilizing a Precision Airstrike from beneath their feet.