OpTic’s Scump takes another shot at eUnited during scrim stream

Scump was in the midst of a livestreamed scrimmage on November 10 when he jokingly referenced eUnited’s request to replay a map in last week’s 2K, after eUnited player Arcitys was lagged out in the middle of a game against OpTic.

“Yeah, let’s do the eUnited,” Scump said. “Play until something goes wrong, and then win-win.”

This comment incited a wave of good-humored laughter from his team.

This isn’t the first time Scump has roasted eUnited, either; he and the org got into it on Halloween, after eUnited Tweeted a picture of their ‘costume’ (which was just their logo, painted in OpTic’s colors).

Scump responded to their ‘costume’ with a Tweet comparing their LAN wins to an invisible ghost, then followed up by calling the team’s post a ‘lame, cheap shot.’

“I’d be embarrassed to rep that child shit,” he said in response to eUnited’s Clayster, who had given his own, sarcastic take on the interaction. 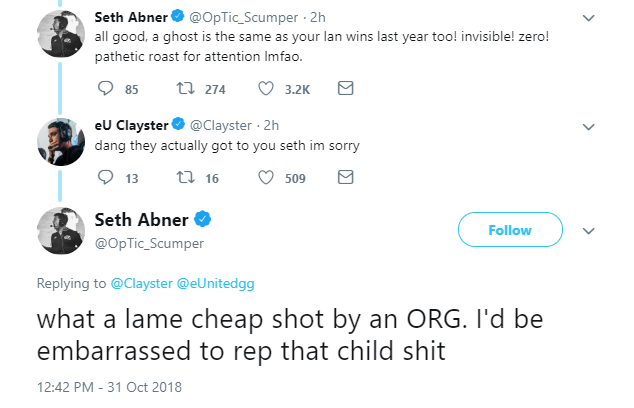 OpTic and eUnited were part of a more recent feud on November 9, where the vice-president of OpTic’s parent company, Jacob ‘Maelk’ Toft-Andersen, threw major shade at eUnited’s popularity.

“He’s so used to eUnited being just as popular in every other title as they are in CoD,” Maelk said of eUnited’s Clayster.

While Scump’s comment during his stream was likely a mere lighthearted jab, it looks like the rivalry between the two organizations is far from over.