MuTeX explodes at CoD “nerds” after being booted from Dallas Empire

Call of Duty professional Charlie ‘MuTeX’ Saouma has been formally dropped from the Dallas Empire roster, and proceeded to unload a heated tirade in his first Twitch stream following the news.

Following a controversial outburst on stream where MuTeX unleashed a flurry of offensive language towards a teammate, the pro was dropped from Dallas Empire’s franchise CDL roster on November 25.

Despite being immediately apologetic for his actions, stating that “it was a joke… a very, very bad joke,” he adopted a drastically different tone when settling into his first broadcast since his removal from the Call of Duty League.

Discussing his removal from the team, MuTeX attempted to persuade the Call of Duty community that the Dallas Empire lost an extremely valuable asset.

“Realistically speaking, it is a big f*cking L for you guys. I’m not gonna lie, you guys lost a huge f*cking asset. You’re never going to find anyone as valuable as me when it comes to f*cking Search and Destroy and the passion behind Call of Duty.”

Following up his Twitch ramblings, MuteX momentarily released a video on Twitter to clarify his arguments and double down on his extremely confident position in the competitive Call of Duty scene.

Amidst ample praise for the rest of the Dallas roster, he continued to underscore how the organization lost “an asset” in dropping him.

“I’m telling you I was gonna do a great job, anyone that’s gonna say I wasn’t is just delusional,” he said, before adding the team had lost a “top-tier” SnD analyst. “The reason I said what I said, is to clarify that the little trolls that prayed on my downfall, f*cked you guys over too.”

Despite appearing quite confident in his convictions on-stream, MuTeX soon deleted the follow-up videos, as well as a number of his more fiery posts, including one where he called out his “haters” directly, and told them they can “literally suck my fat f*cking c*ck.” 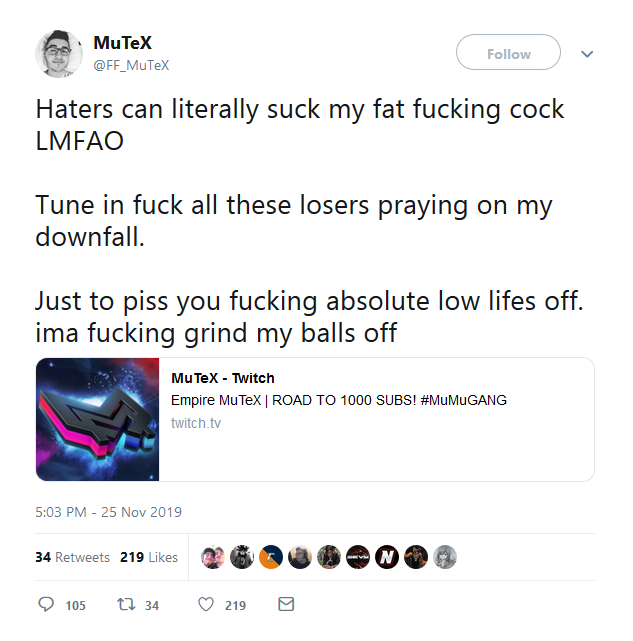 Just one of numerous deleted Tweets from the controversial SnD analyst.

In an official statement from the organization on November 25, Dallas Empire addressed the release of MuTeX and outlined the reasoning behind the decision.

“From the moment our organization signs an individual to compete at the highest levels of esports, we expect he or she to exhibit a standard of professionalism in-competition, on-stream, and in personal conduct,” the team stated.

Though his obscene rant served as the catalyst for much debate within the Call of Duty community, it’s evident that MuTeX was not in line with the standards set forth by the Team Envy-owned Call of Duty League franchise.

Immediately making a mockery of the situation at hand, Call of Duty veteran and member of the Toronto Ultra franchise, Anthony ‘Methodz’ Zinni, chimed in and sarcastically recreated MuTeX’s rant.

“Guys I’m so sorry, I know I just completely destroyed my entire career,” he started before transitioning to a less apologetic tone. “You will never find someone as experienced and as good at SnD than me, Dallas Empire this is an L.”

my name is mutex pic.twitter.com/RsiYeKt6T2

Wrapping up his heated spiel, MuTeX addressed the Call of Duty community directly, cursing every other word.

With numerous Call of Duty icons across various franchise teams expressing their stance on the recent controversy, it’ll be fascinating to see if any organization will risk signing the vitriolic SnD analyst moving forward.