Day three of the Call of Duty World League Championship 2019 wrapped up on August 16, and four more teams saw their CoD Champs journey come to an early end.

The start of bracket play at CWL Champs 2019 could only mean one thing – casualties, and there were four of them on the first day of the Championship Bracket.

Splyce, Team Envy, and FaZe Clan all failed to win their first round match in the Losers Bracket, meaning that they have now all been eliminated from the $2 million competition.

While they all will be disappointed in their placement, FaZe getting knocked out this early definitely comes as a major surprise, as they came into the week being one of the favorites to hoist the majestic trophy on Sunday.

Unfortunately, the road stops here for all four squads, who have officially placed 13-16 and will be taking home $25,000 each. You can check out the full final placements and prize split in our CWL Champs 2019 Final Placements hub. 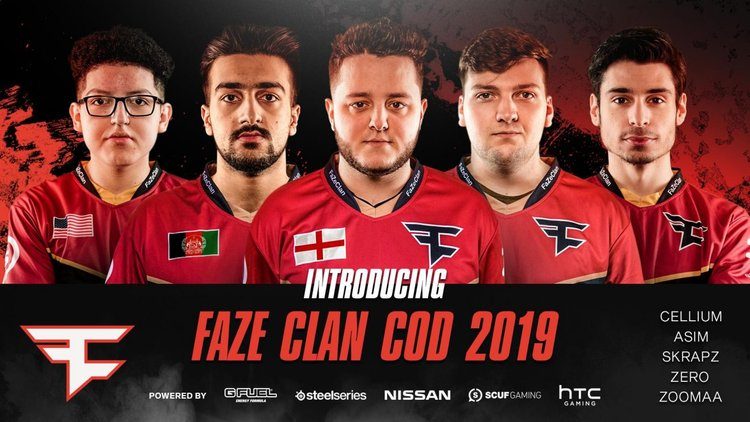 After restructuring their roster mid-season, FaZe Clan were unable to make it out of the first round at Champs.
[ad name=”article3″]

The first Losers Bracket match of the day was between Team WaR against Splyce, who came into the matchup as heavy favorites to advance.

The back-and-forth series ended up going to game five Search & Destroy, as WaR took the first Hardpoint and Control, while Splyce won the first S&D and the second Hardpoint.

The fifth map went all the way to a round 11, and with everything riding on the line, the amateur side had just a bit more clutch factor to seal Splyce’s fate.

While they did not have the greatest of seasons this year, Team Envy’s roster still featured three players who won it all at last season’s Champs.

However, that experience was not enough for them to surpass Team Singularity, the amateur team that has been one of the biggest surprises at this year’s tournament.

The match started with Singularity taking a quick 2-0 lead after winning Arsenal Hardpoint 250-163 and Payload S&D 6-4. A strong Arsenal Control from Envy put them on the board, but their AM opponents put the match to bed on Gridlock Hardpoint 250-155.

Following pool play, you would be hard-pressed to find anyone that predicted a Losers Bracket first round meeting between powerhouse teams 100 Thieves and FaZe Clan.

However, after both were stunned in their Winners Bracket matches, that ended up being the matchup, and it ended up producing an unforgettable series that people will be talking about for the rest of CoD esports history.

Having built a 2-0 overall lead and a 2-0 round lead in the third map Control, FaZe were essentially one kill away from knocking out 100T and advancing to the next round.

Instead, they allowed 100T to steal the Control from under their noses, which gave them the momentum and confidence needed to pull off one of the greatest comebacks in Champs history.

:frustrated: @100Thieves pull it OUT!!! They take the Control and extend the series one more map against @FaZeClan.

An under-the-radar match turned into a fascinating battle, which unfortunately, was overshadowed by a lengthy delay due to technical issues.

Elevate jumped to a strong 2-0 lead after taking the first two maps, but that start was reciprocated by the Spanish side, who won the next two games to force a fifth map.

Unlike the 100T vs FaZe match, however, a reverse sweep was not to be on the cards, as Elevate took the game five S&D to eliminate Heretics.

Check out the full Championship Brackets by visiting our CWL Champs 2019 Winners and Losers Brackets, and follow all of the action live via our dedicated CWL Champs 2019 hub, which features both livestreams, updated scores, and more.