So far, the season’s penultimate event weekend has featured as much entertainment and standing shifting as one could imagine, with upsets and drama galore. While there weren’t any internet issues like yesterday, the New York Subliners were shockingly knocked out of action by the Paris Legion while the Florida Mutineers had to claw back into Sunday’s slate of games after being reverse-swept by the hosting London Royal Ravens. 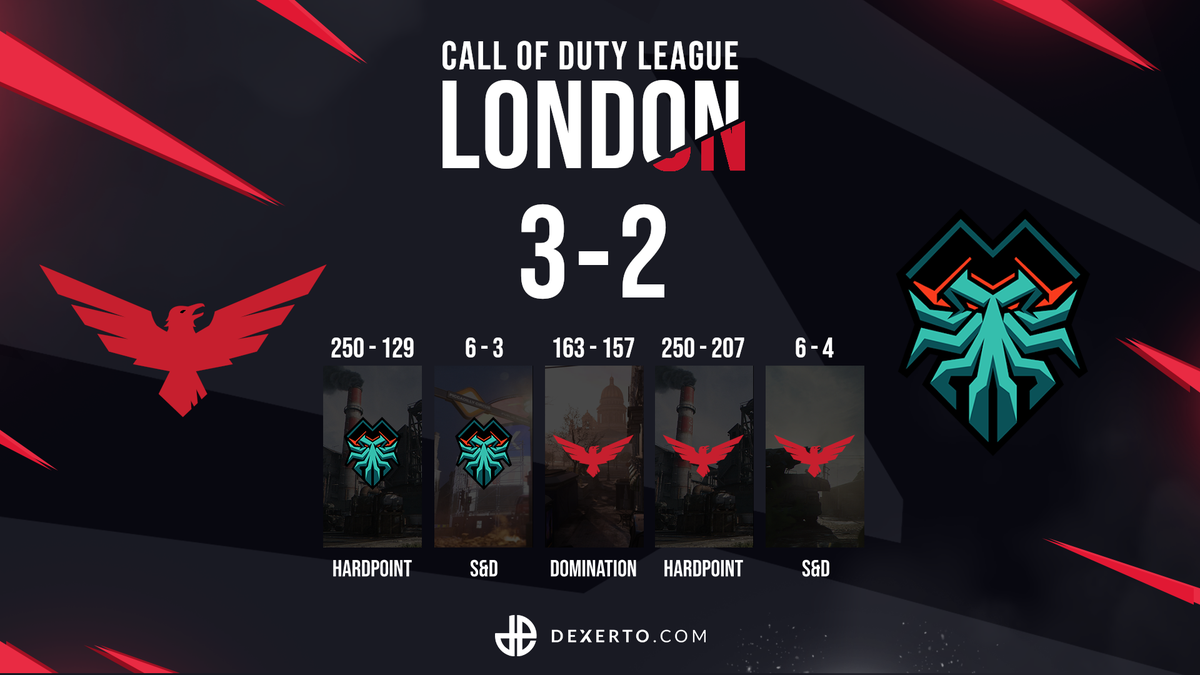 The Royal Ravens don’t care if their opponent has twice as many CDL points or even if they have a 2-0 lead. The (virtual) home team pulled out the clutch factor with a reverse sweep of a Florida roster that hadn’t lost a match since Joseph ‘Owakening’ Conley was added to the lineup.

With a tremendous, balanced team performance, London was able to break the Mutineers’ hot streak and send them off to the losers’ bracket while locking in a semifinals spot on Sunday. And it all started down 2-0 with a tight, single-digit win that kept the Royal Ravens alive and swung momentum in their favor.

A nail-bitter of Domination ends 163-157 with London @RoyalRavens claiming the win. 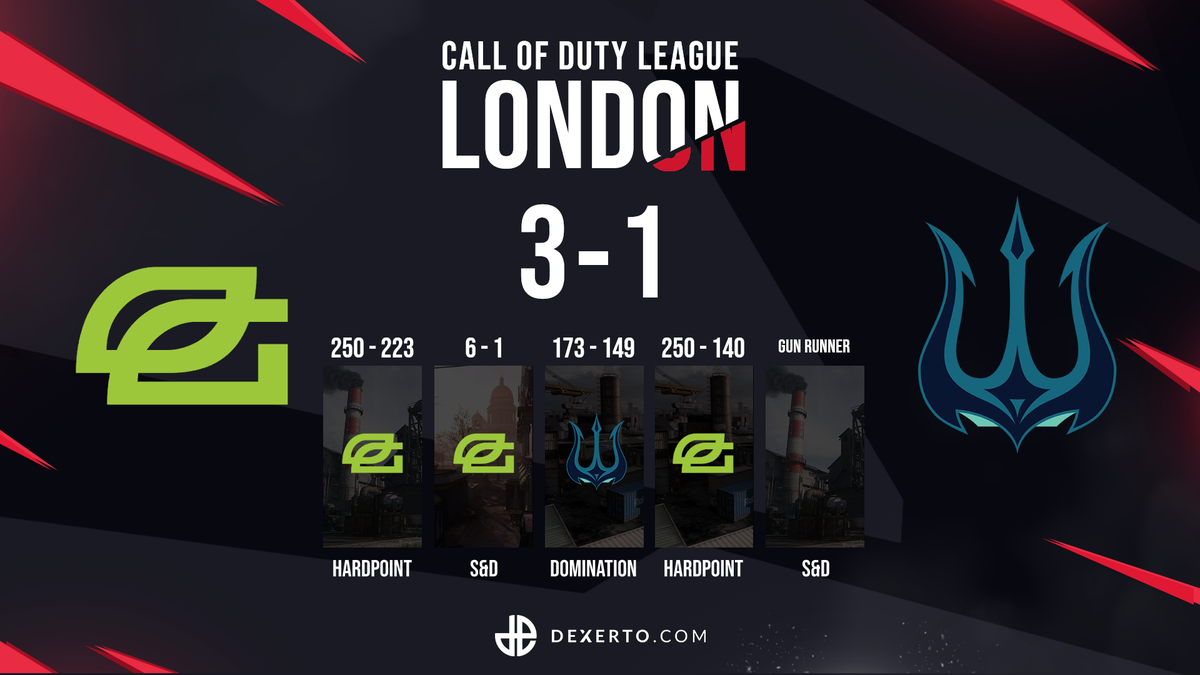 Friday was a big day for both OGLA and the Surge, as the former debuted two new starters and the latter went through more internet controversy than an episode of Silicone Valley. But OpTic’s new players, Zack ‘Drazah’ Jordan and Darien ‘Hollow’ Chverchko, helped mold a successful new identity for the team — the Surge were unable to turn their anger into winning momentum.

Although Seattle lost 3-1, the team did get to enjoy one cathartic moment, as Sam ‘Octane’ Larew pulled off an unbelievable 1v4 clutch during S&D and snuck in a quick victory lap. A nice moment in what was ultimately a lopsided affair. 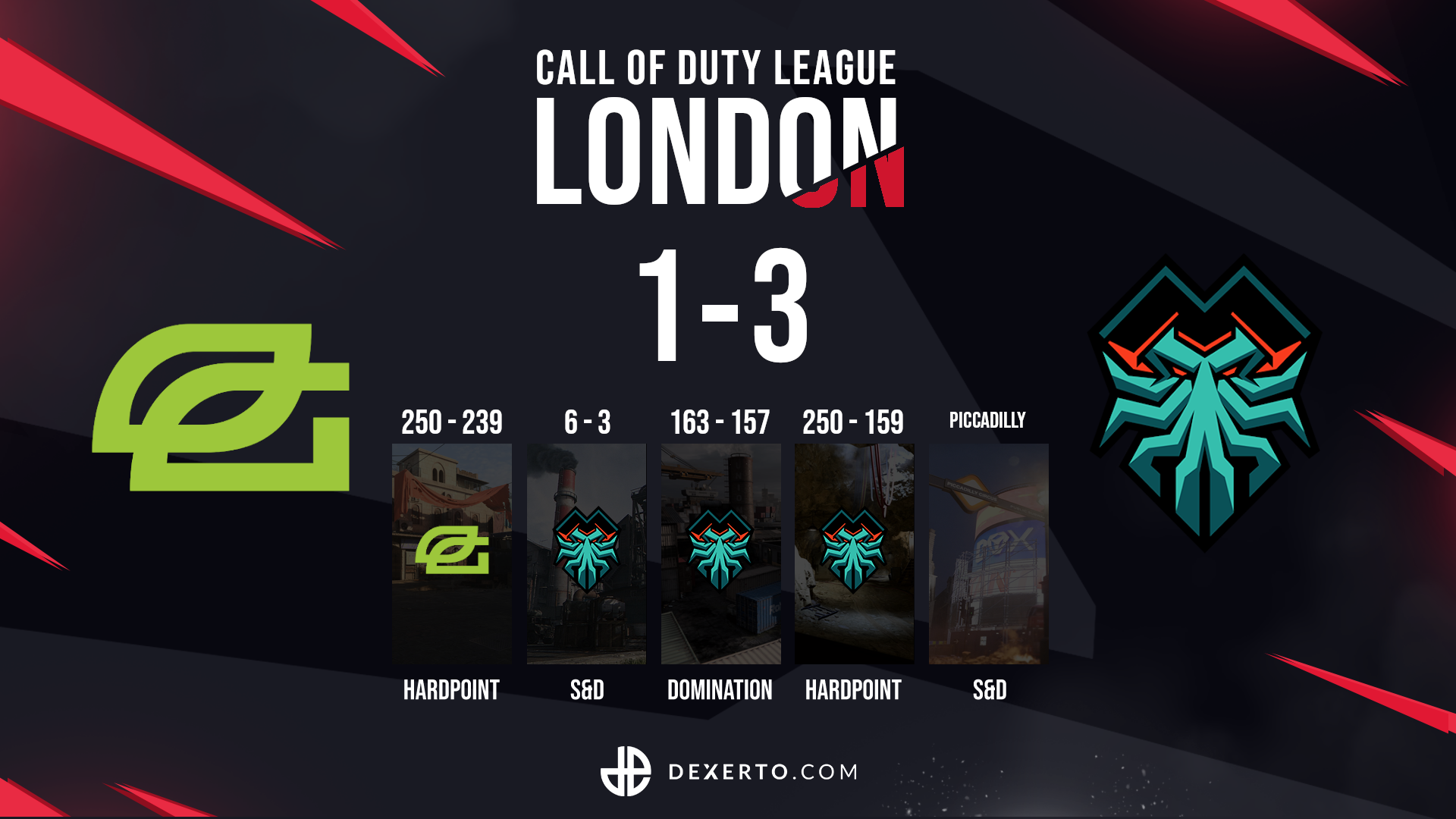 Until their loss to the Royal Ravens, the Mutineers were on an absolute tear. That shakiness seemed to persist as OGLA won a tight first map, but Florida kicked it back into gear with clutch performances across the roster as well as some consistent lethality at the hands of Owakening and Maurice ‘Fero’ Henriquez.

Playing Florida twice in your new lineup’s first event is a tough draw, so OpTic should be content with how competitive they kept each series. Florida, meanwhile, gets a trip to the Sunday semifinals and confirmation that the team is now locked in for a first-round bye, at least, in this season’s Champs.

Four kills from @ColtHavok in the final round push @Mutineers to a 6-3 S&D W. 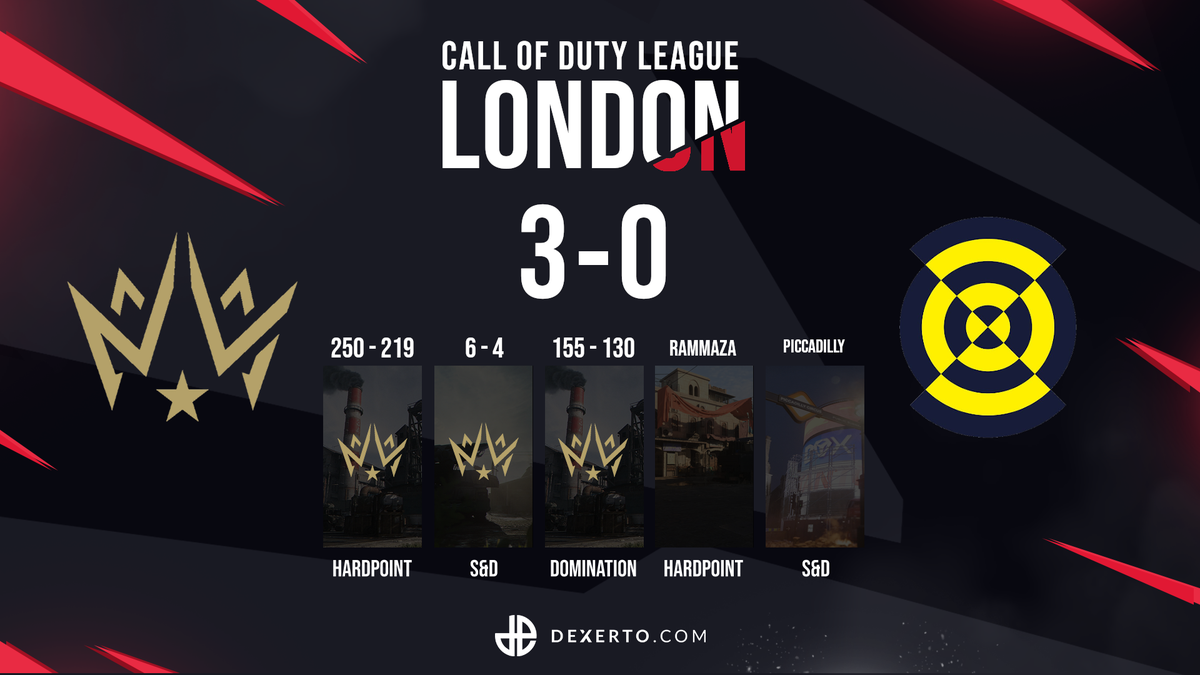 The day’s most highly anticipated matchup ended up being one of its most disappointing, as the Empire looked completely comfortable ending New York’s 12-map winning streak and sweeping them into the losers’ bracket.

While each map was somewhat close, the Subliners never truly seemed to gain momentum. Dallas, meanwhile, seemed so unconcerned that Ian ‘Crimsix’ Porter even brought out the Grau for a very rare appearance outside of Verdansk. But, with Indervir ‘iLLeY’ Dhaliwal rocking the sniper on S&D, Anthony ‘Shotzzy’ Cuevas-Castro proved why Dallas continues to stroll into Championship Sundays: their SMG players have ice in their veins. 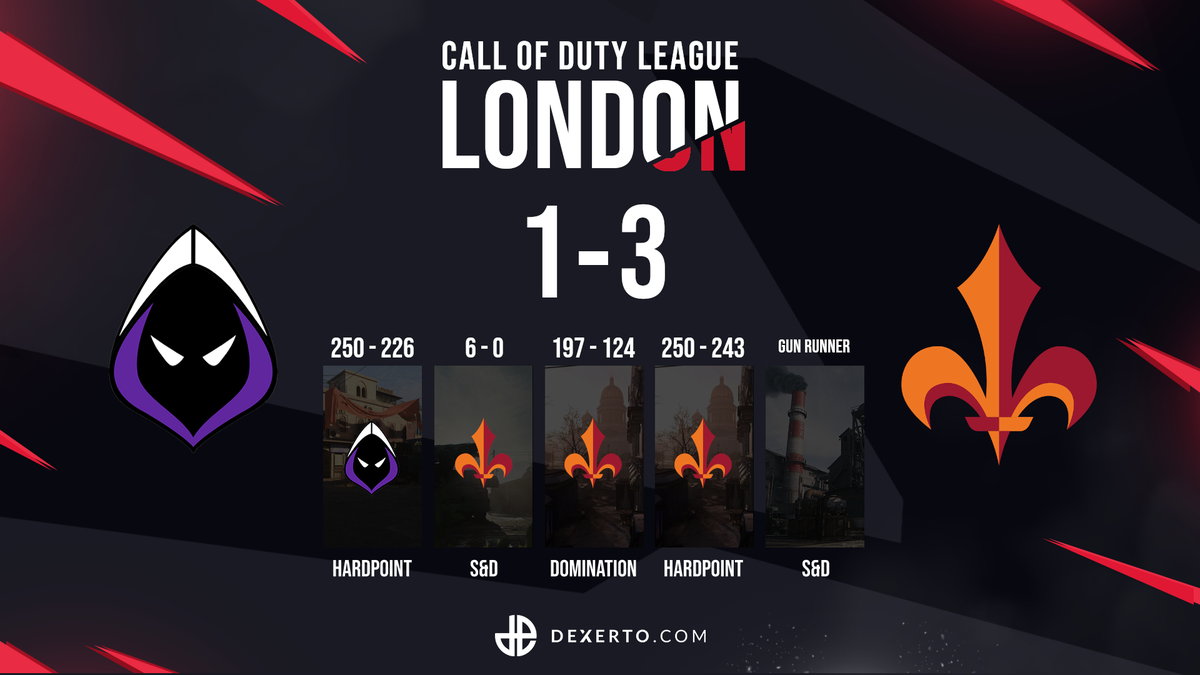 Last week, the Legion swept the Guerrillas for their first win in what felt like an eternity. This week, Los Angeles tested them but the result ended up being the same as Paris’ pure domination on S&D shifted the entire series in their favor.

With Luke ‘Louqa’ Rigas clicking heads as the S&D sniper while Matthew ‘KiSMET’ Tinsley and Denholm ‘Denz’ Taylor slayed out on respawn maps, Paris appeared to nestle into a strong rhythm — at the expense of the Guerrillas. It was Paris’ first St. Petrograd Hardpoint victory this season and the cementing of a 12th-place finish for the Guerrillas in 2020. 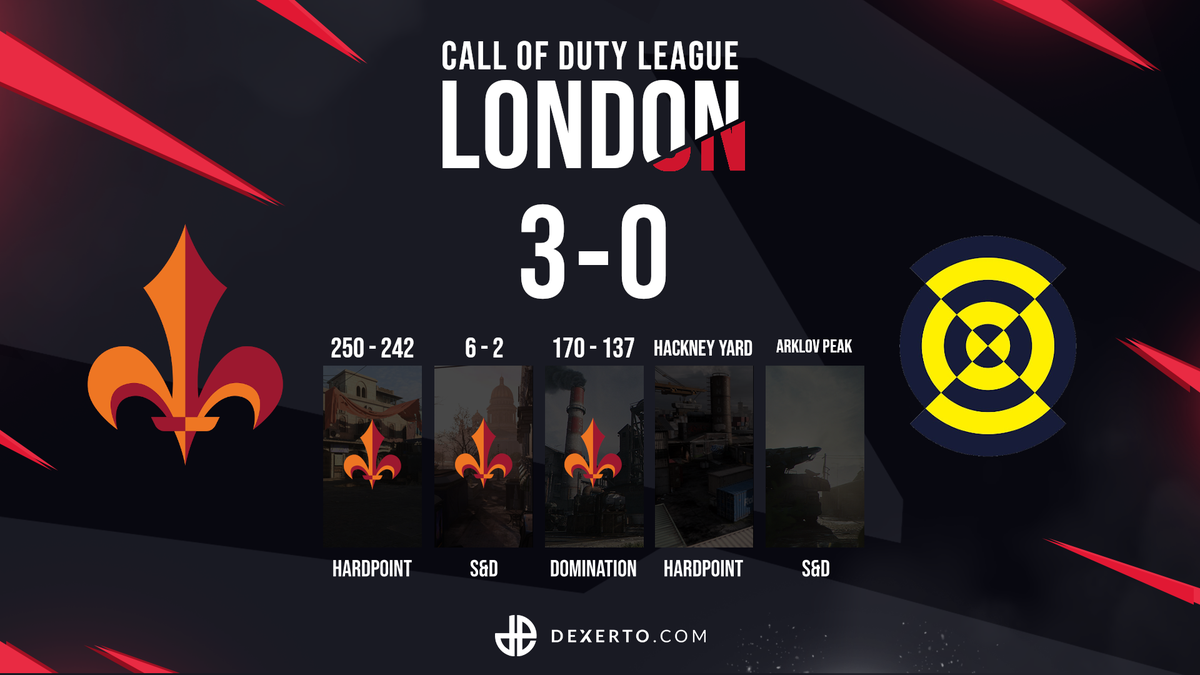 An absolute shocker. Before today, the Legion had been considered one of the league’s worst teams while the Subliners had proven themselves, just last week, to be among its best. New York’s 3-0 loss against an imposing Empire roster was disappointing but somewhat understandable, this sweep was on a completely different level.

A rough note to end the season on, but the Subliners have done enough this year, with 140 CDL Points, to ensure a Winners’ Bracket Round 1 seed for August’s Champs. The Legion still have more work to prove, but their Day 2 performances showed impressive poise and balanced control over their preferred maps.

Can the Mutineers win a third consecutive Home Series? What didn’t feel feasible at the start of Day 2 now most certainly looms as a possibility. But first they’ll need to beat an Empire lineup that looks remarkably comfortable in this new meta.

The Royal Ravens feel like a lock to beat the Legion on one side of the semifinals, but so did the Subliners — so that feels impossible to predict. Conversely, the Empire and Mutineers matchup presents an entirely different conundrum. Each is an obvious top-tier team with 17 wins and each has been dominant online.

Dallas does seem to benefit most from their SMG stars, iLLeY and Shotzzy, while Florida’s strength often stems from Owakening’s impact on AR, so this matchup will be a riveting one for fans curious to see how this new meta plays out at the highest level. 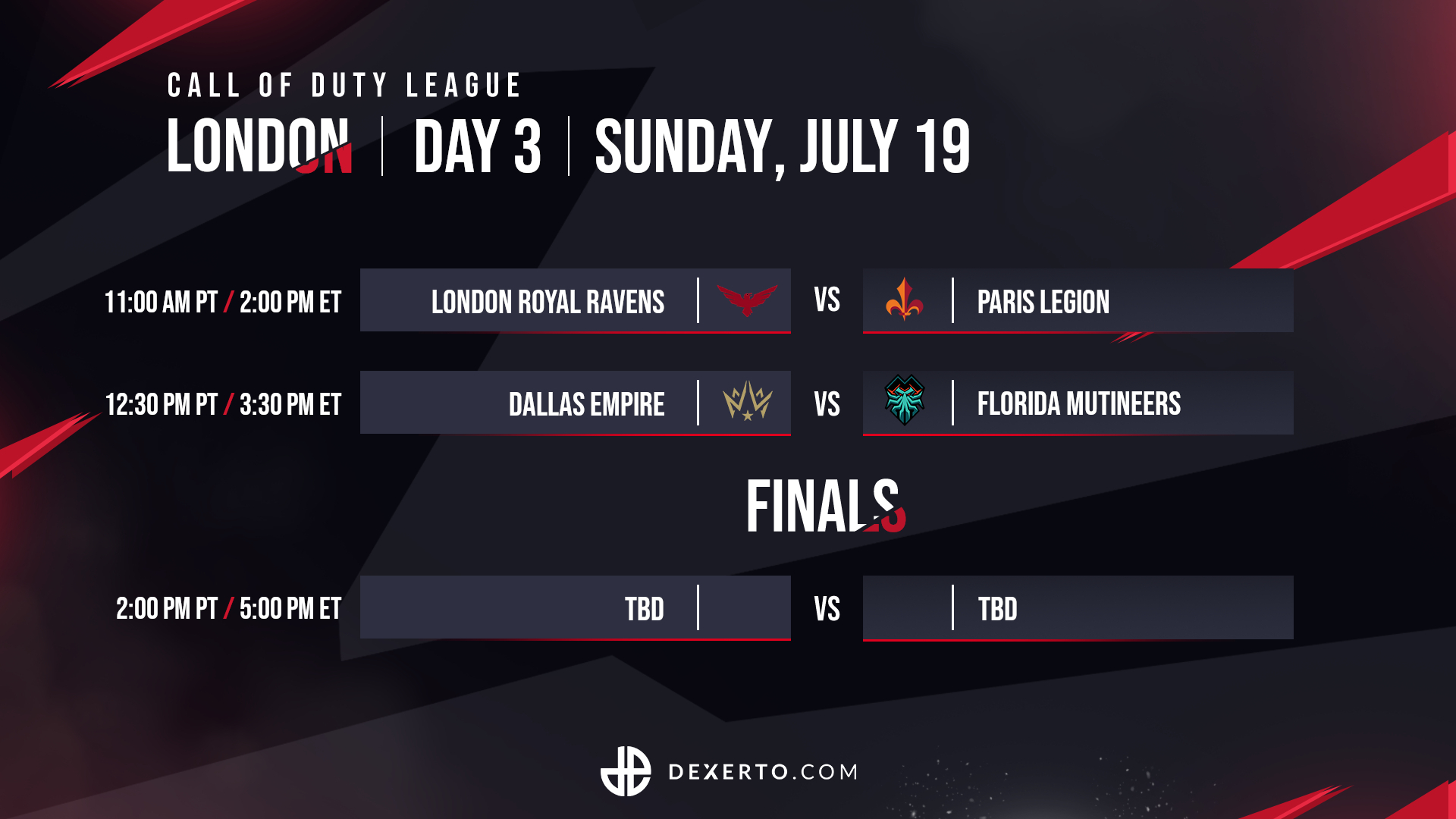 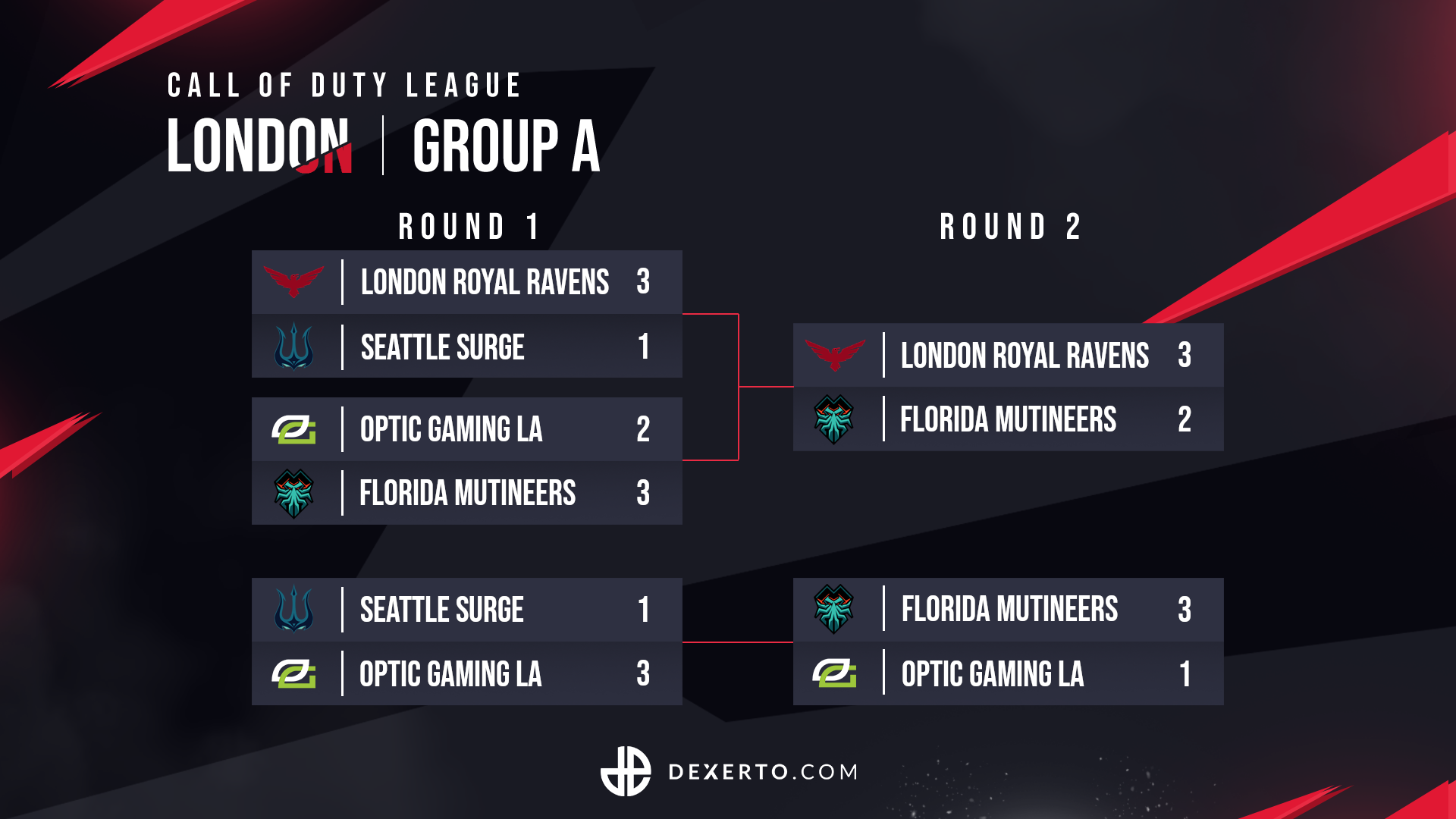 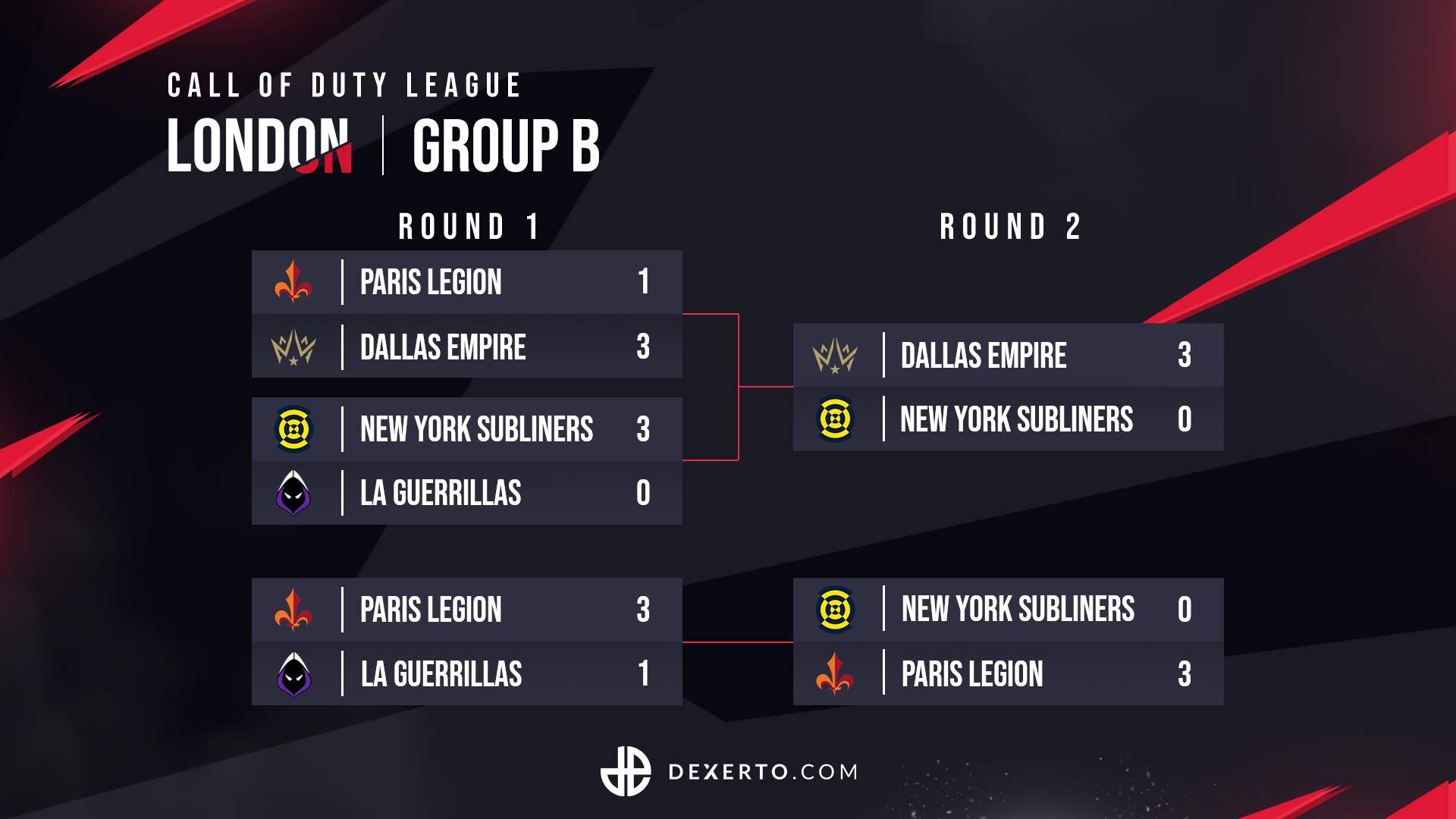 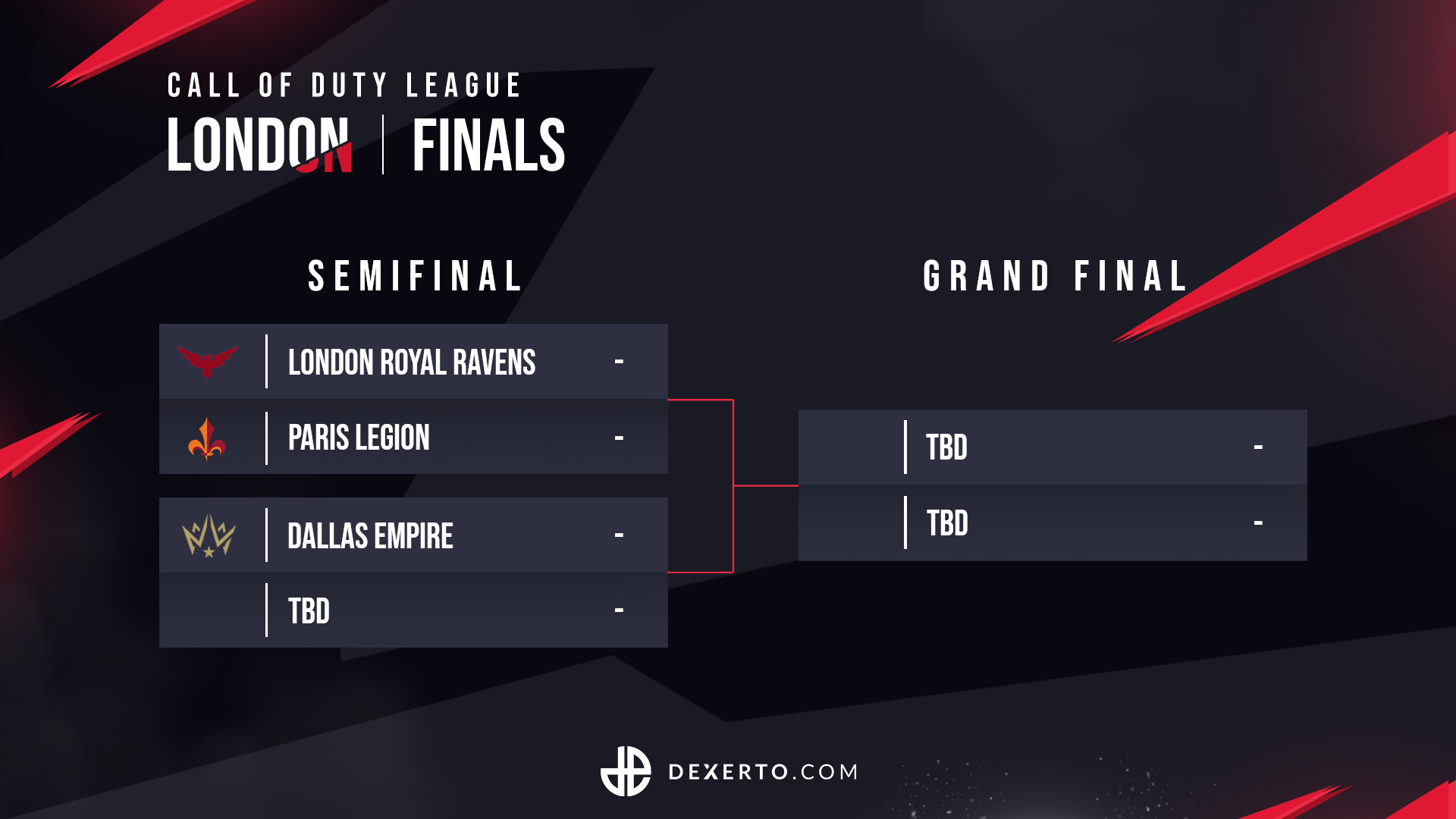 Remember, you can keep up with all of the Call of Duty action and watch these matches live via our London Home Series hub, which includes live streams, updated scores, brackets, and more.