Day 1 of the Call of Duty League’s London Home Series is now in the books, and things are getting more and more intense heading into the weekend portion of the tournament.

While elimination is never a threat on the first day of a Call of Duty League Home Series, how each team performs determines what situation they’ll be in once the next set of matches rolls around.

Following the four day one matches of CDL London, the Royal Ravens, Dallas Empire, New York Subliners, and Florida Mutineers will be playing for a semifinal spot on Saturday, while the Seattle Surge, Paris Legion, Los Angeles Guerrillas, and OpTic Gaming LA have to face the danger of getting knocked out in the first round. 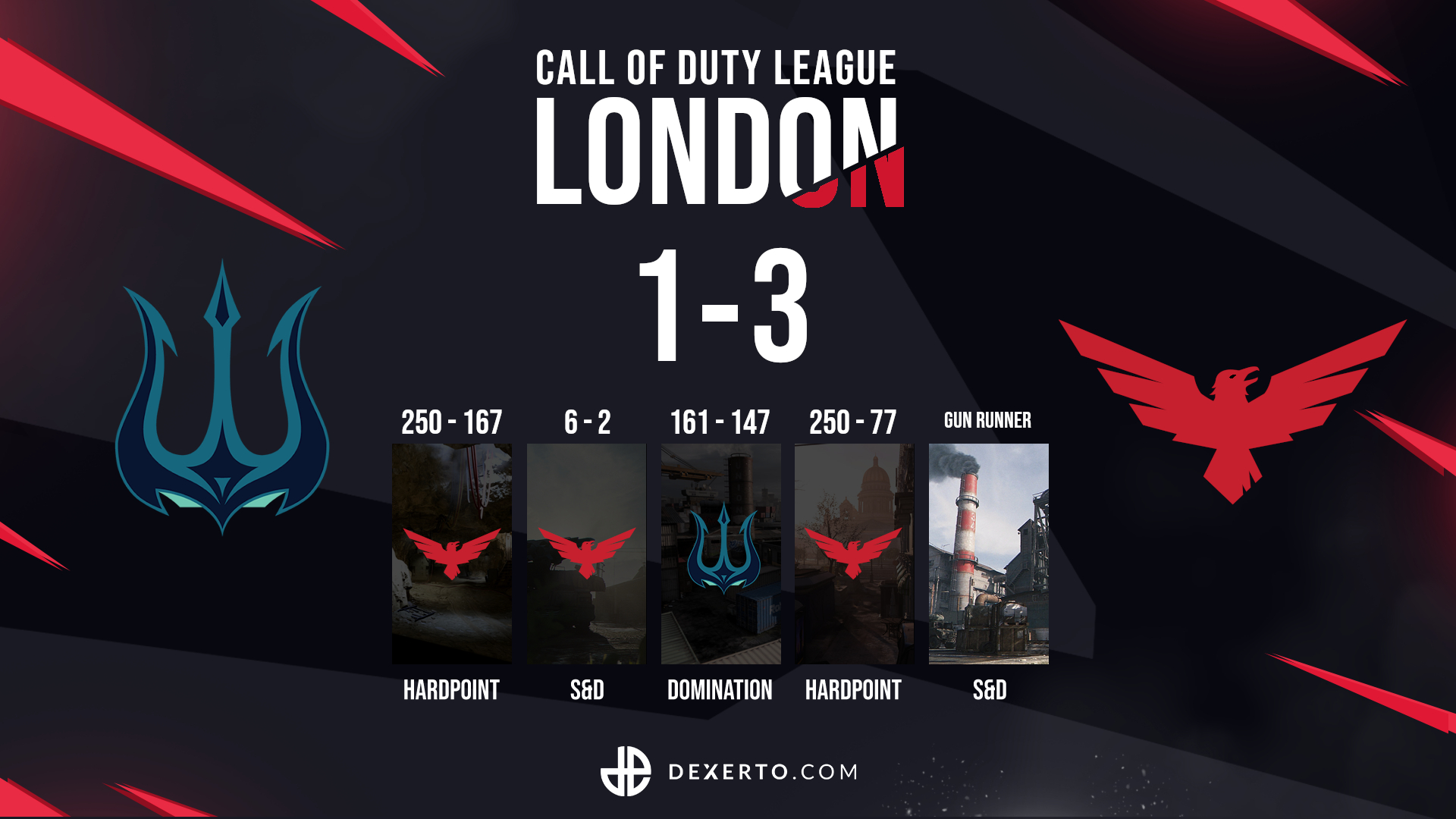 Controversy struck early at CDL London, once again involving the Seattle Surge, who had to play the game four Hardpoint on St. Petrograd a man down after Slacked was having some internet issues.

According to Slacked, the league did not allow the map to be replayed because internet disconnections are deemed to be the player’s fault, so the result stood, stopping any hopes of a reverse sweep and giving the hosts a 3-1 win.

Following the match, Octane, who has been quite outspoken in his criticisms of the CDL before, went on an enraged, profanity-laced rant against the league, as his team has now lost six out of their last seven. 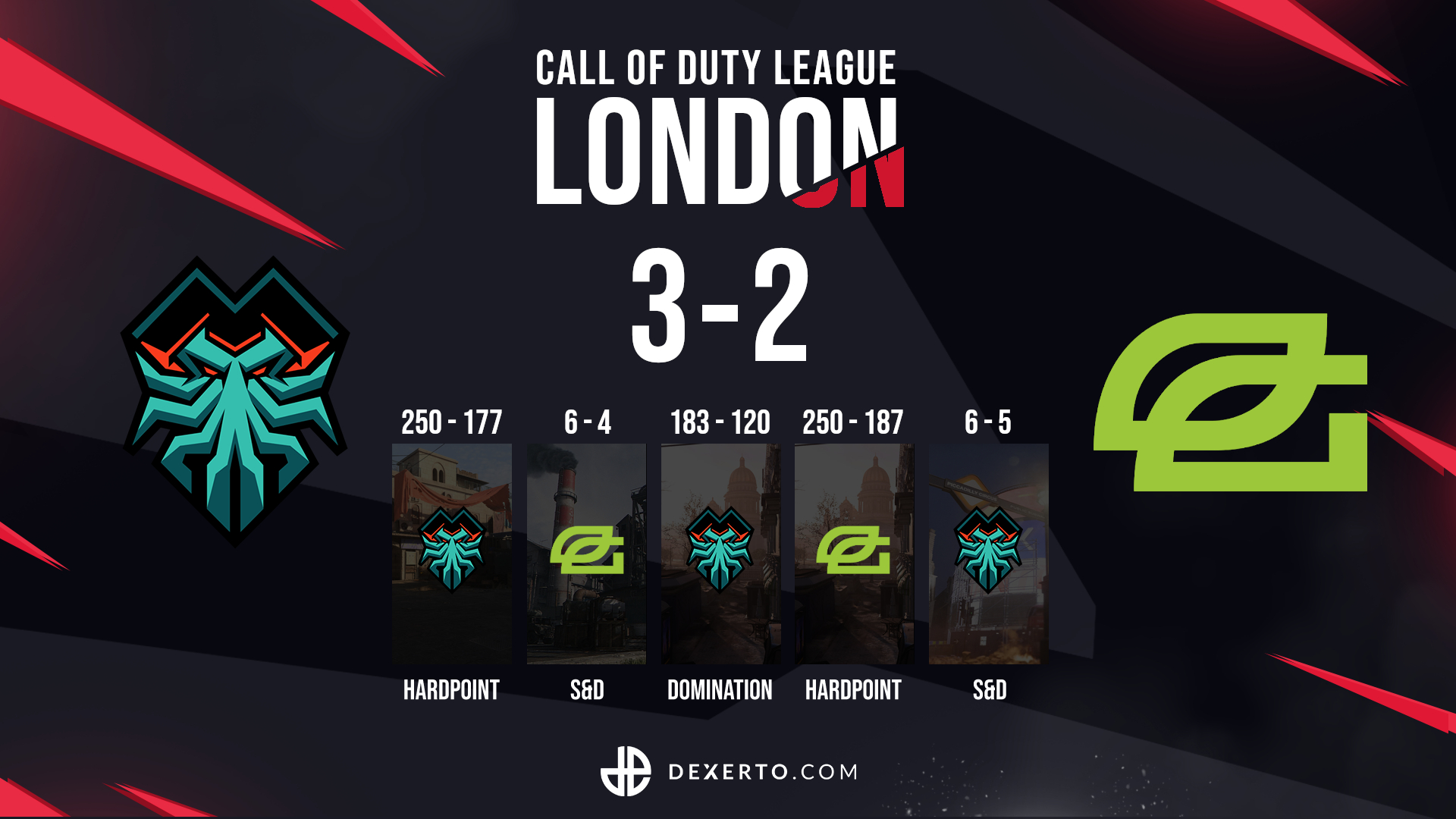 This was, by far, the series that most fans were looking forward on Friday, as not only were the three-time champions Mutineers back in action, but, perhaps more importantly, it was also the debut of OpTic Gaming’s new-look roster, featuring rookies Drazah and Hollow.

The match was an instant classic, going all the way to a game five, round 11, but it was Florida’s championship experience that ultimately gave them the edge at the very end, extending their winning streak to a CDL-high nine matches.

Florida @Mutineers take it!@OpTicGaming Los Angeles get it all the way to game 5, round 11, but Florida pull through to close the opening day at the London Home Series.#FearTheDeep | #CDL2020 pic.twitter.com/TNvZktyW6D

Despite the loss, which was OpTic’s fourth in a row, the Green Wall will at least find the silver lining in how well their new signings played against such tough opposition, especially while facing the pressure of replacing a superstar like Dashy and a veteran like Chino.

Drazah went a combined 81-78 in both the Hardpoints, including a 30-kill performance in game four, and both he and Hollow yielded a positive K/D in the two Search and Destroy maps – 18-17 and 18-15, respectively. 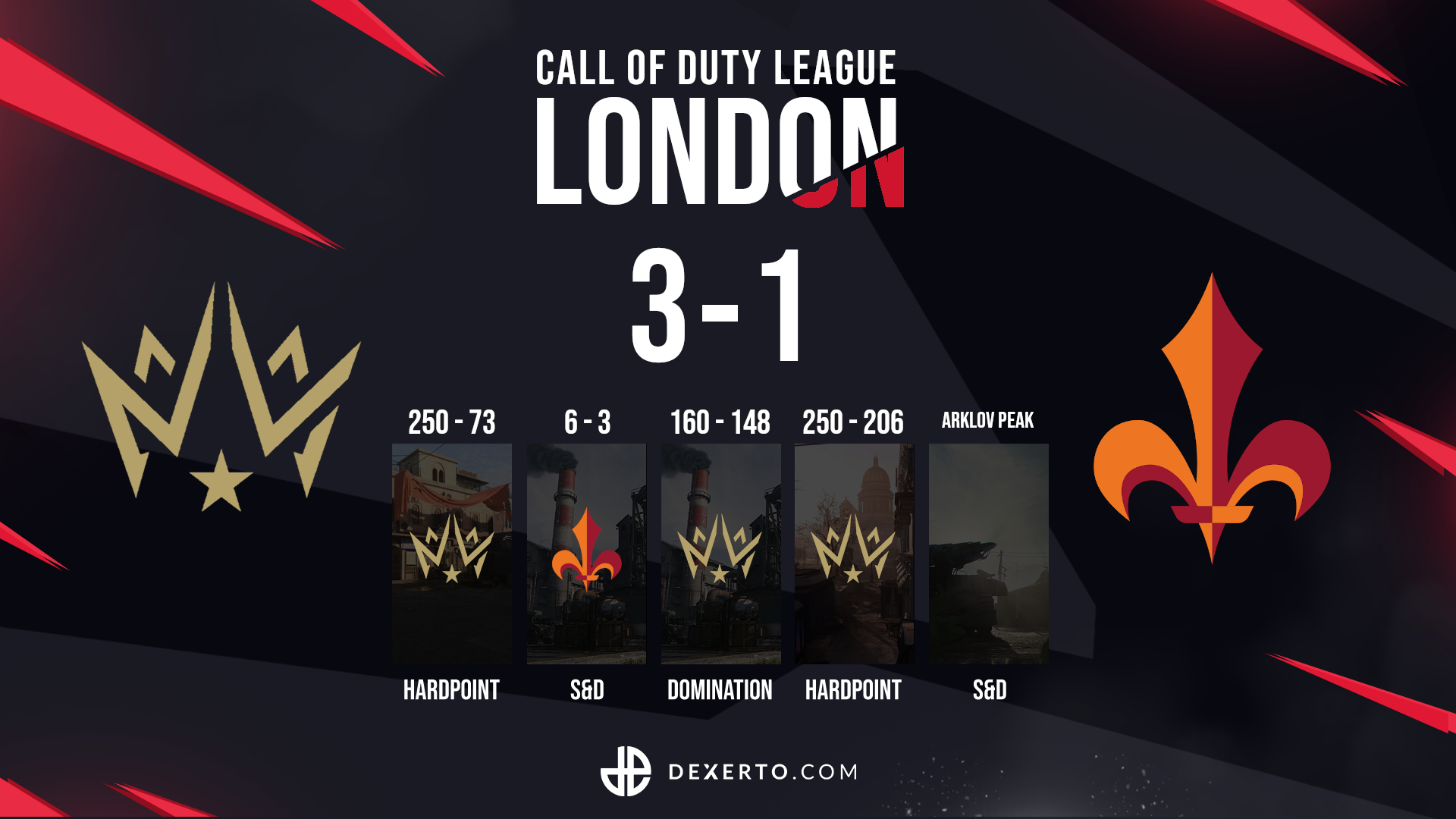 The series spelled doom for the Legion from the very beginning, as Empire took an unbelievable 116-0 lead on their way to handing Paris perhaps the most one-sided Hardpoint loss of the season.

The Europeans did tie things up with a win on Gun Runner S&D, which continues to be their one bread-and-butter mode, but Dallas were simply too strong in the respawn maps and took care of business with a 3-1 victory.

The loss is Paris’ 11th out of their last 12, a massive slide over the past three months that has seen the team drop all the way down to ninth in the standings, and possibly even lower after this weekend.

The closer from @iLLeYYY!@DallasEmpire wrap up the 3-1 series win over @ParisLegion to open their London Home Series run.#BuildAnEmpire | #CDL2020 pic.twitter.com/iPpHFhYYBo 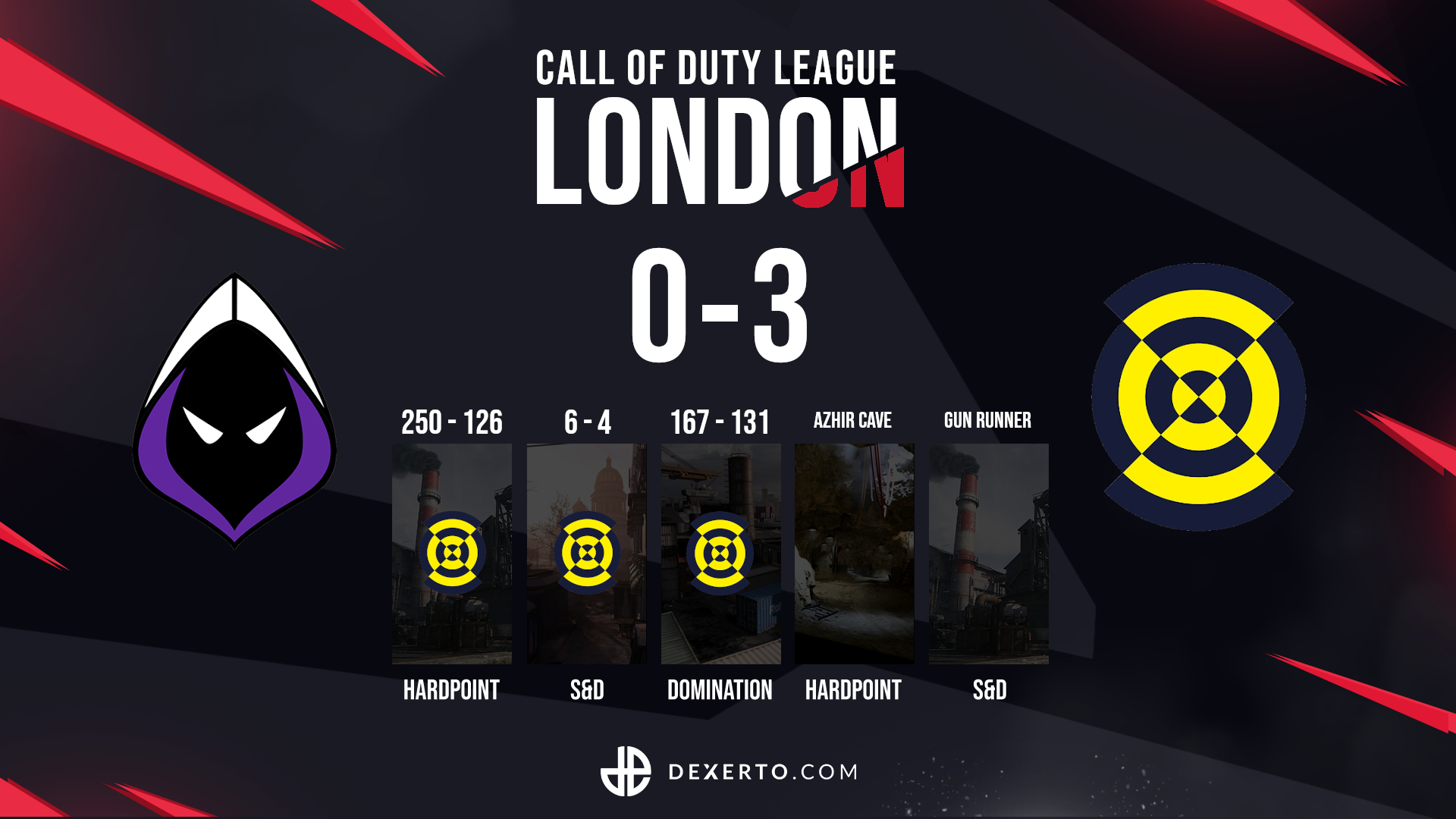 Fresh off their first-ever CDL tournament victory at their own Home Series, the Subliners demolished Guerrillas and fired a warning shot to the rest of the league that they’re still in championship form.

The match was pretty much over as soon as it began, New York started off hot on all three maps and never gave Los Angeles the chance to gain a foothold in the series. NYSL have won their fourth-straight opening match in a row, as they’re now one more victory away from their fifth consecutive semifinals appearance.

As for Guerrillas, the loss was their fourth in a row, as they’ve now dropped eight consecutive maps and are in danger of sealing their fate as the league’s lowest-seeded team heading into the Playoffs.

New York @Subliners are relentless with a 6-4 S&D victory.@LAGuerrillas in danger of being swept going into Domination: https://t.co/8g63ELlRWL#NYSL | #CDL2020 pic.twitter.com/pHjAhcxyI0

Looking ahead to Day 2 of CDL London

With Day 1 now wrapped up, the stage is set for what should be an exciting and intense set of matches on Saturday. In Group A, the hosts, Royal Ravens, will face the three-time champion Mutineers for a spot in the semifinals, while Surge and OpTic Gaming will make up the first elimination clash.

As for Group B, Empire and Subliners both look to stamp their ticket to the next round as the two powerhouse sides will do battle for the first time since Dallas won way back in early March, at the Los Angeles Home Series.

For the second-straight event, Legion and Guerrillas will meet in the first round of the lower bracket. At CDL New York, Paris swept LA to survive, but the series was a lot closer than the final 3-0 scoreline would indicate. 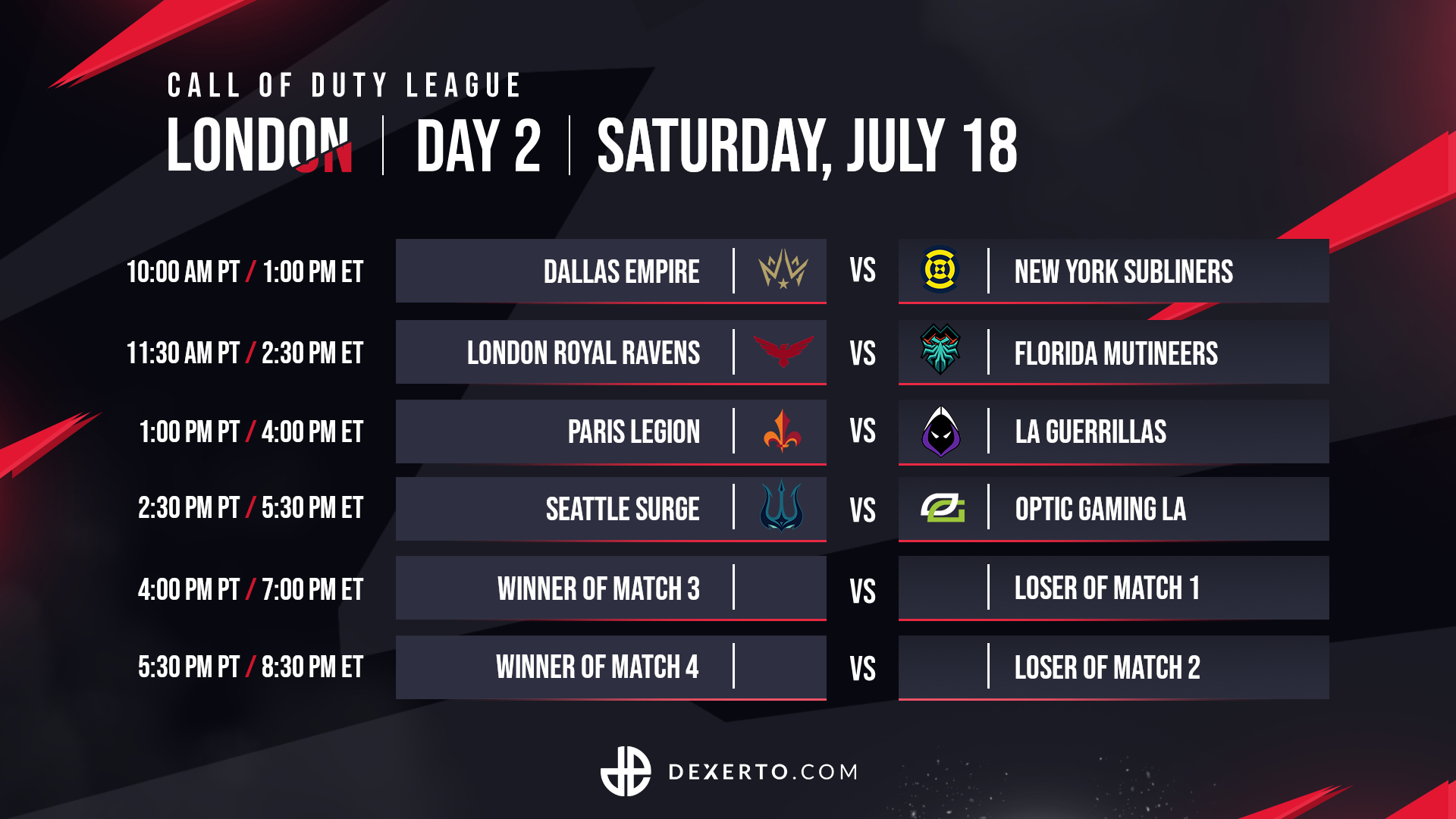 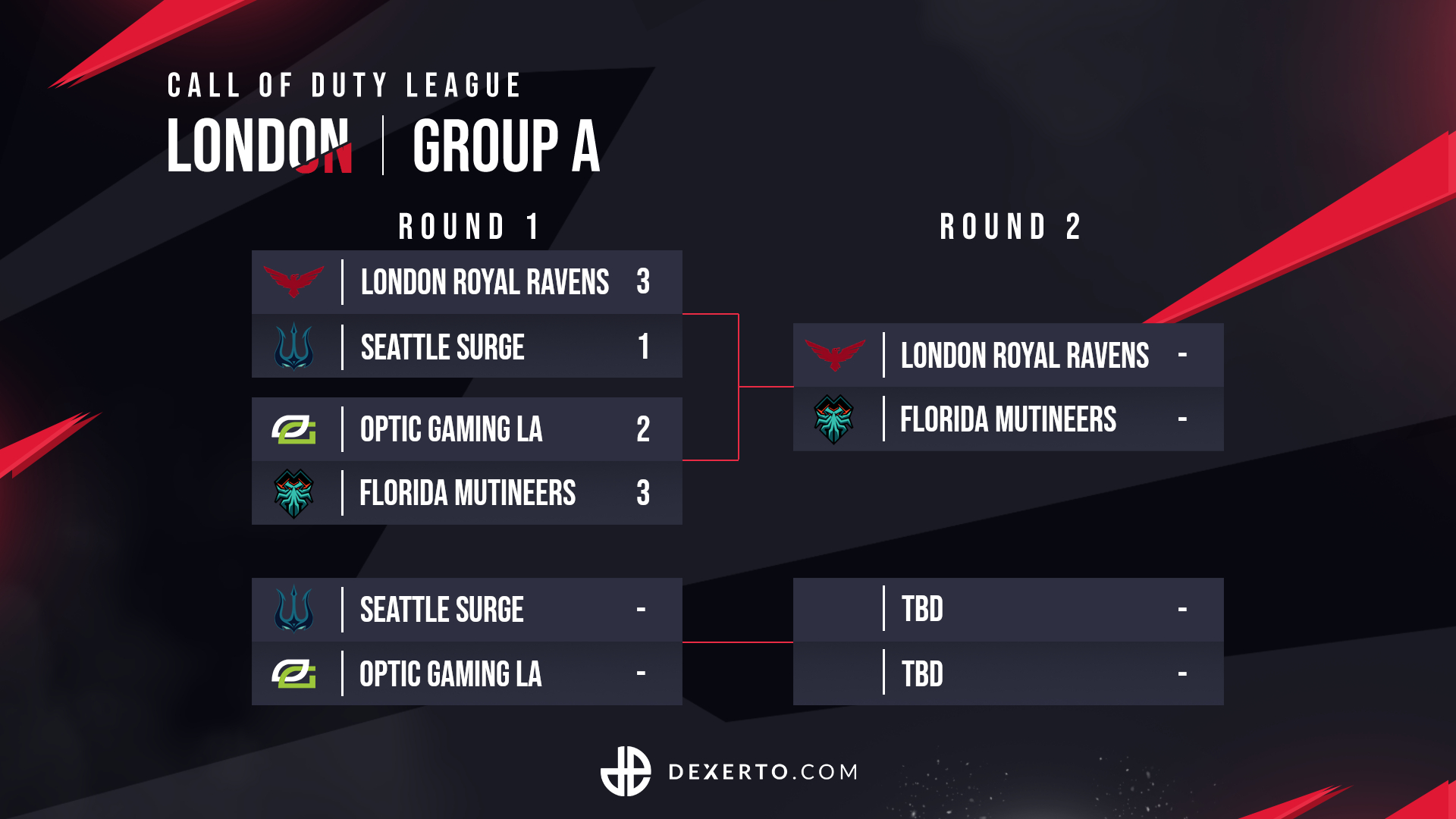 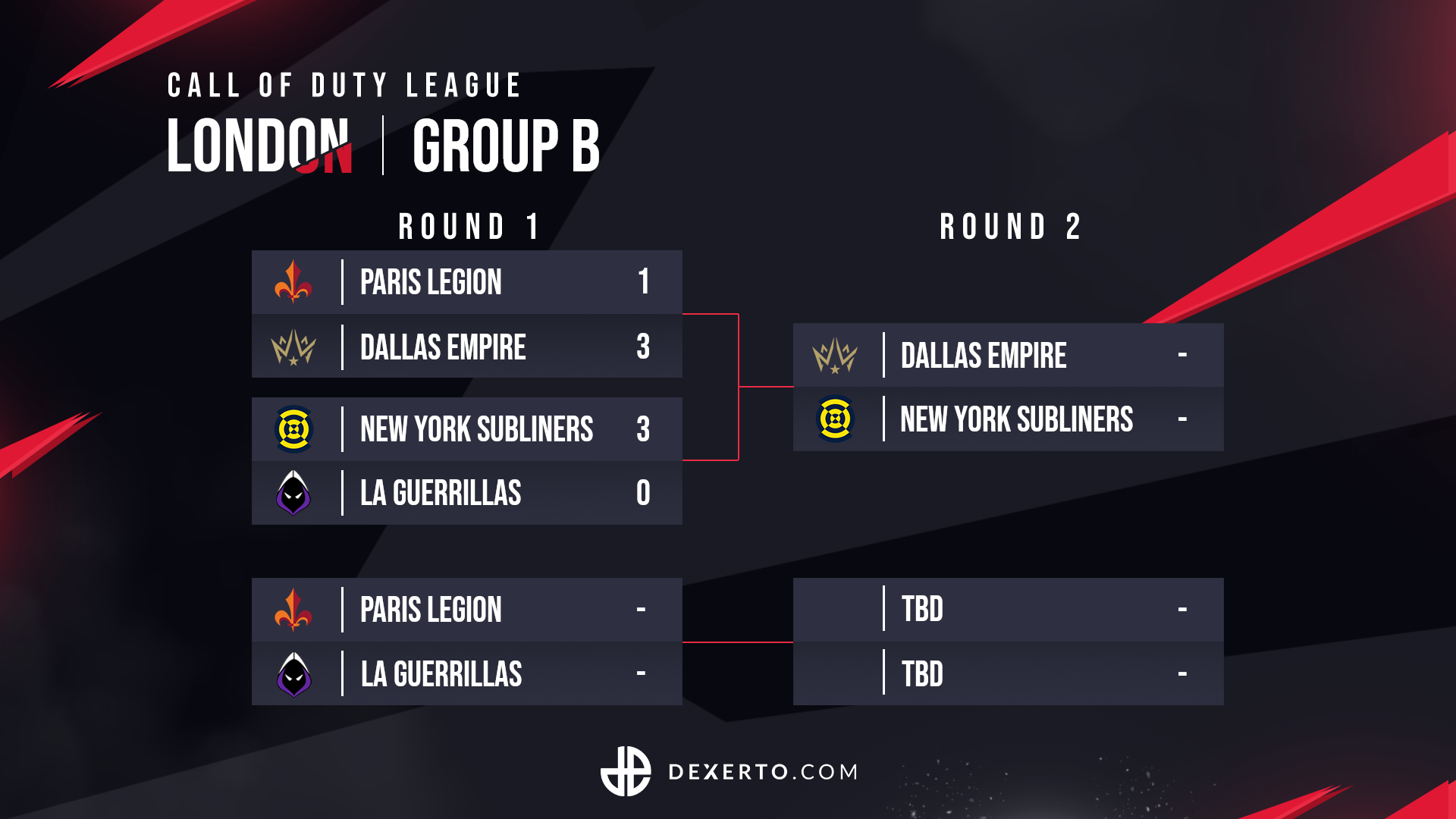 Remember, you can watch these matches live and keep up with all of the Call of Duty League action via our CDL London Home Series hub, which includes streams, updated scores, brackets, and more.