The May 7 Call of Duty: Black Ops 4 update brings Operation Spectre Rising to the Xbox One and PC. A new and improved Alcatraz also returns for all platforms.

Big update for Xbox and PC

Due to the PS4’s exclusivity period on new Black Ops 4 content, Operation Spectre Rising has yet to hit the Xbox or PC.

The May 7 update will bring all platforms the same content. 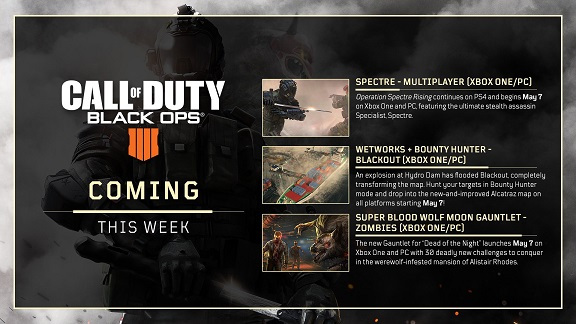 The latest operation adds, as the name suggests, Spectre as a specialist to multiplayer. His specialist weapon and ability, the Shadow Blade and Smoke, will add an additional element to Black Ops 4 multiplayer gameplay.

Spectre will also be available as a Blackout character but unlike multiplayer, won’t provide any discernible benefit.

Blackout does get a brand new Spectre based mode, however. The
Bounty Hunter Quads playlist centres around assassin first seen in Black Ops 3. The new mode has divided opinion though, with a lot of Call of Duty players frustrated Hot Pursuit has been removed as a result. 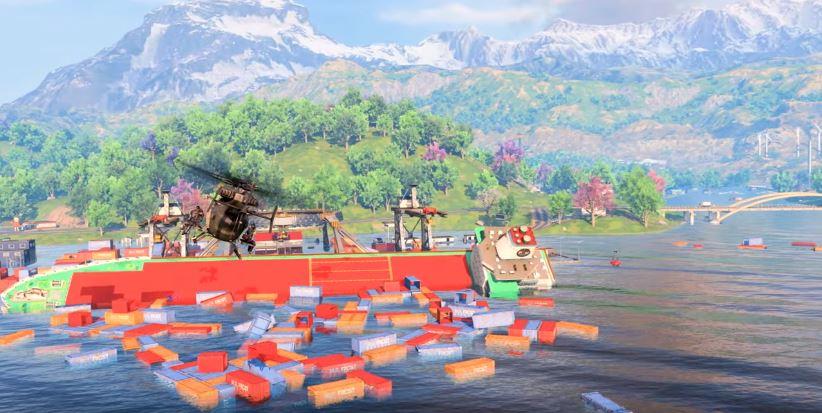 The Blackout map has been flooded!

Elsewhere, the Blackout map has got its biggest change to date. Due to an explosion at Hydro Dam, large areas of the map have been flooded.

This has caused areas such as Hydro Dam itself, Rivertown, Factory and to a greater extent Cargo Docks to become immerse under water. A lot of these flooded areas aren’t deep enough to swim in but they do change the routes you can take.

Zombies hasn’t been left either, with an entirely new mode being added. The new gauntlet for “Dead of the Night” launches with 30 deadly new challenges in the mansion of Alistair Rhodes.

The unique prop hunt mode in Call of Duty multiplayer is available on Black Ops 4 on PS4 now. It will come to Xbox One and PC on May 10.

Prop Hunt is back, and everyone at @Treyarch has been practicing. pic.twitter.com/W5lUMraVRO

Despite there being contrasting opinions on Blackout’s second map, Alcatraz, its removal from the game on April 30 was met with widespread disappointment.

Of course the new map offers a different take to battle royale than the traditional Blackout map, focusing on super fast-paced action and close quarters combat.

The dubbed improvements are expected to include altered final circle speed, the ability to “take the cowards way out” when bleeding out and potentially a change to the death box UX.

The poorly designed final circle had previously caused a lot of Alcatraz games to finish with heal offs. This was because the speed of the final circle didn’t allow players on different levels to fight. Instead, players would have a better chance of winning the game by simply finding the center of the circle and healing.

This change, along with a few others, might even win over some Blackout players who weren’t initially impressed with the map.

The full patch notes for the Black Ops 4 May 7 update are available now.

Below are the changes which affect all platforms.