The April 30 Call of Duty Black Ops 4 Spectre Rising update has added the Bounty Hunter Quads playlist to Blackout. This has come at the expense of Alcatraz and the much loved Hot Pursuit though.

Update: Treyarch have confirmed that Alcatraz will return with improvements on Tuesday May 7. There is still no response regarding Hot Pursuit.

Alcatraz is scheduled to return on Tuesday, May 7th with some new improvements! Bounty Hunter is this week's Featured Playlist until then.

Blackout’s first new map, Alcatraz, was released on April 2. Based on the real Alcatraz prison, the new map aimed to add some freshness to the battle royale mode.

While it certainly achieved that with its close-quarters combat fighting, the map did receive criticism as some felt it wasn’t conducive to the best and most organic gun-play.

Finding an Alcatraz game didn’t appear to be a problem, lobbies filled up at a consistently quick speed. Nevertheless, we don’t know how many players were playing the mode and therefore, numbers could have been on the low side.

Regardless, the Alcatraz playlist is currently available. Whether this was because of player count or Treyarch simply want to encourage their new Spectre based Bounter Hunter Quads playlist is unknown.

As yet there has been no acknowledgement of its removal or whether it will return.

Interestingly, a David Vonderhaar tweet revealed that changes to Alcatraz were scheduled for the latest Black Op 4 update but that they run of out time before deploying it.

We ran out of time. I love Alcatraz because it’s a real place and that makes it different. Real places are not always conducive to the best gun/gameplay. + https://t.co/lEuaO7Vap0

As part of the Alcatraz update, Hot Pursuit was removed from the Blackout playlist. This was met with frustration from all corners of the Black Ops 4 community.

Many felt Hot Pursuit was the perfect remedy to the sometimes slow-paced traditional battle royale format. The combination of care-package seeking sports cars, sensor-dart enabled police vehicles and most importantly, respawns at regular intervals, proved to be arguably Blackout’s most popular mode yet.

Treyarch realized their mistake pretty quickly and added Hot Pursuit back in a short time after. However, it appears they didn’t listen to their audience as much as they should have.

Since the Spectre Rising operation, Hot Pursuit has been removed. Even after a subsequent May 1 update, which focused on small improvements, Hot Pursuit is still absent. 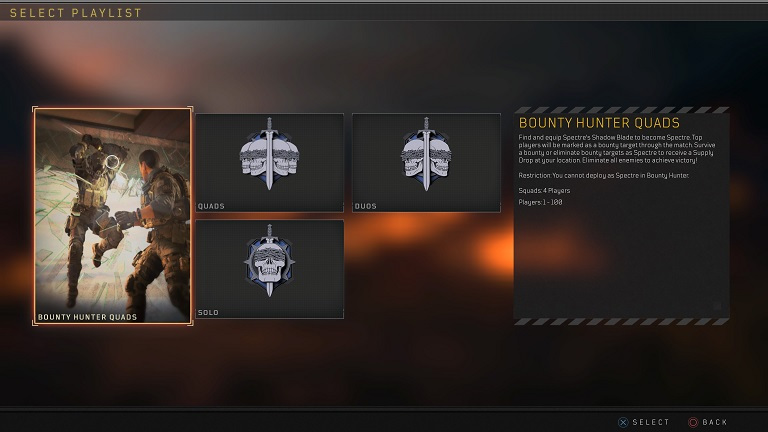 The Spectre-themed Bounty Hunter Quads Blackout playlist might provide something different but isn’t likely to be a staple of Blackout in the long-term.

While the flooding will add a bit of excitement to the core Blackout mode, players increasingly clamor for the return of the faster-paced Alcatraz and Hot Pursuit.

Fortunately, Treyarch have a record of listening to their audience so we can expect the return of Alcatraz and Hot Pursuit soon.