Call of Duty developers Treyarch have released an update for Black Ops 4 on May 10, and it includes new content and changes for both Multiplayer and the Blackout battle royale mode.

It has been a busy week for Treyarch, who have now released two updates within a span of three days, both focusing on new content for the Xbox One and PC platforms.

Below, you can find everything you need to know about the May 10 update, including the full patch notes as provided by Treyarch.

Changes made to Prop Hunt + added on Xbox One and PC

After having been exclusively available for a week on the PlayStation 4 thanks to Sony’s exclusivity agreement with Activision, Prop Hunt has now been added on both Xbox One and PC.

In addition, Treyarch have also made some changes to mode, such as Hunters now spawning in with rotation loadouts that include SMGs and Assault Rifles.

These changes come in addition to the several ones that were already made in the May 7 update.

Prop Hunt is back, and everyone at @Treyarch has been practicing. pic.twitter.com/W5lUMraVRO

Ambush mode returning to Blackout, but with major changes

Teyarch have announced that the fan-favorite Ambush mode will be returning to Blackout, and it’s been updated for Operation Spectre Rising.

As part of the revamp, the mode will now give players access to all Sniper Rifles, except for the SDM, as well as Shotguns and the Bowie Knife.

Players will no longer have access to Concussion Grenades, Cluster Grenades, ATVs, and ARAV vehicles, so that they can “focus the action on pure gunplay this time around.” 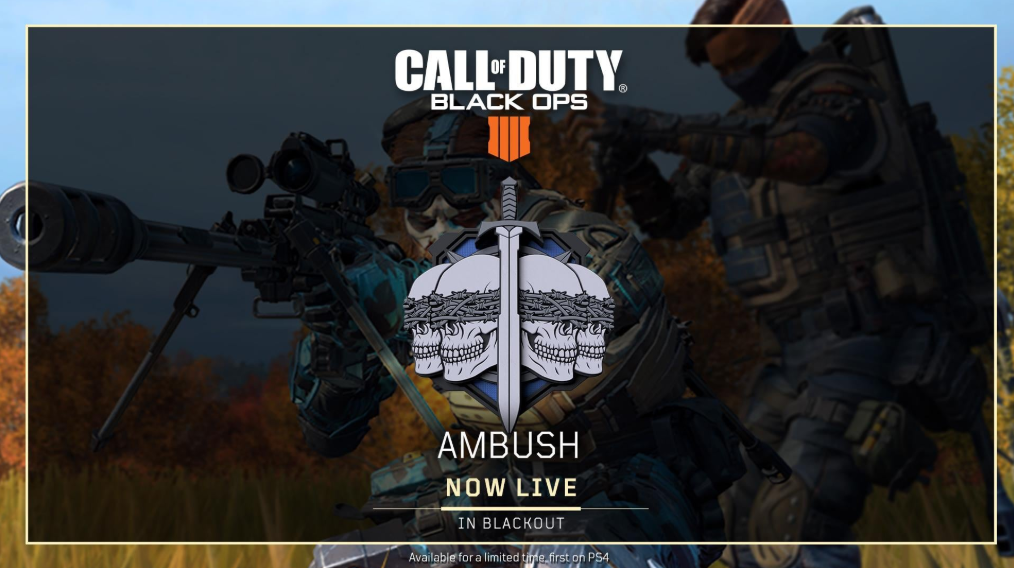 The popular Ambush mode will be returning soon to Blackout, but with major changes.

You can check out the full patch notes for the May 10 update below:

With today’s launch of Prop Hunt on Xbox One and PC, everyone’s favorite hide-and-seek mode is now live in the Featured category on all platforms. We’ve made some updates to Prop Hunt today, including new rotating loadouts for Hunters, improvements to Best Play at the end of the round, and additional stability fixes. The hunt is on!

Ambush is Coming Back to Blackout

It’s almost that time again, Blackout snipers. We’ve updated Ambush for Operation Spectre Rising, and it’s coming back to all platforms later this month with a new ruleset. Players will now have access to all Sniper Rifles (with the exception of the SDM) plus Shotguns and the Bowie Knife, and we’re removing Concussion Grenades, Cluster Grenades, ATVs, and ARAV vehicles to focus the action on pure gunplay this time around. Jump in, get some matches under your belt, and let us know what you think of the new revisions once it’s live.

We’ve also implemented a fix for a recent issue that could cause lag/hitching when a match with over 10 players was joined in progress, as well as improvements to the Alcatraz map in Blackout. Here’s the full list of what’s new:

Some improvements have already been made to Prop Hunt mode earlier this week as laid out below. These changes were made on Playstation 4 as part of the May 7th game update: