One of the rarest glitches in Apex Legends is also arguably the most shocking, and the reaction of ‘TimTheTatman’ after coming across it was exactly as you’d expect.

Seeing as its not even a month old yet, it comes as no surprise that Apex Legends is still full of bugs and glitches that affect regular gameplay.

While many of these glitches are relatively insignificant, there is one that is certainly game-breaking as it allows players who have been knocked down to still fire their weapon.

While players who do get knocked in Apex Legends can still do a variety of actions, such as crawl around, use their Knockdown Shield, and use the Ping system, firing their weapons or throwing explosives is most certainly not included in that list. 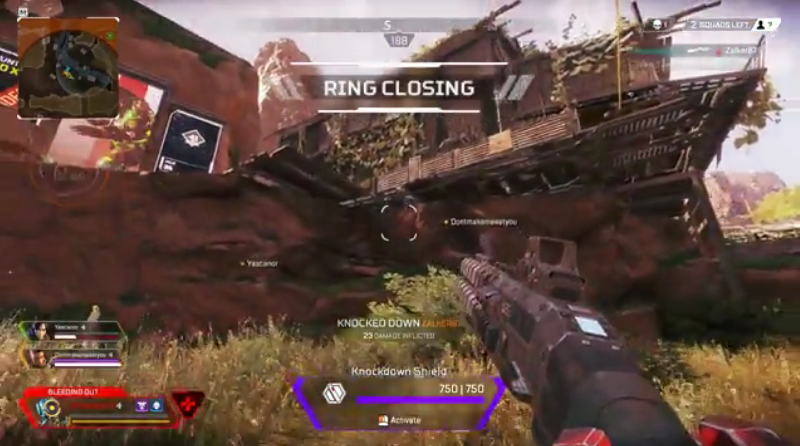 So it’s not hard to understand why TimTheTatman was so shocked and mindblown when experiencing the glitch for himself while playing with fellow content creators DrLupo and ItsFearItSelf.

During a gunfight with an enemy team, Tim was knocked and began expressing his frustration only to stop when he realized that he was able to continue using his weapon from the knocked down position.

What proceeded was total chaos as the streamer bellowed in excitement and surprise while he crawled around and fired shots at enemy players, all while his chat was blowing up in equal delirium.

Despite the very comical and entertaining nature of the clip above, there’s definitely some cause for concern as this particular glitch has now been in the game for nearly a month.

After seeing its effects in action, one can immediately understand how broken the glitch is and why the developers at Respawn Entertainment should place high priority on finding a fix for it before it further ruins the integrity of the game.

Have you come across this bug yet in Apex Legends? If so, were you the downed player or the one that got shot at by a downed player. Let us know by tweeting us @Dexerto and sharing any experiences and/or game clips you may have.