As Apex Legends starts to settle into a comfortable meta following the game’s release on February 4, pro players are beginning to decide which weapons are the best and which ones need some major work.

As is the case with every battle royale game, there are a diverse set of weapons to choose from in Apex Legends. From sniper rifles and pistols to shotguns and assault rifles, there is something in the game for just about every playstyle.

That being said, however, there are some weapons that stand head and shoulders above the rest and some that are just plain bad (we’re looking at you, Mozambique).

As such, NRG Esports’ Coby ‘dizzy’ Meadows has released his first official weapons tier list, and it features some surprising selections.

If you’ve seen any of dizzy’s gameplay, you’d know that he really fancies using the Wingman. Somewhat surprisingly, however, he’s listed it as the best weapon in the entire game. 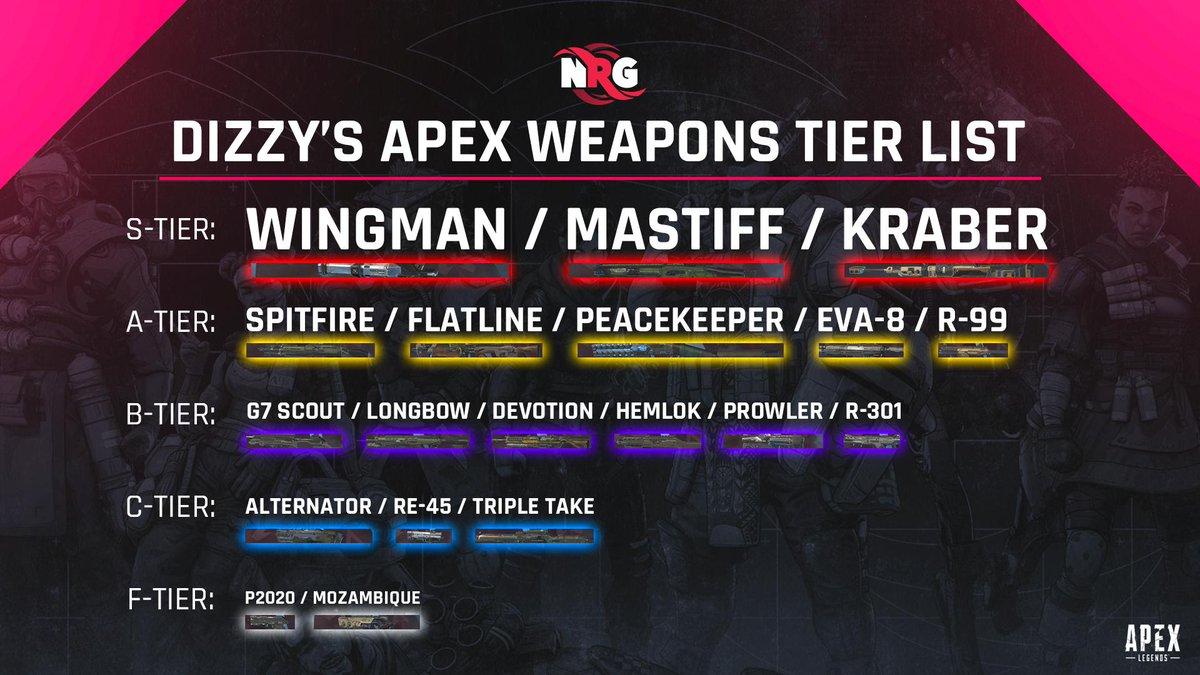 While many might agree that it’s incredibly good, the fact that he put it above the Mastiff and Kraber, the only two legendary weapons currently in the game, might come as a shock to some.

Elsewhere in his list, Dizzy puts the EVA-8 right behind the Peacekeeper, another somewhat surprising ranking given how strong many feel the Peacekeeper is at the moment.

Rounding out his A-Tier are the Spitfire, Flatline, and R-99, which are all widely accepted as some of the best weapons in the game.

To the surprise of just about no one, the Mozambique is one of just two weapons to fall into the dreaded F-Tier, joined by the P2020.

The Peacekeeper is seen by many as one of the best guns in the game.

Dizzy might have been the first pro player to release an official tier list, but surely many more will follow suit very soon as the Apex Legends meta continues to develop.

With Apex Legends yet to receive a major balance patch at this point in its short lifespan, there’s no telling what the meta will look like once that patch over the next few weeks.