Developers Respawn Entertainment have released a new update in Apex Legends, and we’re here to make sure you’re caught up with all of the changes.

On October 17, Respawn pushed out a small server patch in Apex Legends in order to address some of the game’s more pressing issues.

Those include the Charge Rifle, the new weapon introduced in Season 3: Meltdown which the player-base almost unanimously agrees is too powerful.

Additionally, the developers have also implemented changes and fixes to both Quips and the storm circle, particularly the first one that appears early in the match.

You can find all of the detailed information about this update below, including the official patch notes.

Heads up, Legends! We'll be pushing out a small server patch here shortly that include fixes and updates for:

Ever since the Charge Rifle debuted in Apex Legends following the launch of Season 3, the one consistent way it’s been described by players is that it’s way too overpowered.

It has become that type of weapon that everyone loves using to beam down enemies, but is extremely frustrating to come up against.

Well, players will be happy to hear that the Charge Rifle has indeed been nerfed, and the changes were not just a reduction to the damage.

The amount of ammo used per shot has been increased to 3 energy ammo, and the mag sizes have been adjusted from the base all the way to Level 3 Extended Mag:

There’s also been a change made to the fall-off damage, as the distance at which the weapon starts doing less damage has been decreased (details in the patch notes below.) 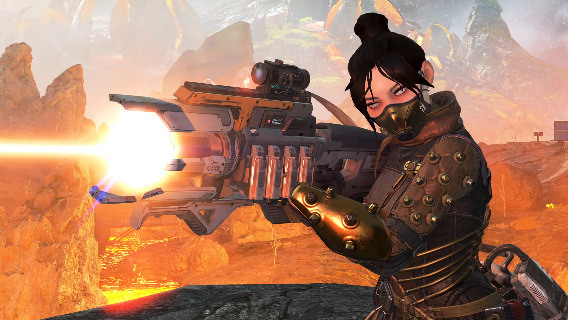 Almost everyone agreed that the Charge Rifle was way too powerful in Apex Legends Season 3.
[ad name=”article5″]

Changes to Quips and initial circle

This update also included two more things that it fixed – Quips and the circle. Using Quips in the Drop Ship has now been addressed, after players were complaining about how rowdy it got at the start of matches when everyone was spamming their Quip.

As for the circle, a fix has been implemented for the initial one, where now players will not get caught outside the circle when it starts.

Here are the full patch notes for this October 17 update, as provided by Respawn on Reddit.

A Server Patch rolled out this afternoon and is currently live on all platforms! You do not need to download an update for this one.

Notes below from Respawn.

Hey all, we got official clarification from Respawn about Fall-Off Damage, below is what they’ve told us:

Thanks for being patient with us while we get official information!

We have updated the bullet points with specifics that we’ve gathered in regards to Charge Rifle updates.