A Super Smash Bros artist has created screenshots of what Nintendo’s flagship fighting game would look like if it originally appeared on the NES.

Posting to the Smash Bros subreddit, user Orangefriedegg showed off what he had been working on so far and asked for suggestions about possible moves for Yoshi and DK as many of their moves came from titles released after the NES.

“I’m making this specifically as though it could have been made in late 1993,” the artist wrote. “What I’m looking for is more-so what hardware limitations or would have that may affect the game.”

Screenshots uploaded by Orangefriedegg show off a character select screen with series staples such as Mario, Luigi, Donkey Kong, Link, Bowser and Kirby.

Amusingly, while Bowser didn’t debut in Smash Bros on the Nintendo 64, the character has been around for longer which would have made him a prime candidate for an NES version. 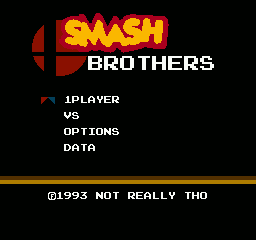 The title screen for “Smash Bros on NES” looks like something from 1993.
[ad name=”article3″]

Some other fighters not listed, but could certainly have been included are: Pit, ROB, Ganon, Duck Hunt and Peach/Toadstool to name a few.

Peach/Toadstool in particular could have moves ripped from Super Mario Bros 2 or as it’s called in Japan: Super Mario USA.

Stages shown off include Dreamland, a Mario castle level and a vague Zelda-themed map as indicated by the Triforce logo.

However, a description of the screenshot indicates that the stage is intended to be Hyrule Castle, but the icon is not yet finished. 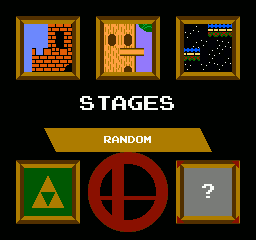 The stage list for “Smash Bros on NES” as designed by Orangefriedegg.
[ad name=”article5″]

Unfortunately, there’s no ETA on a gameplay demo, something Orangefriedegg implies is because Nintendo would try to take it offline.

Whatever the case, an NES version of the game is a very interesting concept and something that’s hard to imagine would ever have actually been considered back in 1993 not to mention the hardware limitations that would also hinder such a project.

It will be fun to see what comes of this fan project and if gameplay is ever revealed to the public.