The best items you should equip in Pokémon Sword and Shield

Pokémon Sword and Shield are finally here, and trainers from around the world are busy filling out their Pokédex with colourful critters from the Galar region. While the various NPC trainers and gym leaders pose little threat to your quest to become the very best, you’ll need to take a little extra care when stepping into Sword and Shield’s online battles.

Playing against actual players who know their type advantages, weaknesses, best moves, and overall synergies can make for some incredibly tense and often frustrating battles, particularly if you’re new to Pokémon’s multiplayer scene.

To help you prepare for these highly competitive battles, we’ve put together a list of the very best held items in Sword and Shield that will help give you an advantage over your foes. 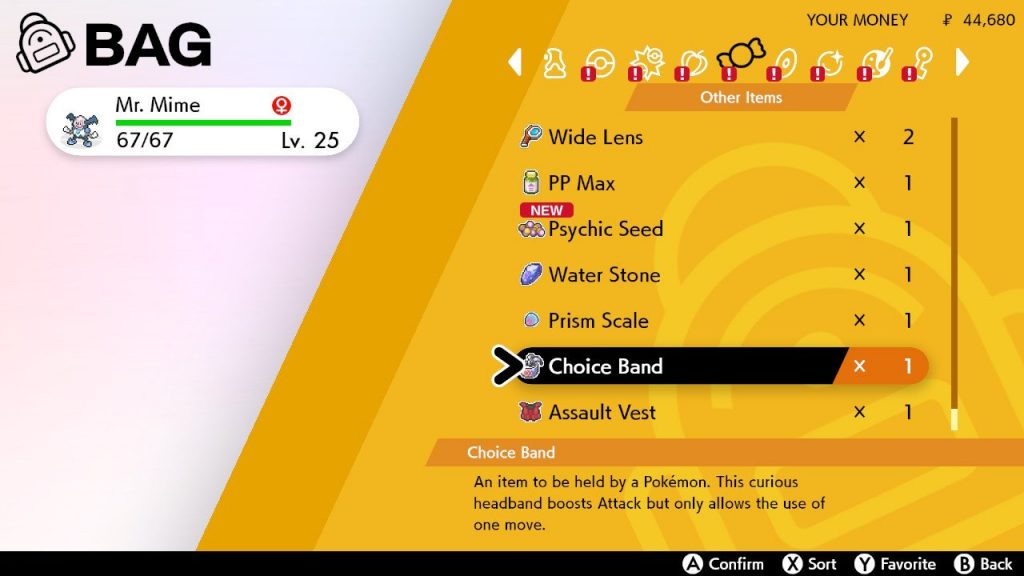 When the Choice Band item is being held by a Pokémon, the user’s Attack is increased by 50%, while the Choice Specs raise the user’s special attack by 50%.

Both these items drastically increase your Pokémon’s damage and can give them the heavy-hitting attacks they need to sweep multiple foes before being switched out. Of course, these items do come at a rather hefty cost – in fact, your Pokémon will only be able to use one move until they are withdrawn from battle.

However, we think the extra 50% damage increase is well worth the trade-off, especially when you’re going to be switching between your party Pokémon anyway. 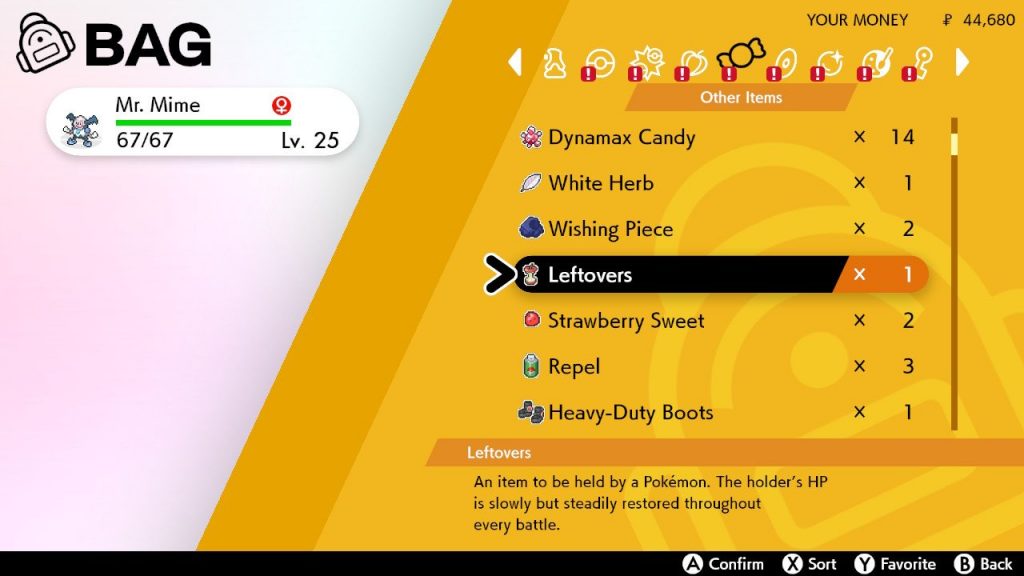 This humble recovery item has been a fan favourite ever since it first appeared in Pokémon Gold and Silver.

Leftovers slowly restore 1/16th of your Pokémon’s maximum HP at the end of every turn, giving them an added layer of survivability that will keep their health ticking over in particularly fearsome fights.

Competitive battles are often incredibly close, so having an item that naturally heals your companion throughout the fight is incredibly important. While having moves tailored around healing and draining your enemy’s health may be useful, it’s sometimes better to keep on the offence and let an item do the healing for you. 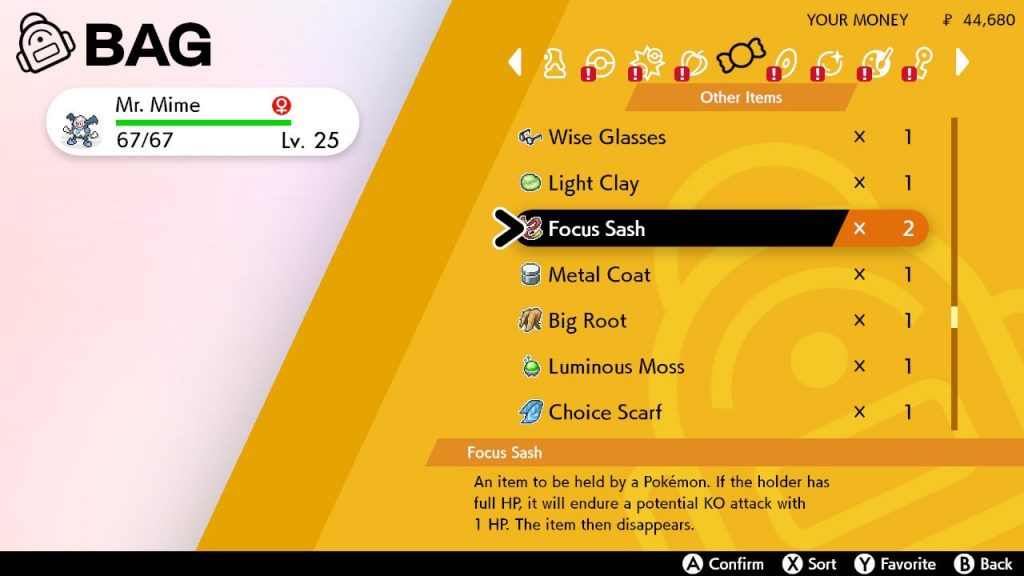 Location: Hammerlocke and Lake of Outrage

If you’re tired of watching your glass cannon Pokémon fall in battle before it can get a single attack off, then Focus Sash is an item you’ll want to prioritise. Focus Sash will stop your Pokemon from fainting when it is struck by an attack that would otherwise knock it out, leaving it with just one HP.

The only caveat here is that your Pokémon must be at full health for the Sash to work, so make sure you avoid taking any initial chip damage if you want to stave off any frustrating knockouts. Focus Sash may not be the flashiest item, but it does give frailer Pokémon a fighting chance. 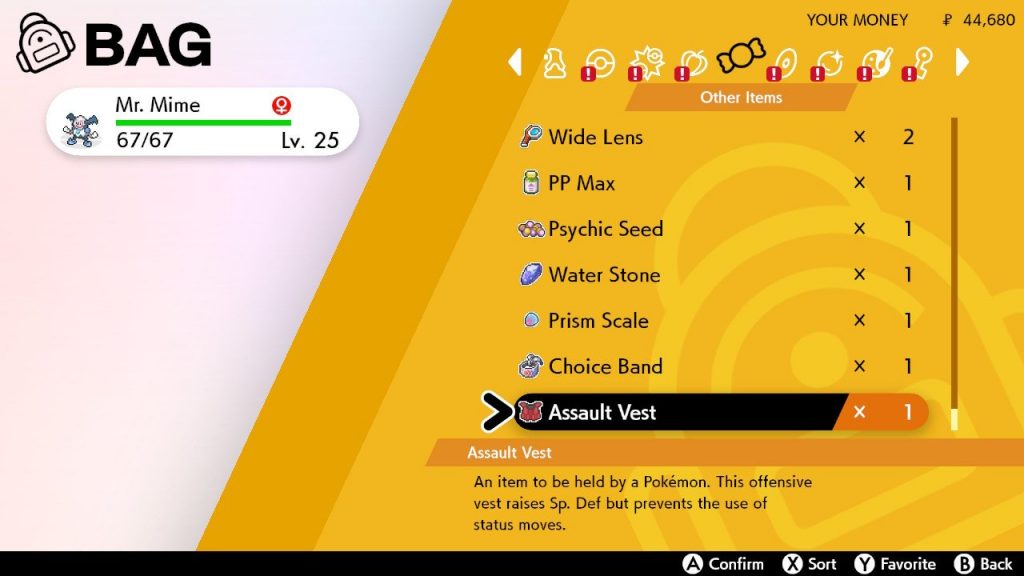 The Assault Vest is a staple defence item that is perfect for trainers looking to add even more bulkiness to high HP Pokémon. This defensive vest raises the Sp. Def by a whopping 50%, but prevents the use of status moves. The 50% increase in Sp. Def is highly advantageous for tanks, while more fragile monsters also greatly benefit from the added defence boost.

Consider equipping this item onto any Pokémon you want to act as your main damage sponge, and watch as your opponent struggles to cut through your sturdy defence. 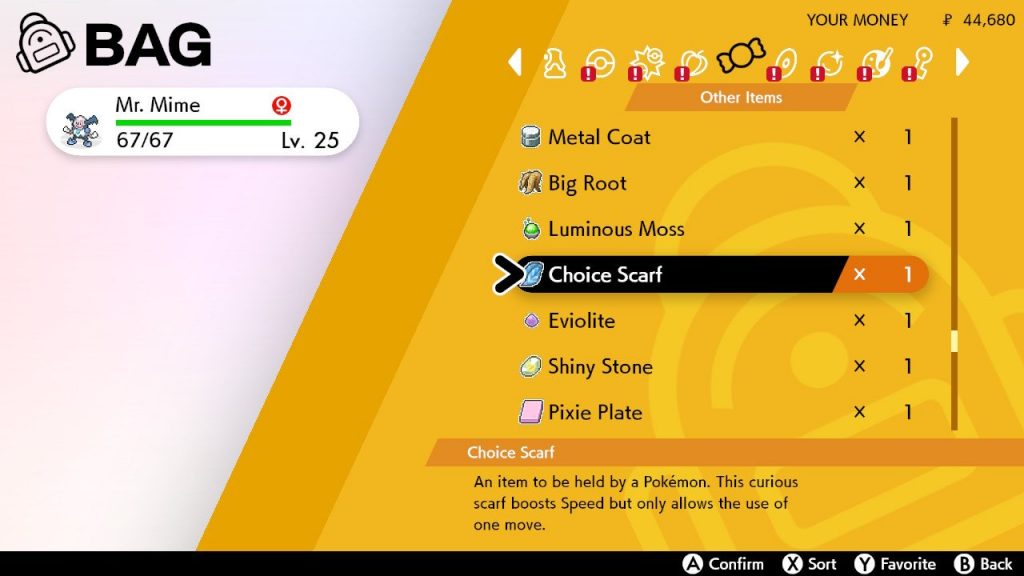 While the Choice Scarf isn’t as potent as its Band and Specs counterpart, it does help to drastically raise a Pokémon’s speed stat. When this item is held, the user’s Speed is increased by 50%, but the monster is limited to using one attack until it is withdrawn from battle.

Not only will this item increase your chances of being able to attack your opponent first, you’ll also be able to launch that knockout move before they can even react. Switch out moves like U-turn also allow your Pokémon to freely recall, giving you the opportunity to switch to another Choice-held monster. Doing this will reset the one attack limitation and help setup any other Choice combos. 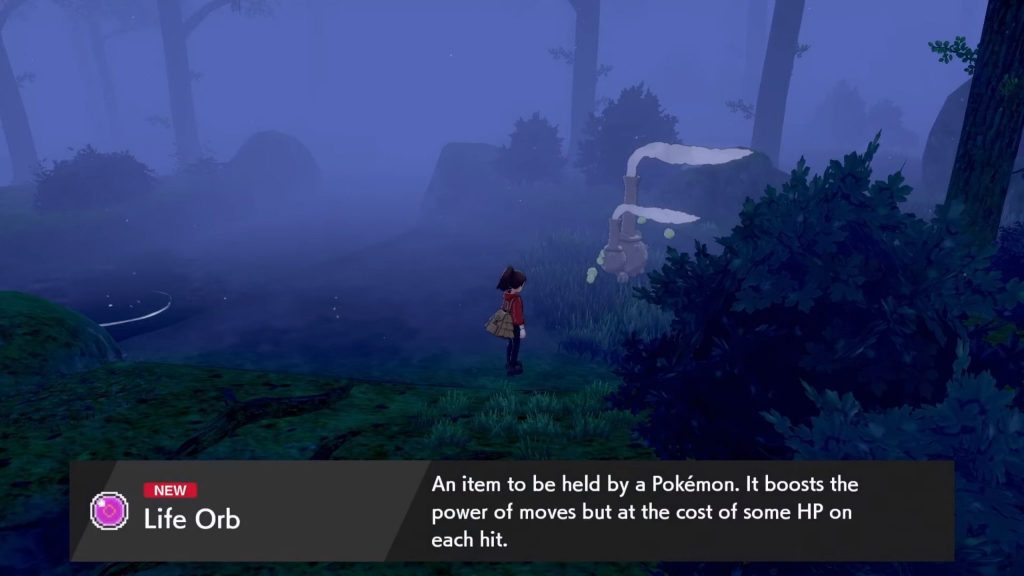 Increasing your Pokémon’s damage outside of levelling up is always going to be something the majority of trainers will want to do, so it makes sense that the Life Orb remains a popular pick.

This pink orb increases the holder’s damage by 30%, allowing you to unleash even more damage without being forced into using just one move.

However, the Life Orb isn’t without its downside as the user loses 10% of their maximum HP each turn. It’s a small price to pay for a decent damage boost and the general flexibility it provides, so if you don’t like the move limitations of the game’s Choice items, then be sure to give the Life Orb a spin. 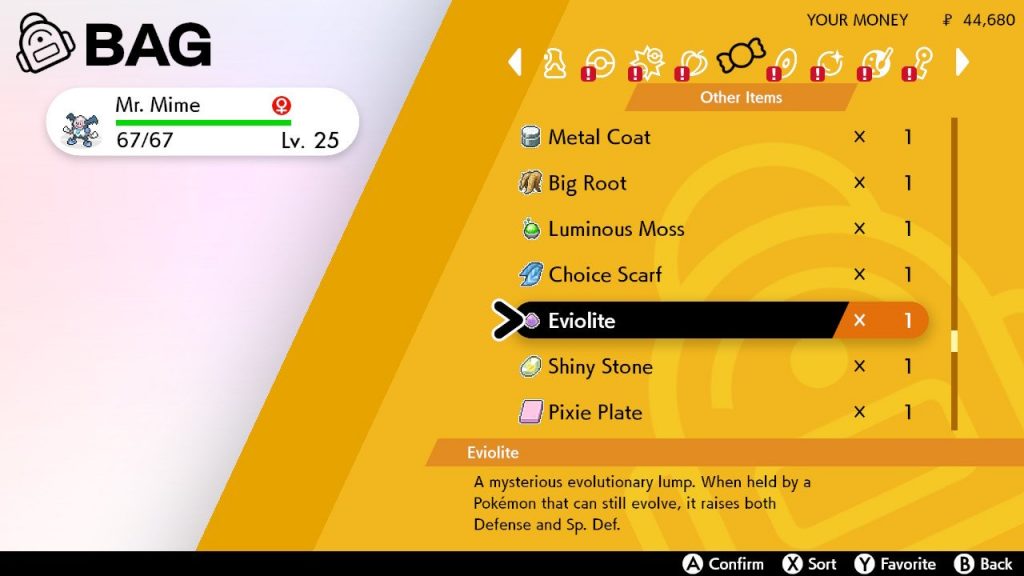 This mysterious evolutionary rock raises both Defense and Sp. Def by 50% when held by a Pokémon that can still evolve.

The non-evolution gimmick of this item makes it rather situational, but it does have a great deal of potential. If there happens to be a Pokémon that you don’t wish to evolve and still want to make it competitively viable in battle, then Eviolite will allow you to do just that.

We’ve seen pros sweep teams with unevolved Pokémon before and while it may not make up for your monster’s low damage stats, it will give your roster an extra surprise that could potentially sway the fight in your favour. 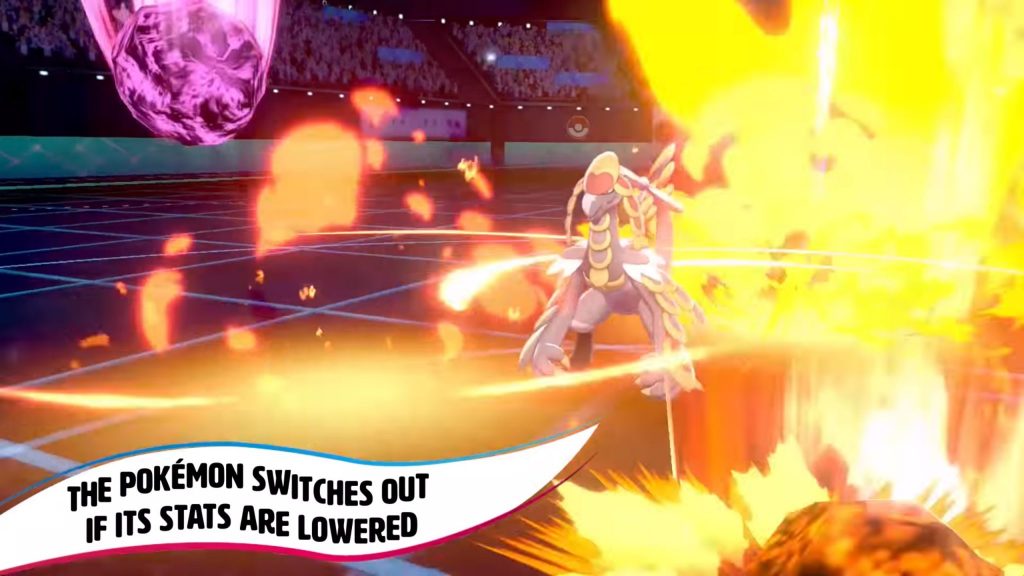 The Eject Button is another situational item that will certainly not be for everyone, but it does have an interesting mechanic that allows trainers to get a little creative with their strategies.

If a Pokémon is holding this item and its stats get lowered, it will instantly be switched out of battle. This item will stop you from wasting a turn switching out a new Pokémon and simply allow you to ready your next attack. We’ve seen how powerful Eject Button was in past competitive environments, so expect to see Eject Pack being used in online battles as well. 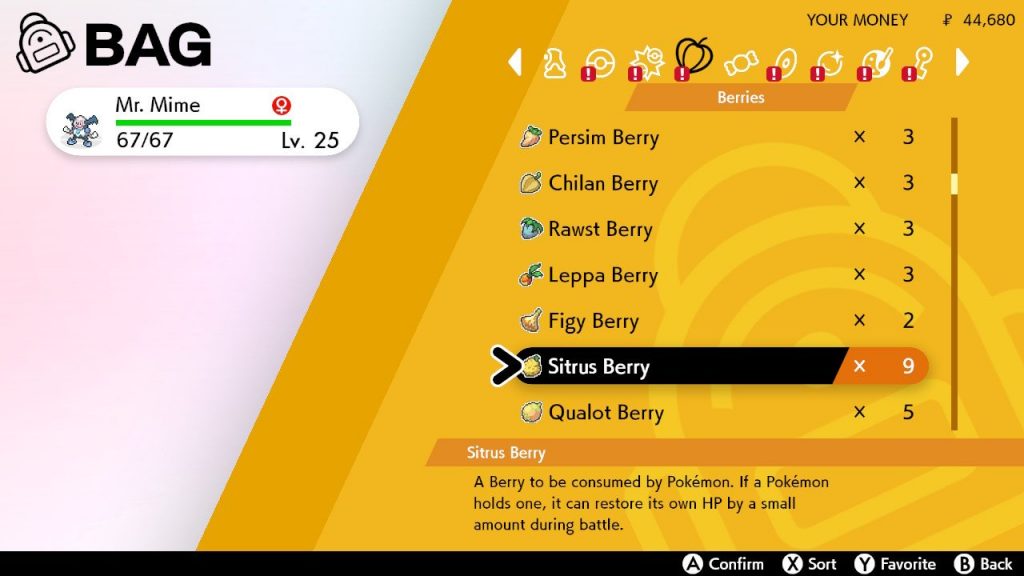 If you’re still struggling to find an item that compliments a specific Pokémon, or simply wish to have a little more recovery options, then you can’t go wrong with Game Freak’s assortment of delicious berries.

Berries offer all kinds of cures for various status effects and health recovery options, making it a highly versatile item that can get you out of many a tricky situation. For example, the Sitrus Berry recovers 25% of a monster’s maximum HP and is consumed when holder’s HP falls below 50%.

This humble berry can often allow your Pokémon to survive a lethal hit from an opponent, so consider equipping this item before going into any Double Battles.