Pokemon Go Trainer Battles has proven to be a great addition to the Pokemon Go game. With players still getting to grips with the new PvP mode, we share our Trainer Battle tips and discuss the rewards you can earn.

Perhaps the most important tip in Pokemon Go’s PvP mode is utilising type effectiveness. This is the best way to gain an advantage on your opponent. Anyone who has had any form of Pokemon battle before will know that some types are vulnerable to others, and vice-versa. For example, water is effective against fire.

It isn’t possible to know for certain which Pokemon you’ll be facing. However, if you can gain that effectiveness advantage it will go a long way to helping win the battle.

It isn’t possible to cover all type strength and weaknesses, as the chart below highlights. All you can do is put a team together of three varied Pokemon and make sure you don’t double up on the same type.

The red squares show super effectiveness whilst the gold ones highlight a weaker attack. 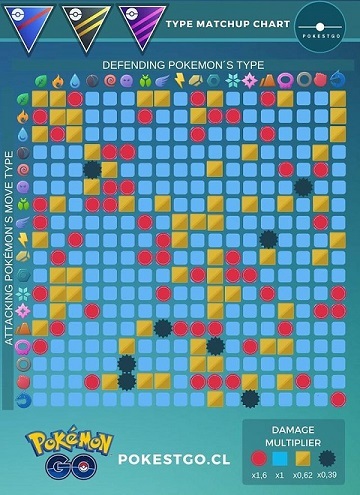 Pokemon effectiveness based on type… (Image from: Pokestgo)
360

Switching Pokemon in Trainer Battles is another integral part of the strategy. Pokemon can be switched during the heat of battle or when one faints.

This allows you to somewhat avoid having a type disadvantage. There may be an ulterior motive too such as saving a particular Pokemon.

It is important to note that Pokemon can only be switched once every 60 seconds. Consequently, be careful that you don’t get stuck against an enemy that is super effective against you.

Psychology also becomes a factor in Trainer Battles as you have to figure out if an opponent is expecting you to change.

Two protect shields are given to you in every PvP battle. Essentially, they protect from all the damage dealt by a particular move. The word essentially is used because it’s all but a very tiny amount of HP.

It is vital these protect shields are deployed against charge moves as opposed to fast moves.

Where there are potentially two charge moves you could be up against, using protect shields at the correct time is imperative. The safety first approach is to use the protect shields when receiving a charge attack.

However, there will be situations where you have a type advantage and may feel like it isn’t worth using the protect shield. This is where the second charge move comes into play.

For example, your fire-type Pokemon could be up against a grass-type. As a result, you might assume a grass-type charge move is incoming and therefore withhold your protect shield. This may not be the case though, and you could facing a move that is more effective.

Additionally, there are also other tactics that can be utilised when it comes to protect shields. If your current Pokemon is on low health, it probably isn’t worth wasting a protect shield.

Conversely, if your current Pokemon is integral to defeating your opponent, then using the protect shields a little more leniently might be advisable. 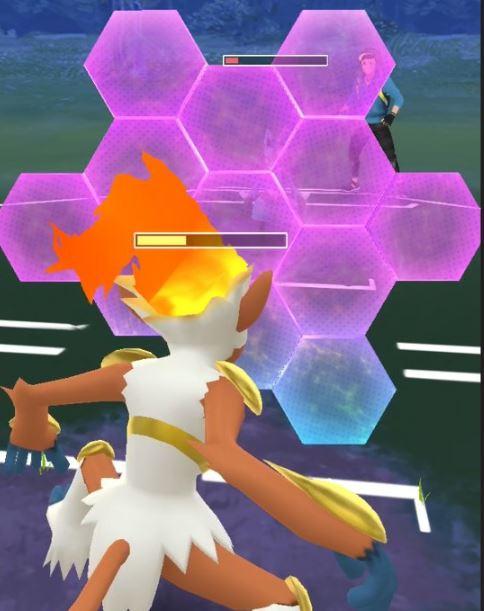 The protect shield in action in Pokemon Go Trainer Battles…
360

Minus the prestige of competing, the main incentive of Trainer Battles are the rewards it generates. The following are potential rewards for participating (win or lose) in a PvP battle:

Rare candy and Sinnoh stones are only potential rewards in a maximum of four battles per day. More specifically, that’s one NPC (team leader) battle and three battles against other Pokemon Go players.

The likelihood of receiving each reward isn’t officially documented. However, it is estimated that there is a 1 in 8 chance of receiving a Sinnoh stone. Rare candies were only introduced recently so their rate has yet to be determined.