Another gen 4 Pokemon is available in Pokemon Go! Palkia, the legendary, water and dragon type Pokemon, will be available in raid battles throughout February!

The gradual rollout of generation 4 Pokemon in Pokemon Go continues.

Pokemon trainers thought their next shot at a gen 4 Pokemon would Mammoswine in the February Community Day. However, with that event coming on February 16, the Palkia raid battles present an earlier opportunity.

Palkia will join raid battle worldwide on January 29, 1pm PST. It will be available until February 28, 1pm PST. That’s 9pm GMT and 6am JST.

Tier 5 legendary Pokemon in raid battles are never easy to catch. Palkia will be no exception as it will have a CP of 50,019.

As a result it is important to know Palkia’s counters. Generally speaking, Palkia is weak against dragon and fairy-type moves. Palkia, as a dragon and water-type itself, is strong against fire, steel and water-types of Pokemon.

Raiding it could prove frustrating. Palkia’s Draco Meteor will often make you faint in one hit. Elsewhere, its hydro pump isn’t particularly effective against natural counters. Finally, fire blast doesn’t have the damage its other two moves does. 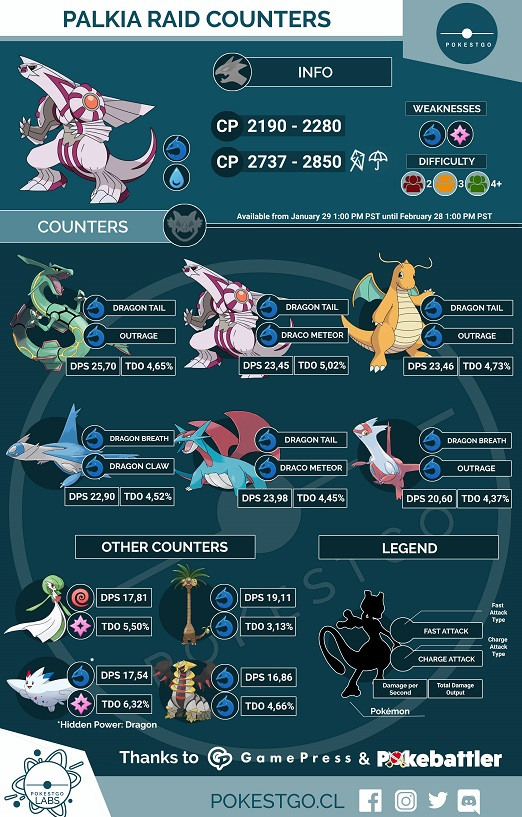 The best Palkia counters in Pokemon Go. (Image from: pokestgo)

The best counter for Palkia is the gen 3 Pokemon, Rayquza. The flying and dragon-type Pokemon provides the best route to defeating Palkia. Its dragon type moves outrage and dragon tail are effective against fellow dragon-types. The result of this is 1.4x damage.

Other counters unsurprisingly include Dragonite, who shares the same moveset as Rayquaza. Furthermore, Palkia itself is a good counter. Generally, dragon-types are the way to go in this raid battle.

As raid battles are all about damage per second, the fact dragon-types are weak to their same type isn’t overly important. In gym battles or PvP battling this would be a more prevalent factor.

For those who didn’t play the 4th generation of Pokemon games on Nintendo’s handheld consoles, Palkia is the exclusive legendary Pokemon from Pokemon Pearl.

Dialga, the exclusive legend from Pokemon Diamond, has yet to appear in Pokemon Go.

Given how Palkia is entering Pokemon Go, this suggests Dialga will do so in a similar way in an event over the coming months.