The Pokemon Go community were becoming increasingly impatient for the release of more gen 4 Pokemon. Niantic have announced that several new generation 4 Pokemon are available now!

Previous to the announcement, 62 of the 107 available Pokemon from generation 4 were obtainable in Pokemon Go.

This latest batch of gen 4 Pokemon brings another 15 (or more). Therefore, we are now up to 77 in total. Mamoswine, who will be presumably the 78th to be released, will be available in the upcoming Pokemon Go February Community Day.

Which Gen 4 Pokemon Have Been Added?

The 15 new Pokemon includes 8 that can be found in the wild, 6 that can be evolved using Sinnoh stones and a further 1 (confirmed) that can be hatched in eggs.

Shieldon and Cranidos are fossil Pokemon. In Pokemon Diamond and Pearl they were resurrected using the Armor and Skull fossils respectively. Their evolved forms are Bastiodon and Rampardos.

Combee, the bee Pokemon, is usually seen in the wild in a male to female ratio of 7 to 1. This is relevant because only the female version can evolve into Vespiquen. Currently, all Combee in Pokemon Go are female and can therefore all evolve.

Finally, the normal cat Pokemon Glameow can also be found. Consequently its evolved form Purugly can also be obtained. 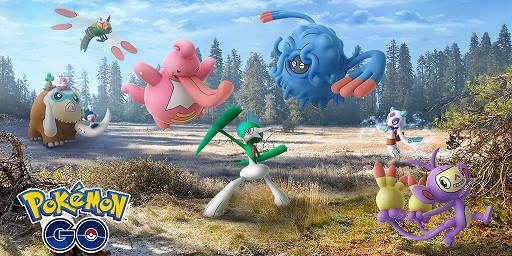 Sinnoh stones are most commonly found in rewards for participating in PvP battles.

Palkia, the legendary, water and dragon type Pokemon is another recent addition. It is available as a raid boss now!

It has been confirmed Bonsly is available in 7km eggs. If you have found any other new gen 4 Pokemon from eggs, let us know on our Pokemon Twitter page.

Changes Made to Raid Bosses and Trainer Battles

In addition to the new wave of gen 4 Pokemon, there have been major changes made to raids and trainer battles.

Raid bosses have had their HP adjusted to balance the game more appropriately. Moreover, moves within trainer battles have been altered and added.