The special events keep coming in Pokemon Go! Niantic are celebrating the Lunar New Year with a special Pokemon Go event. The 9 day long mini-event will include various bonuses, more frequently seen Pokemon and the chance of a shiny!

The Chinese New Year welcomes the year of the pig. Appropriately, Pokemon Go will have a special event focused around the pig Pokemon, Spoink!

As with other Pokemon Go special events, bonuses, more likely Pokemon spawns and a chance of a shiny variant of the headlining Pokemon are the main features.

The specific bonuses for the Pokemon Go Lunar New Year special event are as follows:

Take advantage of the increased likelihood of receiving a lucky Pokemon via trade. Remember, lucky Pokemon can cost up to 50% less to power-up. This means a big saving on Stardust!

The Lunar New Year event has already started! It started 30 minutes after the event was announced.

The duration of the event is 9 days and will finish on February 13, 1pm PST.

There are 12 Pokemon that will appear more frequently in the wild during the Lunar New Year event. They are Rattata, Ekans, Mankey, Ponyta, Electabuzz, Dratini, Mareep, Miltank, Torchic, Poochyena, Spoink, and Buneary. Their significance to this event is each of them represent the Chinese Zodiac.

Furthermore, with it being the year of the pig, shiny versions of the Pokemon spoink will appear in the wild! 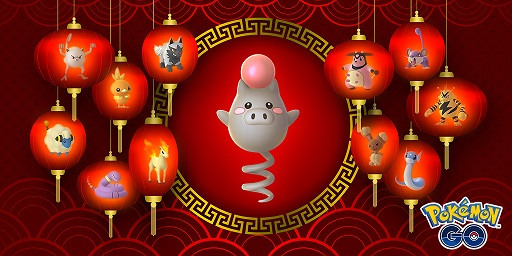 The 12 featured Pokemon for the Lunar New Year event…

Niantic have been busy in 2019 so far. On January 31, they introduced several more gen 4 Pokemon.

Furthermore, big changes were made to trainer battles and raid bosses in order to re-balance the game.