Pokémon Sword & Shield releases on November 15 after months of anticipation, and one creative cosplayer took her talent and skills to re-create a notorious meme about the game’s female protagonist.

Pokémon is not only one of the biggest franchises for Nintendo, but it was also announced that it was the highest grossing media franchise of all time in August 2019, as it’s generated over 90 billion dollars in sales in its lifetime.

The lovable RPG returns on November 15 with its latest iterations Sword & Shield, and a skilled cosplayer recreated the game’s female protagonist to perfect accuracy, while also bringing a hilarious meme to life.

Ever since being announced, Pokemon’s UK fans have had fun with the game being influenced by their country.
[ad name=”article2″]

A Pokémon meme brought to life

The latest Pokémon title takes place in the Galar region, and is believed to be heavily influenced by places in the UK, so naturally fans from the country went into a frenzy to create memes based on it.

One of those jokes that went viral was the suggestion that the female protagonist in the game was actually Scottish, and was a heavy drinker to fit the stereotype.

Australian cosplayer ‘allyjacqui‘ saw the humor in it, and dressed up as the character with a perfect recreation, but also decided to use her incredible costume to bring the meme to life.

She faithfully created the green beret, gray-knit sweater, and even sported the same bob haircut as the character, but posed while downing alcohol and toasting the beverage.

As if the perfect costume and hilarious pose wasn’t enough, the talented cosplayer decided to kick it up a notch, and recorded a video for her Instagram where she recorded herself in the outfit reaching for booze.

She is using her smartphone in the clip, when she suddenly turns to the beverage in her hand, then flicks the bottle cap off and guzzles the alcohol down as the camera pans in.

According to KnowYourMeme, the joke first popped up after the game’s protagonist choices were announced, and UK Pokémon players’ fan art quickly turned to portraying the female character as being from Scotland and drinking too much

An example of this was posted by Twitter user ‘brickonator’ who joked “Pokemon fanart on the tl right now truly shows the duality of mandkind” as they pointed out the serious art being made, versus the meme portrayal of the character. 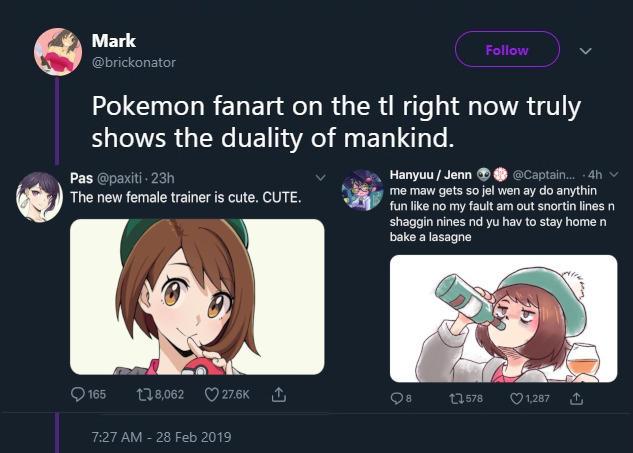 An example of the meme which shows the latest female Pokémon protagonist as a heavy drinker.
[ad name=”article5″]

Pokemon Sword & Shield will no doubt be another smash hit for Nintendo, as fans will be able to take the game portable and dock from home on the Switch.

It releases on November 15, and will have a special edition Switch Lite to celebrate the occasion.