Félix ‘xQc’ Lengyel has received a formal warning after being suspended from Overwatch ahead of the World Cup.

xQc is set to represent Canada at the Los Angeles Qualifier for the Overwatch World Cup on September 7-9, but his eligibility came into question after receiving a 15-day game suspension for “abusive chat”.

According to a report by Unikrn, xQc has been given a formal warning by Blizzard, but will not be suspended from the World Cup at this time, on the basis that his in-game suspension finishes on August 26, prior to the Los Angeles Qualifier.

xQc has already offered a public apology for the behaviour that resulted in his suspension, also stating that his intention was not to be hurtful with his in-game chat. 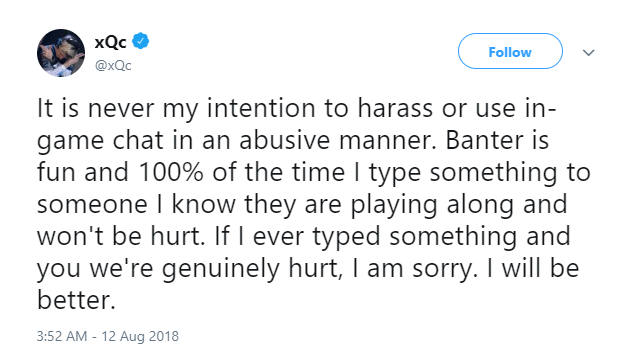 Under the World Cup rules, Blizzard could have prevented xQc from competing following his in-game ban, as the rules state that all participants’ accounts “must be in good standing” for the duration of the event, which officially began on May 17. It is believed this was the reason that Daniel ‘Dafran’ Francesca was removed as a candidate for the Denmark Community Lead position during the national committee voting stage.

It appears, however, that Blizzard has chosen to be lenient in this case, a decision that might come as a surprise considering xQc’s history. During his time in the Overwatch League, xQc was disciplined by the league on multiple occasions for his behaviour, ultimately leading him to part ways with the Dallas Fuel in Stage 2.

xQc’s future with the Overwatch League remains in question, as he has previously suggested that teams have already expressed interest in signing him for season two. As one of the game’s most popular streamers and one of the most skilled main tanks in the world, xQc is certainly an attractive prospect in many ways, although this latest suspension is a reminder of the risks that come with a player prone to controversy.