Overwatch League team Vancouver Titans appear to have confirmed that Overwatch 2 will be released in 2020.

While the post doesn’t give a specific date, if accurate it would at least give players a narrower timeframe than they currently have for the launch. So far, Blizzard haven’t given any official word on when Overwatch 2 can be expected to release, with Jeff Kaplan even stating in November 2019 that the developers had “no idea”.

Blizzard haven’t yet given any details about the release of Overwatch 2.

Though many fans might have anticipated a 2020 release anyway after the reveal at 2019’s BlizzCon, it’s by no means guaranteed – Overwatch itself was first unveiled at BlizzCon in 2014, and didn’t officially release until May 2016.

The tweet didn’t only mention a 2020 release, but also stated that the Titans are “excited for all the new game modes.” So far, only one new multiplayer game mode, Push, has been officially confirmed for the sequel, but the Titans tweet implies there could be multiple others also in the works. This would line up with Blizzard job listings which also appear to suggest as much. 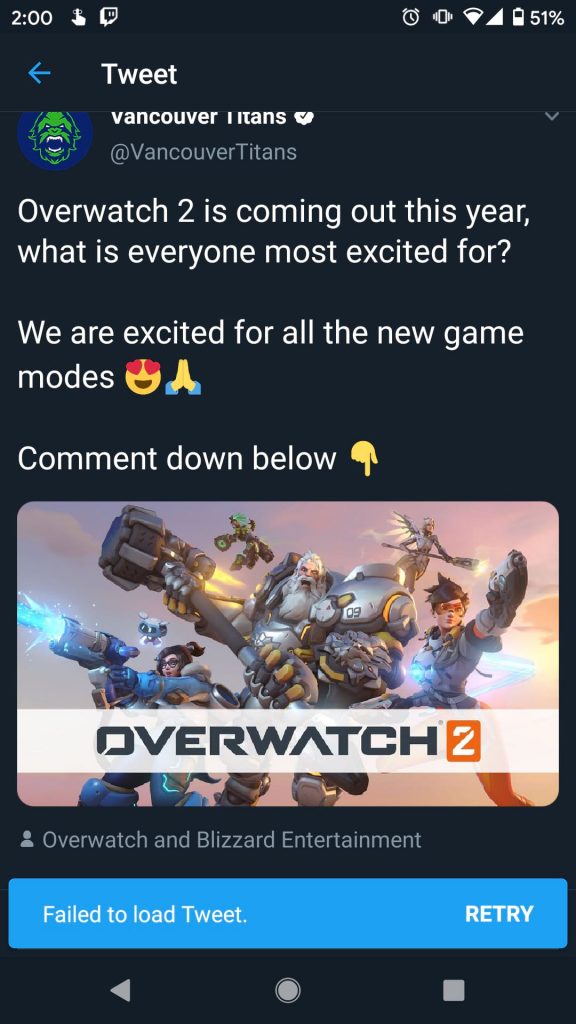 This isn’t the first time a third party has apparently leaked a 2020 release for Overwatch 2. The PlayStation Brazil Twitter account also stated that “2020 will be the year Overwatch 2 comes to PS4” in a tweet that has since been deleted.

While it’s possible that both these accounts could have simply made an assumption that the game will be out in 2020, the fact that two separate sources who could well have knowledge about the release make the same statement lends credence to the theory that Overwatch 2 will, in fact, be released this year.

While much of the content of Overwatch 2 remains unknown, the game is expected to focus largely on PvE and story-based content, something that the original title almost entirely lacks.

While it will also introduce multiple new heroes and at least one new game mode for multiplayer PvP, these features are expected to be available to all Overwatch players whether or not they purchase the sequel.