Overwatch fans were able to go hands-on with a brand new story mission on the BlizzCon show floor and we’ve broken down all the biggest takeaways from the new gameplay.

Blizzard officially lifted the lid on Overwatch 2 during the BlizzCon 2019 opening ceremony, sharing a brand new cinematic as well as an explosive gameplay trailer.

From new competitive maps, an entirely new mode, as well as new heroes, there was a lot to digest. One of the biggest announcements however, was the introduction of a much more fleshed out PvE experience. With a full mission playable for attendees, here are our biggest takeaways after battling through Rio De Janeiro.

Throughout the demonstration, the squad of Reinhardt, Mei, Lucio, and Tracer fight through huge waves of enemies and are met with unique Supply Crates after each big encounter. Once opened, these Supply Crates provide three unique items to the team.

“Throwing a corrosive grenade,” Reinhardt stated before launching one of the equipable items. Starting the mission with a Rare variant, a Supply Crate towards the end of the mission provided a Legendary-tier option which improved the effects.

Corrosive Grenades deal damage upon impact and have a lingering effect that makes targets more susceptible to incoming fire. The Rare variant imposed a 40% debuff on enemies, whereas the Legendary variant was set to 60%, both with a 90 second cooldown after use.

While few abilities were shown, players were treated to first looks at a cylindrical shield ability, as well as a placeable turret like Torbjörn’s. The rarity of each ability remains unclear, however with Legendary-tier loot featured throughout the mission, expect powerful combinations. 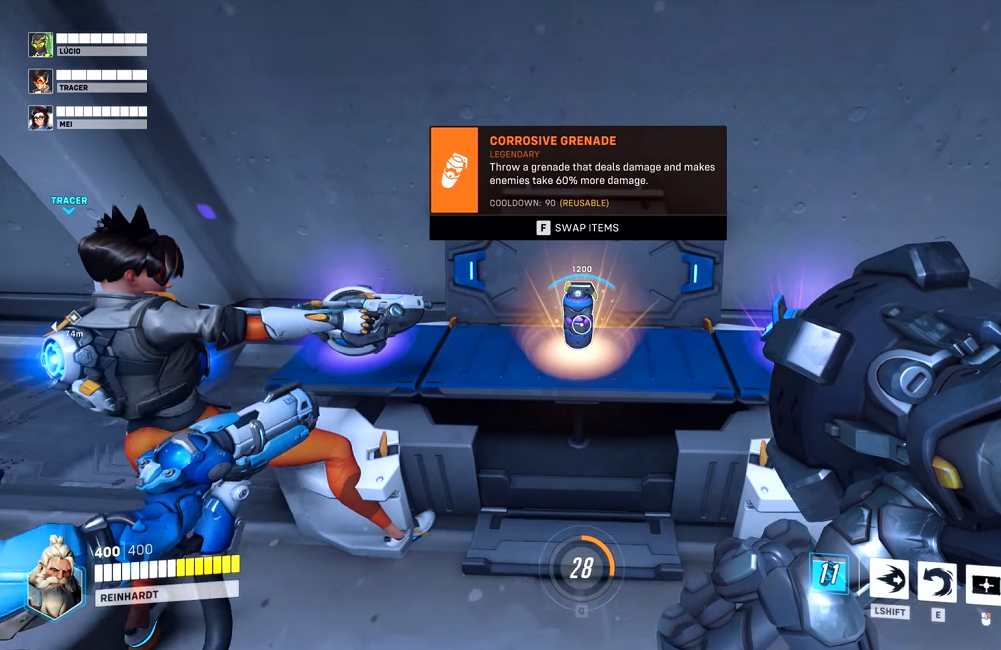 The gameplay snippet also revealed a few new enemy types that helped bolster the Null Sector ranks in Brazil. From flying enemies to highly-detailed mini-bosses, it’s safe to say that enemy design has seen a major step up in Overwatch 2.

“Watch out for the Obliterator on the balcony,” Lucio yelled as a devastating new enemy dropped into combat. With two layers of health – a yellow bar followed by a red bar – this slow-moving enemy is quite the tank.

Equipped with dual cannons that can be independently destroyed, the means in which players deal with powerful enemies is now more intricate than ever before. Rather than simply shooting an enemy until they die, teams can focus specific targets to impede the opposition.

Skirmishers and Orbiters were called out as various aerial enemy types, and the final boss was labeled the Behemoth. Introduced with a unique cutscene, this enemy absorbed more damage than any prior combatant and is sure to provide a challenge at the highest difficulty. 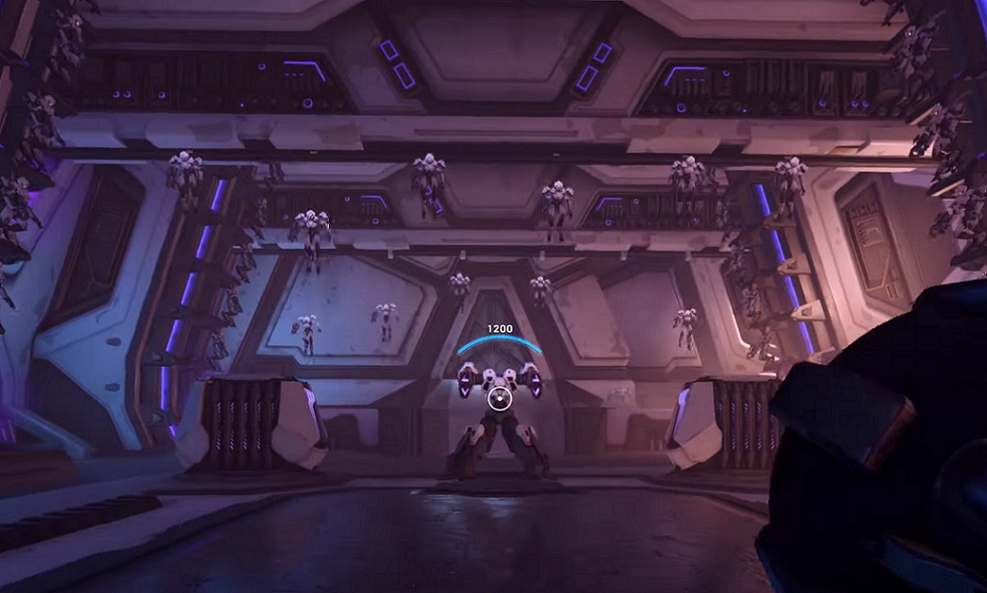 A look at the beefy Obliterator enemy type, flanked by additional enemies aboard the Null Sector ship.

The Deathmatch map Petra featured one of the first instances of destructible environments in Overwatch, yet the sequel seems eager to ramp up the explosiveness on the PvE side of things.

With Null Sector reinforcements crashing through buildings, the environment is capable of changing mid-fight. “That’s my favorite record shop. Damn it they’re wrecking the entire city,” Lucio explained early into the mission.

There’s no telling just how destructible other story missions will be when Overwatch 2 is released but if the Rio mission was anything to go off, it seems to be a big focus moving forward to ramp up the stakes.

Additionally, with current PvP maps being re-worked for replayable Hero Missions in the sequel, it would be interesting to see if destructible elements are added around fan-favorite locales.

The Story is Expanding.

Last but not least, the narrative was pushed to the forefront of the new mission with heroes consistently interacting and discussing the war at hand.

While various missions are sure to see unique lineups, this particular segment focused on a battle through Brazil with hometown hero Lucio fighting alongside Overwatch companions Reinhardt, Mei, and Tracer. Having recently reformed, the Overwatch crew is out in force to defend the area from a Null Sector assault.

With Overwatch now reformed, we could see a number of new heroes join the fight.

Progressing through the streets, the squad gets an assist from former announcer and upcoming hero Echo. “Echo are you there? We’re gonna need a ride,” Tracer expressed before jumping aboard an aircraft and being dropped off inside an enormous Null Sector ship.

Fighting through wave after wave of powerful foes, the squad finally reaches the Reactor Core of the ship and swiftly takes it out. Setting off a chain of explosions the team is forced to evacuate before the entire ship collapses. Luckily Echo is ready to save the day and rescue the heroes at the end of the mission.

Blizzard have yet to reveal a release date for Overwatch 2 as Blizzard Vice President, Jeff Kaplan, explained that the developers “have no idea,” when the content might be available.

Recently, former Overwatch League pro and popular streamer  Brandon ‘Seagull’ Larned expressed that this BlizzCon was “bittersweet” as while new PvE content is all the rage, the current game is still “rough to play.