Ultimate Legends has returned to Madden Ultimate Team, bringing with it an update to seven different Legends cards, and a brand new addition to Madden 19.

With Madden 19 entering the final months of its yearly life cycle, players are no doubt happy to see the return of the Ultimate Legends promo to get some much-needed upgrades.

Sean Taylor and Calvin Johnson are the natural draws for most users, with the likes of Bill Romanowski acting as a nice surprise given most assumed the introduction of new Legends had long since passed. 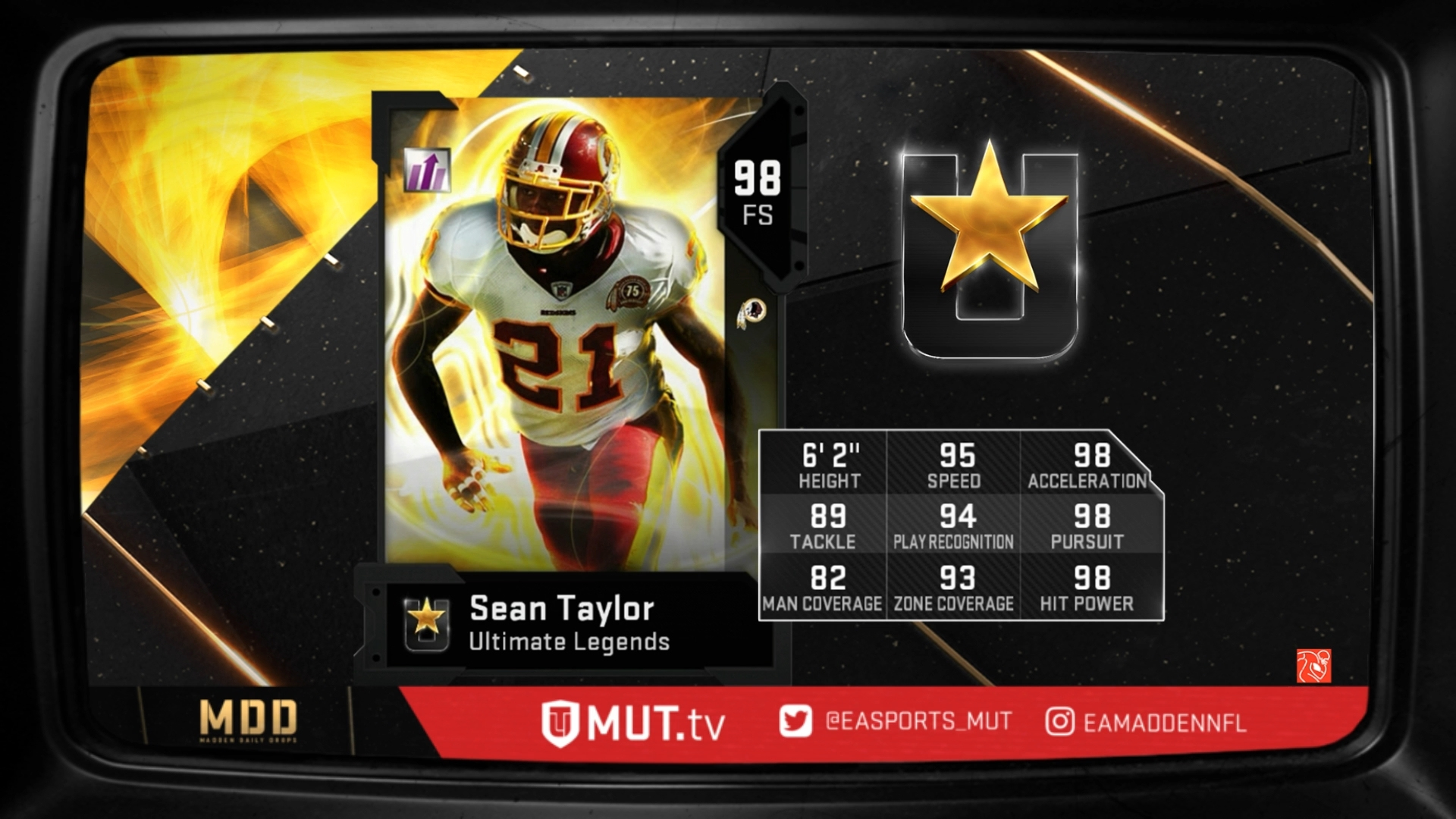 Sean Taylor is one of the main draws of the first Ultimate Legends drop.

Both Taylor and Johnson certainly look the part of “Ultimate Legends” with the former dropping as the fastest and hardest hitting free safety in the game, while the former Lions wide receiver boasts impressive size (6-foot-5) with even better receiving capabilities. 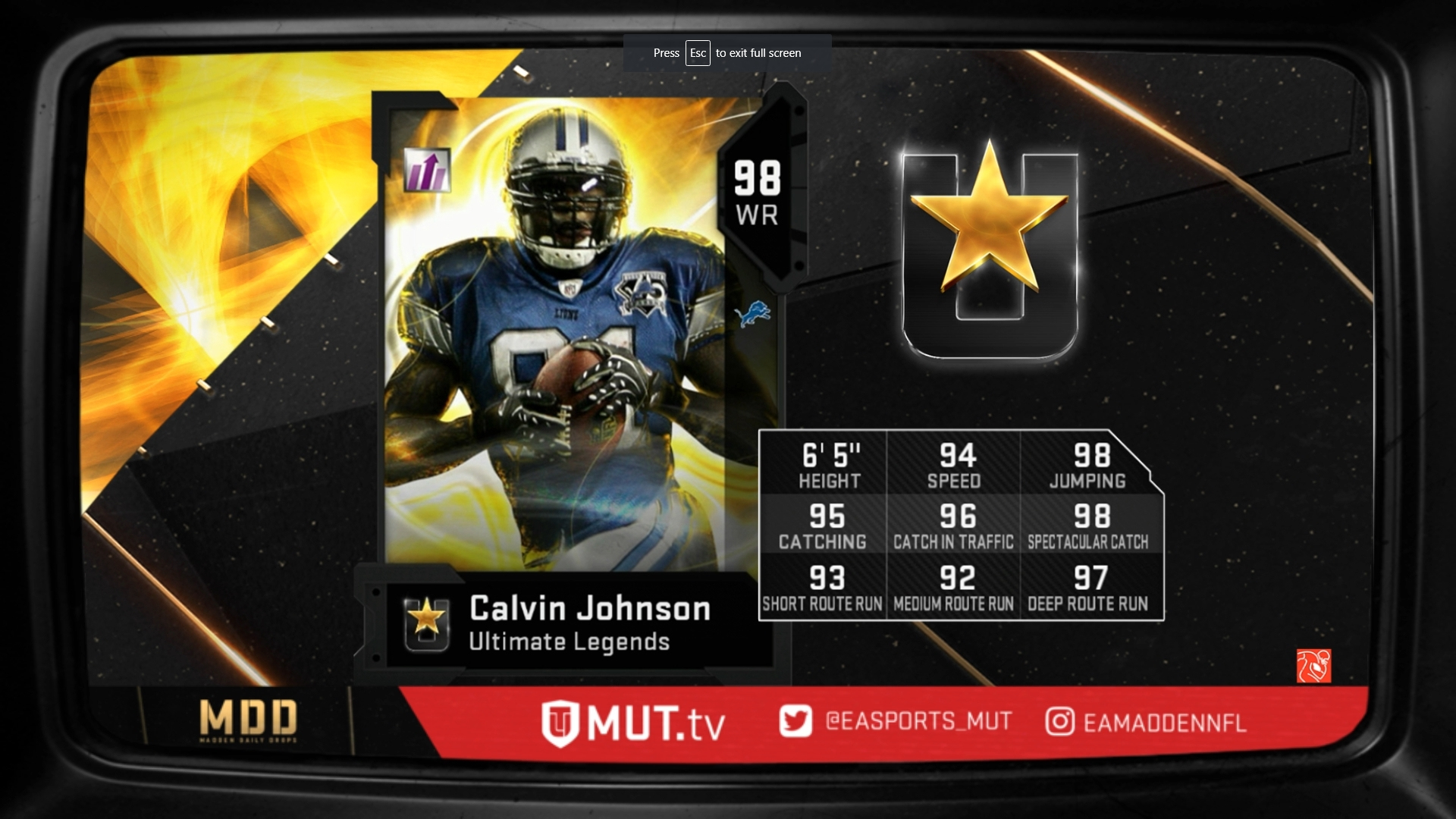 The legend known as Megatron is no doubt one of the better receivers in Madden Ultimate Team.

But the release of these star players is slightly clouded by the fact Johnson’s previous best item, the 94 overall MUT Monster, is unable to be used in the Power-Up format.

That’s a brutal outcome for players who had invested coins in the previous iterations, only to seem the outclassed by their “Ultimate” versions, and incapable of adding them to the newest card. 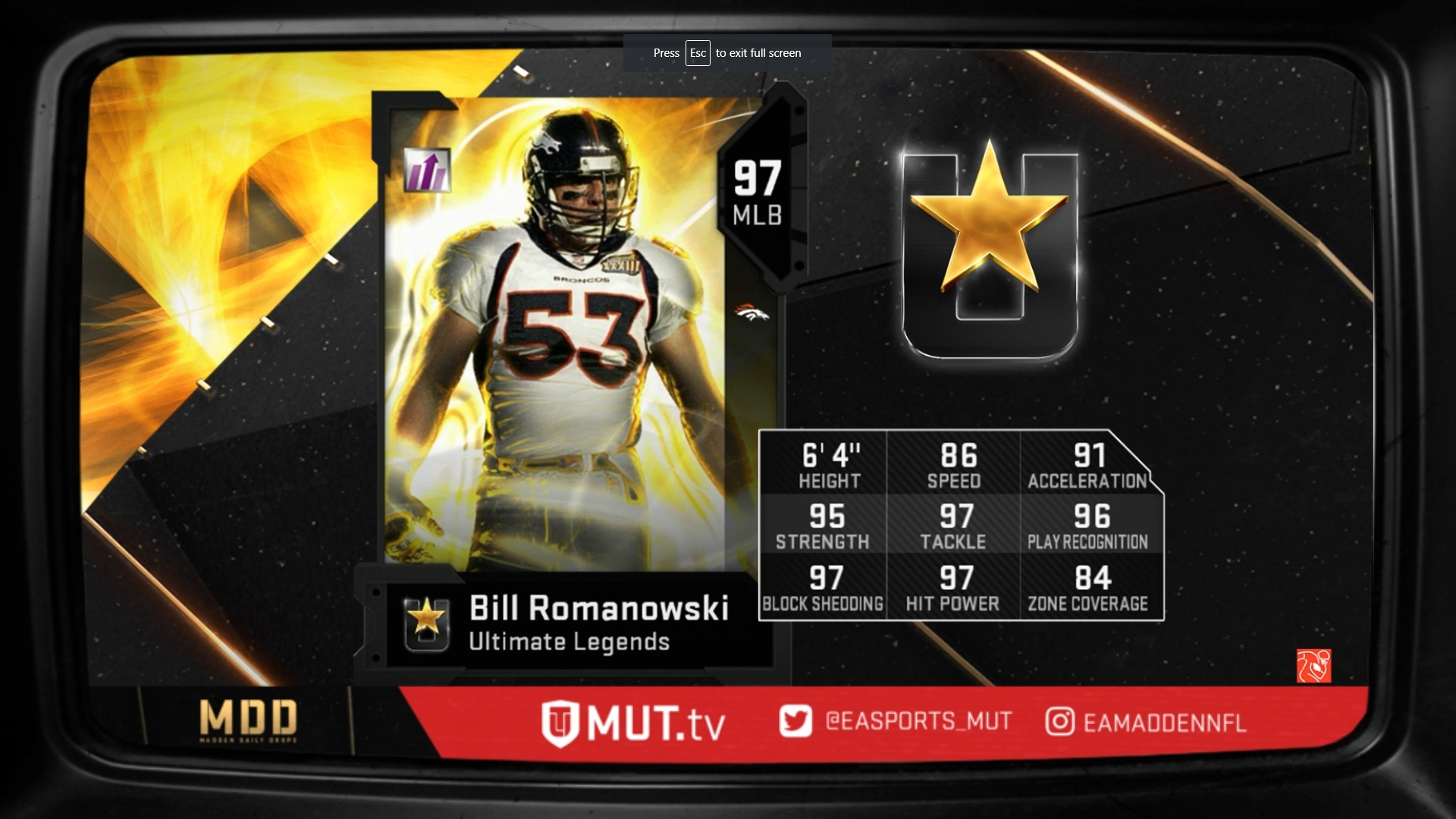 Romanowski is somewhat of a mixed bag.

For what it’s worth, the newest Legend to hit Madden Ultimate Team isn’t exactly glamorous, as Romanowski doesn’t have adequate enough speed (86) to be a solid user, and isn’t blessed enough in the Zone Coverage category (84) to be an AI-driven player.

97 Hit Power is intimidating, and Romanowski should absolutely be a beast when it comes to stopping the run, but overall the former Broncos and 49ers Legend isn’t an enticing enough option to pivot from many of the MUT meta favorites. 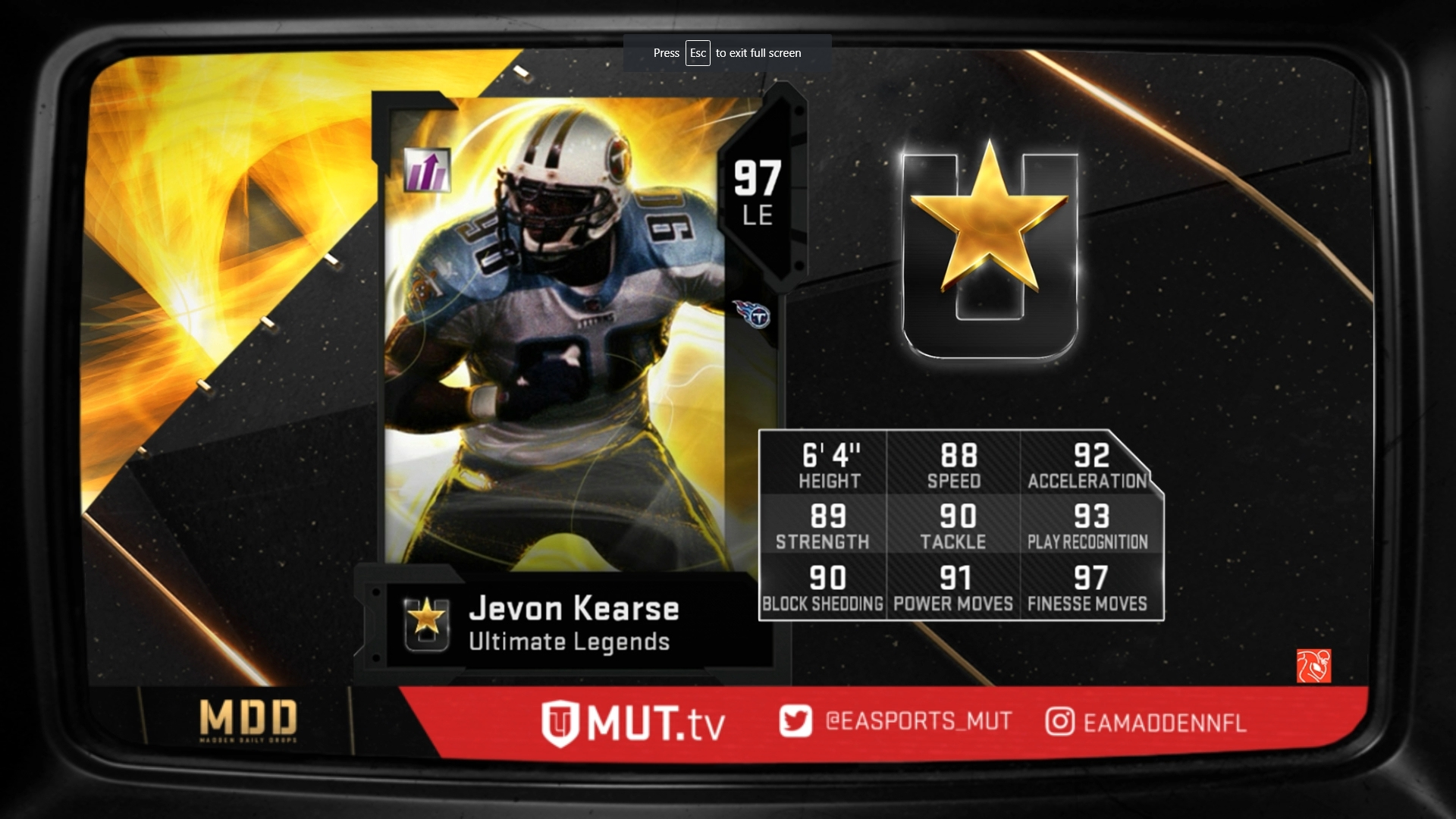 Jevon Kearse is a serviceable option for most Madden 19 players.

Jevon Kearse might actually be a more intriguing defensive option than Romanowski. Essentially a budget version of the recently released Career Tribute Julius Peppers, Kearse sports 88 Speed with 90 Block Shedding, 97 Finesse Moves and 91 Power Moves, making him one of the more versatile pass rushing ends in the game at the moment.

Through the use of the Power-Up option, the Eagles now have three left ends rated 97 overall – Super Bowl Past Hero Reggie White, NFL Honors Chris Long and the aforementioned Kearse. 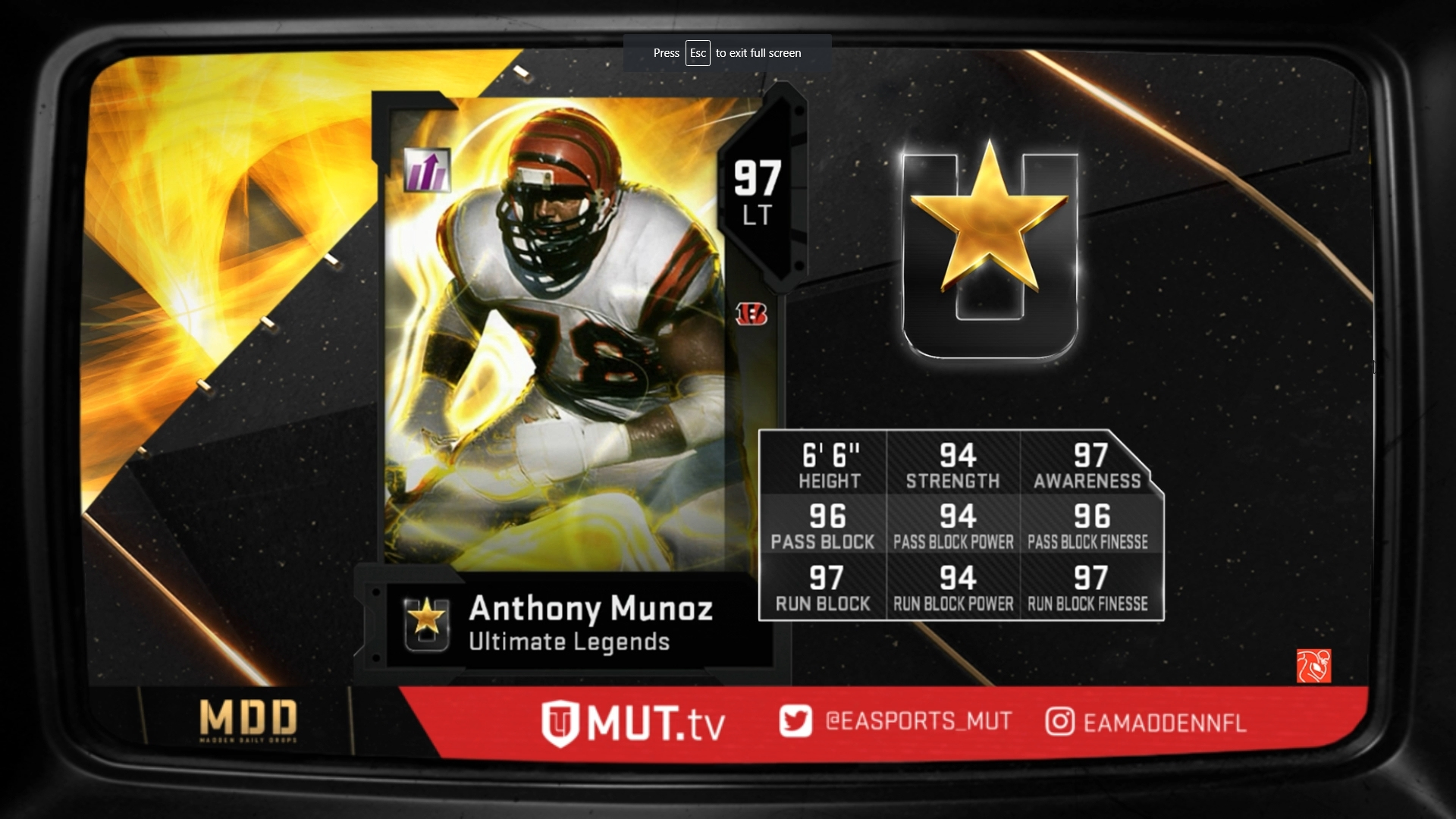 Munoz will slot in as one of the best lineman in the game.

Both Anthony Munoz and Randall McDaniel profile as some of the best options at their current position. The only issue is that their position is offensive linemen, which dampers the exciting release of the Ultimate Legends promo somewhat. 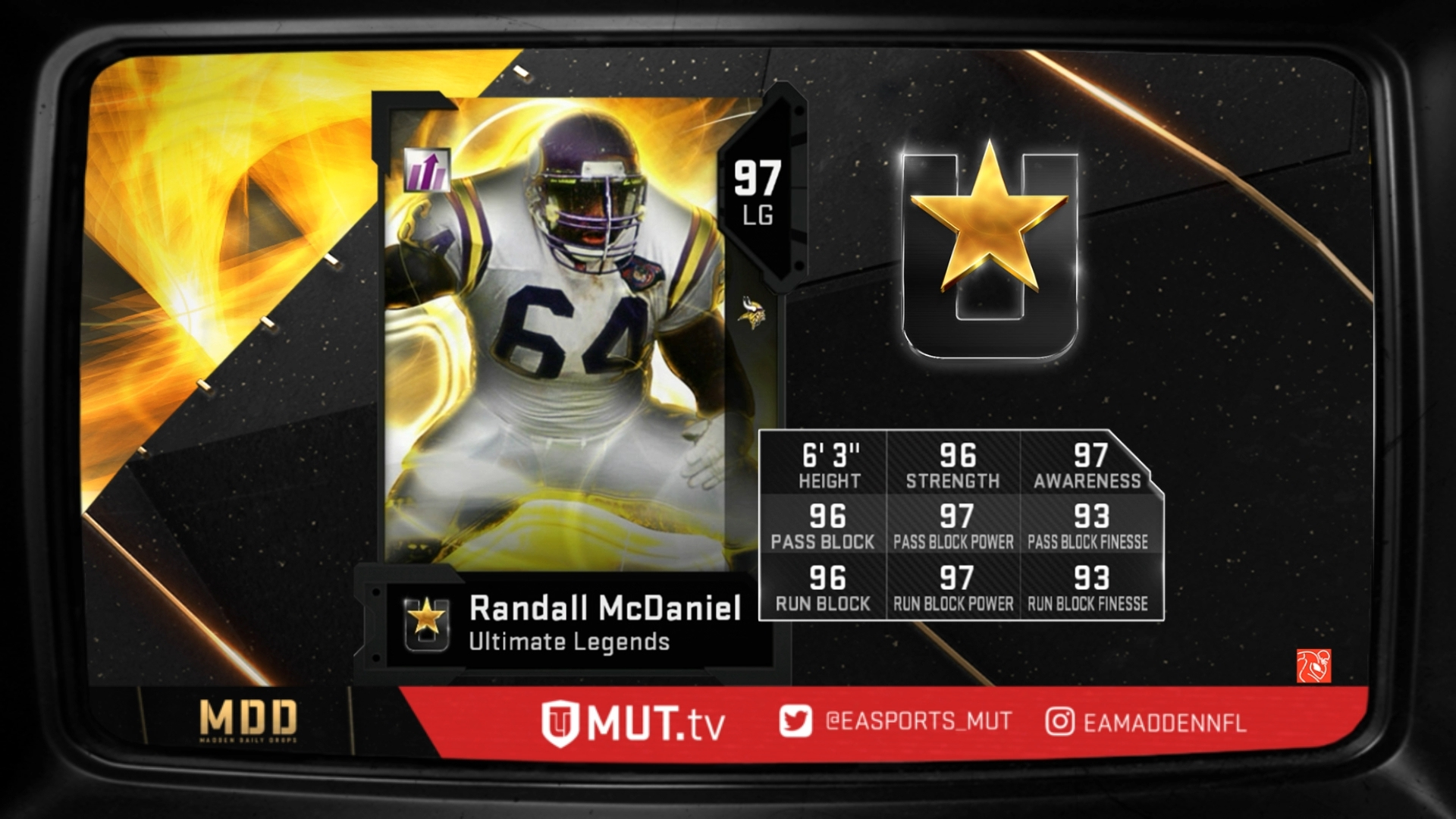 McDaniel isn’t a bad option, but is simply not as useful since he’s an offensive lineman.

The only thing that could make it worse is special teams players, which of course also rounded out the first eight cards to be released under the Ultimate Legends umbrella. 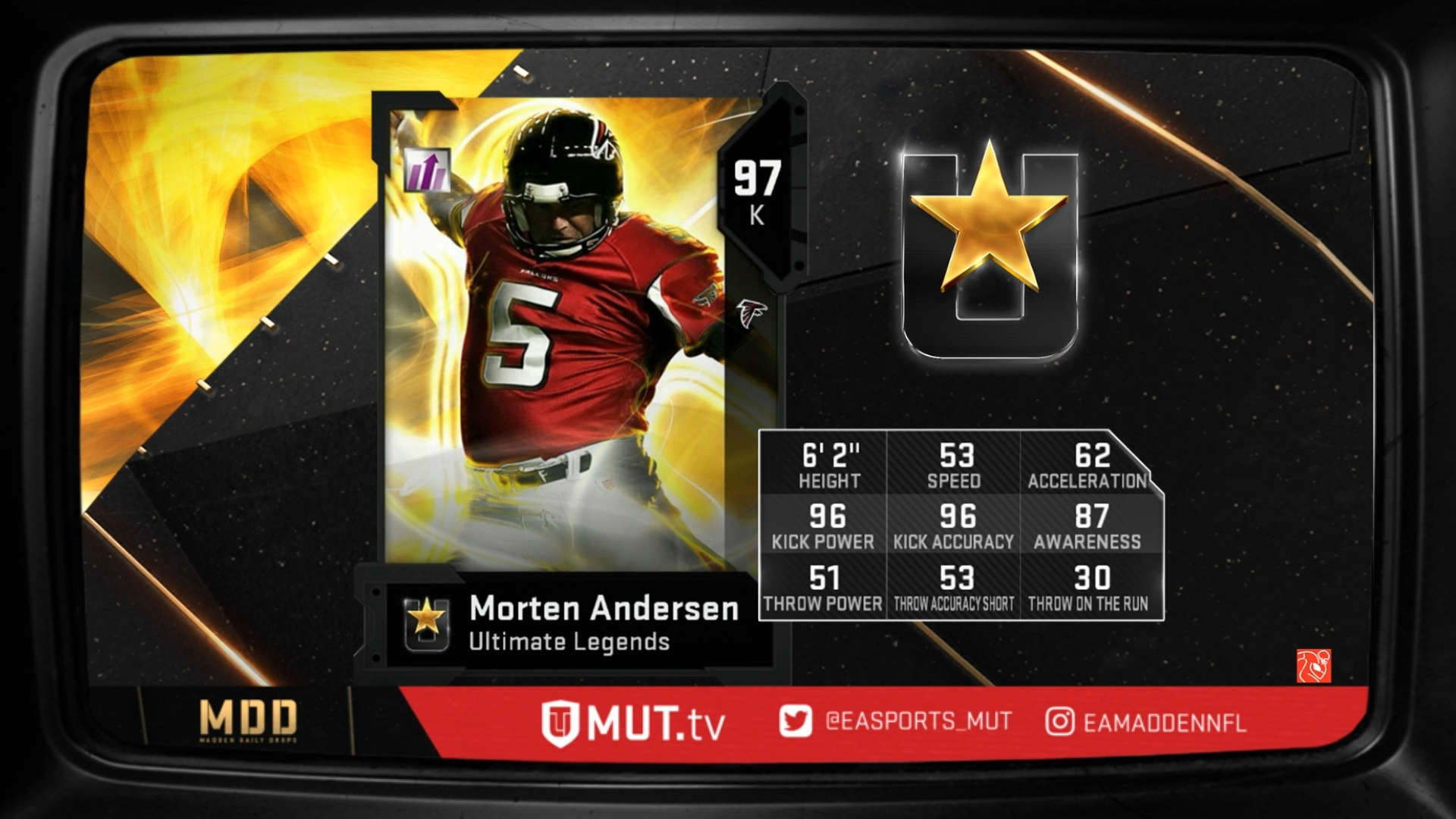 Anderson is a great kicker, but most won’t have much use for him.

At least the likes of Morten Anderson and Ray Guy were highly sought after items simply because they dropped at the very beginning of Madden 19, when few players had the appropriate amount of currency to acquire them.

Still, it’s hard to get too excited about players that likely impact the game on only a handful of plays. 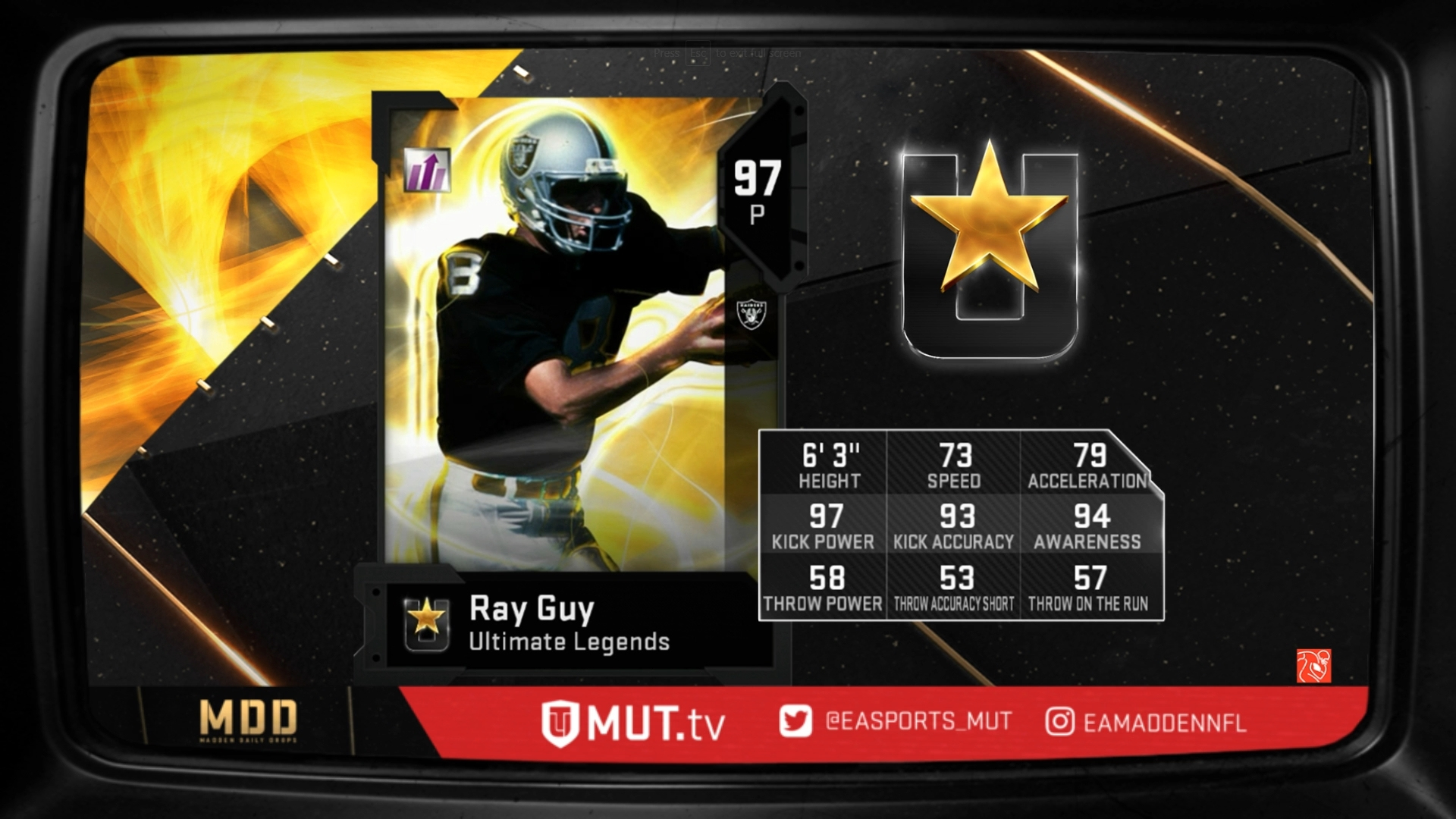 Much like Anderson, Ray Guy won’t have much use to many players.

New solos also dropped as part of Ultimate Legends release, rewarding an 87 or higher overall item relative to the player.

That item can be used for the respective Ultimate Legends set, which requires five separate pieces in order to complete.

Perhaps more importantly, it appears as if users will get a 97 overall player awarded to them after a number of weeks, so long as they complete the necessary solos, but thanks to the design of the set that will likely take some weeks to complete.