With anticipation still building for the yet-to-be-announced GTA 6, an individual claiming to have been a QA tester for Rockstar has shared a lengthy, albeit dubious, leak, with reams of apparent information on the next Grand Theft Auto.

As of December 2019, there is still no indication whatsoever that Rockstar are even working on GTA 6, but considering it’s been over seven years since the last entry in their most successful franchise, it stands to reason that they might be working in silence.

There have been countless leaks about the next GTA, some more believable than others. The most cited of which claims it will be titled ‘Project Americas’, and take place in various locations.

Little is known about the sequel to GTA 5, but leaks keep fans on their toes.

We’ve already summarized every GTA 6 leak (well, the most believable ones) so far into one easy to digest package, but a fresh batch of information has dropped on December 28.

Before going any further, it’s important to note that this information cannot be confirmed whatsoever. There’s every chance it’s at least partially fictitious. However, there are some nuggets here that might just catch a GTA fan’s eye.

The ‘leak’ comes from an anonymous source who has claimed to be a QA tester who worked on both RDR2 and the next GTA. The post was promptly deleted from Reddit by moderators, but the reason for its removal is not clear.

The main focus of the leak is on the map itself, which is apparently “huge”, and spans two major cities: Carcer City (East Coast US, based on Boston) and Vice City (Miami). 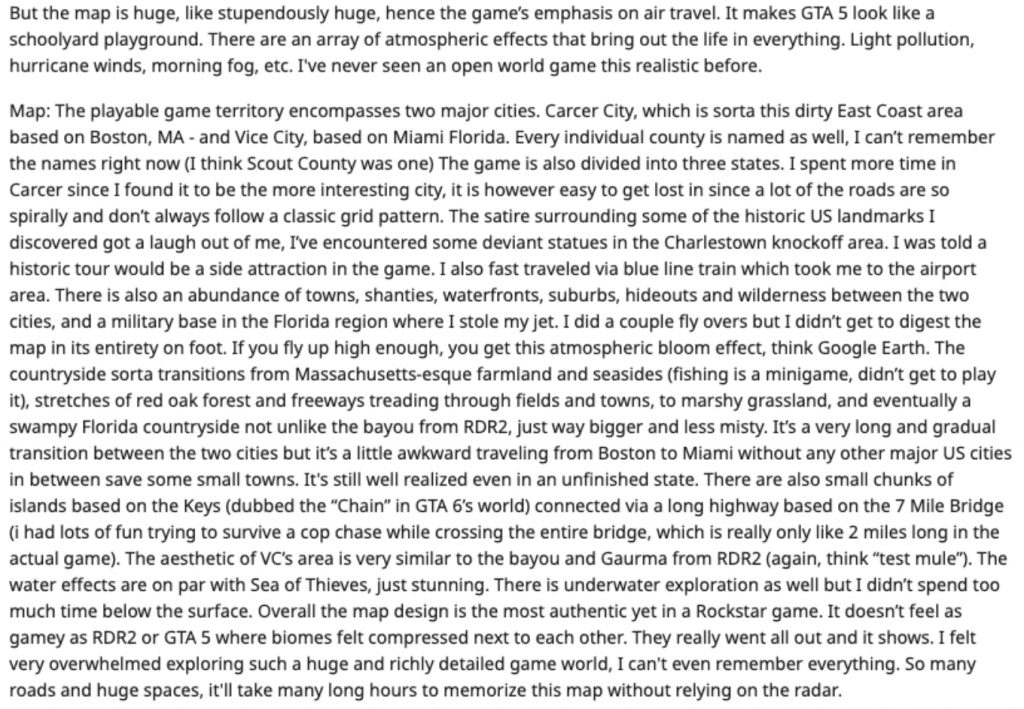 This large section of the leak focused squarely on the map.

GTA 5 broke the mold by having multiple playable characters, and the leak claims GTA 6 will do the same, possibly with two siblings, one of whom is an undercover cop:

“I do know that multiple protagonists are a thing, two of them might be siblings(?). One of them is an undercover cop or something (think Departed movie).”

Mission design has also apparently been “completely revamped.” The leak states, “you can permanently abandon some missions or take different routes that sprout different consequences.”

RDR2’s mission design faced criticism, but this feedback could improve Rockstar’s next game.

There is an abundance of details about GTA 6 posted in the leak, but it is fuzzy at best. It should be reiterated that the source of the leak can’t be verified as authentic, so we can only speculate as to its accuracy.

Currently, GTA 5, especially the online portion, is still performing incredibly well, so Rockstar might be in no rush to push out GTA 6, giving them more time to perfect the game for the next generation of consoles.

You can read the full leak in full below, originally posted to Reddit.