Rockstar’s ‘Project Bonaire’ piqued the interest of both Bully 2 and Red Dead Redemption 2 fans alike, and now the mystery as to what it actually is has deepened even further.

Bonaire first made headlines on August 21 after the Australian ratings board IARC refused to classify the Rockstar project due to the inclusion of violence and sexual content.

On August 30, a leaker claimed to know what the mystery project is, stating that it was in fact a PC port for Red Dead Redemption 2. But the mystery has since deepened after someone from the Bully 2 subreddit emailed the ratings board directly.

What is Project Bonaire?

On September 13, Reddit user ‘AIieNNatioN’ uploaded a screenshot of an email response they’d received from the IARC after they’d inquired after Bonaire back on August 20.

“Thank you for your email of 20 August 2019 regarding the classification of the computer game Bonaire,” the response read.

Interestingly, the reply then went on to state that the classification was made in error: “The Department has contacted the game developer (Rockstar) who advised that an error was made when completing the IARC questionnaire. There is no computer game called Bonaire.” 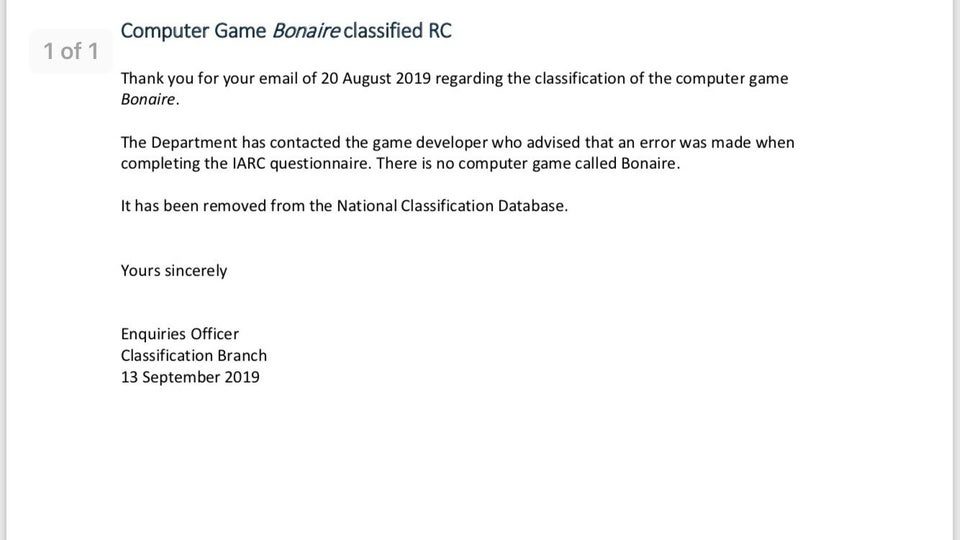 The email the user received from the IARC.
https://www.reddit.com/r/bully2/comments/d3hho8/the_response_i_received_from_the_classifications/[ad name=”article3″]

While this would usually mean that the mystery has been cleared up, another interesting development was unearthed.

The board refused to classify Red Dead Redemption 2 on the same day that AIieNNatioN inquired about Bonaire.

The discovery begs the question: why would the IARC refuse to provide classification for a title that is already released?

It makes the August 30 leaker’s claims of a PC port seem all the more credible. Get your tin foil hats out – we’re strapping in.

As with all conspiracy theories and rumors, nothing should be taken as the truth until the game developer comes out and confirms it itself.

While the PC port for RDR2 is still unconfirmed, it is looking more and more likely. Stay tuned to Dexerto for any further developments.