Pokimane and Gears of War former pro Jribs started off hot, grabbing four of the first 12 elims to start the match.

An exciting scenario played out earlier than expected when huge names all converged on a small space near Tilted Towers with the Storm closing in. Svennoss, SpaceLyon, CourageJD, Myth and more were all within fighting distance, however they erred on the side of caution and a skirmish did not break out.

Chaos would ensue shortly after when 42 players were still alive in a tiny end game circle, with a rapid 20+ eliminations happening in a matter of seconds.

The stream showed an overhead view of the insanity, with player names barely readable in the congested circle. 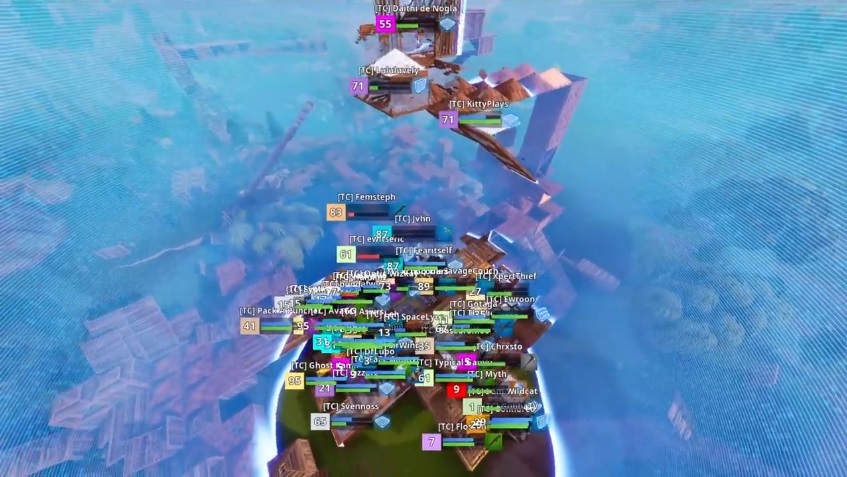 In the end the match felt like a Solos tournament as it was Myth, TypicalGamer and Svennoss remaining as the final three with no teammates. Svennoss and TypicalGamer were looking to make up for their second place finishes in the Solos portion of the Stream-vitational.

TypicalGamer had the early rotation advantage and set up high ground on the Floating Island. Myth and Svennoss battled each other down low, leaving both players with no shields and little health.

It was TypicalGamer dropping down to clean up the eliminations, landing quick shots on Myth and then Svennoss to earn the victory.

The teams were randomly drawn among pros, major streamers and Golden Ticket winners – who are Fortnite fans attending TwitchCon. TypicalGamer’s performance earned EwitsEric a share of $64,000, who compared his fortune to winning the lottery during a post match interview.

For more on the rest of the Fortnite TwitchCon events, check out Dexerto’s TwitchCon Fortnite Stream Hub.