The pair edged out Luminosity Gaming’s SypherPK and pro player Symfuhny in the grand finals to secure the $6,000 first place prize and the prestige of a Code Red championship.

Before reading on, please go over the scoring format so to better understand the remained of this recap.

Code Red is a double-elimination tournament that will start off with 16 teams of two players each. Since there are no publicly available custom games in Fortnite, the competition will follow the standard ‘total of two’ format.

Each round, the Duos that are matched up together will queue into a Squads lobby and try to get more eliminations than their opponent. After two maps, the team with the more kills wins.

Having reached the finals by virtue of winning the Winners Bracket, Daequan and Yanni had to only win one of two matches to claim the championship.

Meanwhile Sypher and Symfuhny, who reached the final by winning four straight matches in the Losers Bracket, had to win back-to-back matches in the final if they were to be crowned champions.

Knowing they were at a disadvantage, Sypher and Symfuhny came out aggressively in match one, taking a quick 16-6 lead after the first map.

This momentum carried into map two, which they won 19-7 to win the match 35-13 on aggregate and reset the bracket, forcing a winner-take-all match two.

Having lost their one game cushion, Daequan and Yanni regained their composure as they took map one 14-10, which put everything on the line for map two.

With the margin razor tight, Sypher and Symfuhny won the map 11-9, but it was not enough to overcome their four elimination deficit, which meant that Daequan and Yanni came out on top 23-22 and took home the victory. 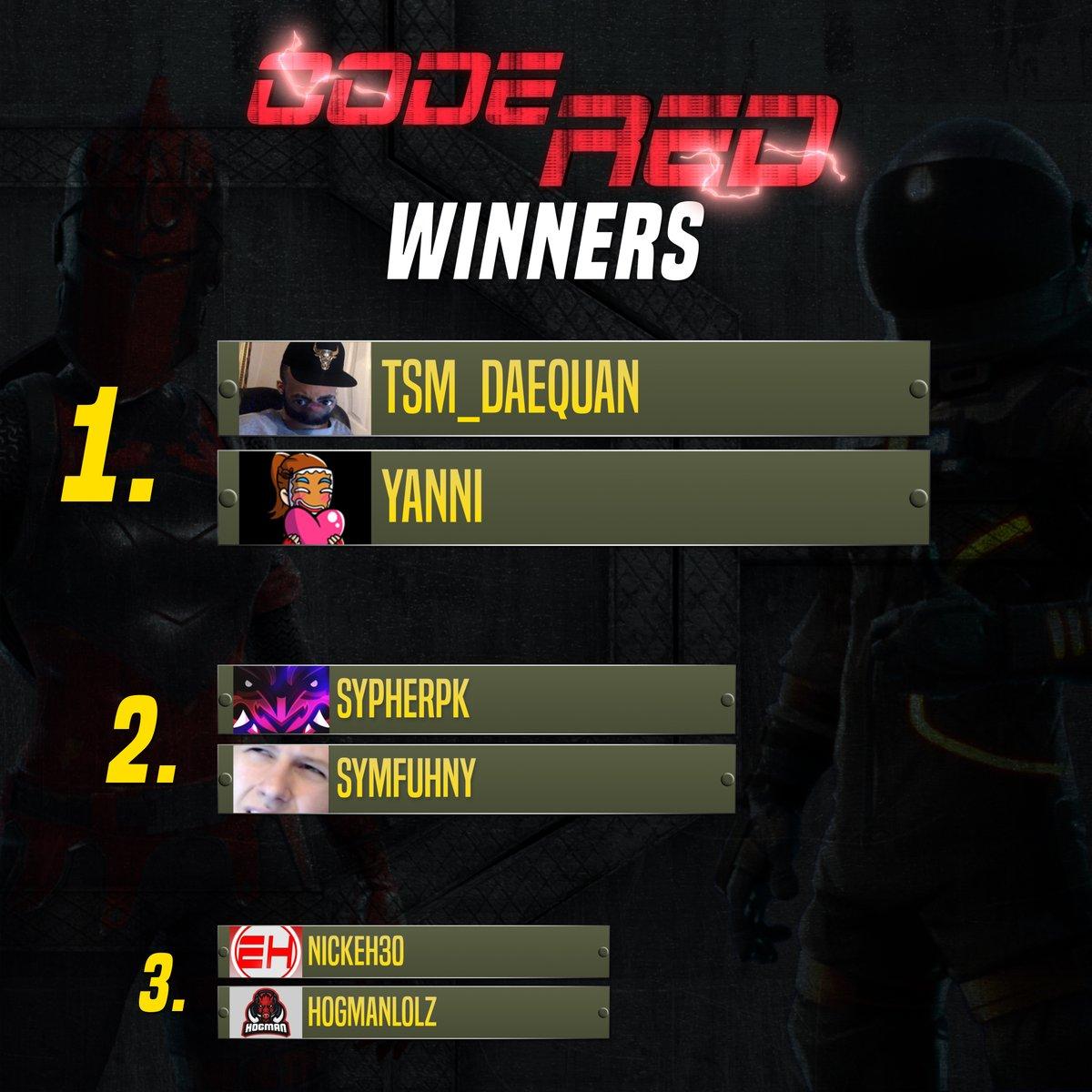 Here are the final placements for the November 20 running of the Code Red Fortnite tournament, along with the prize breakdown.

The finalized Winners and Losers brackets, including the aggregate scores of each match, can be viewed below the final placements. 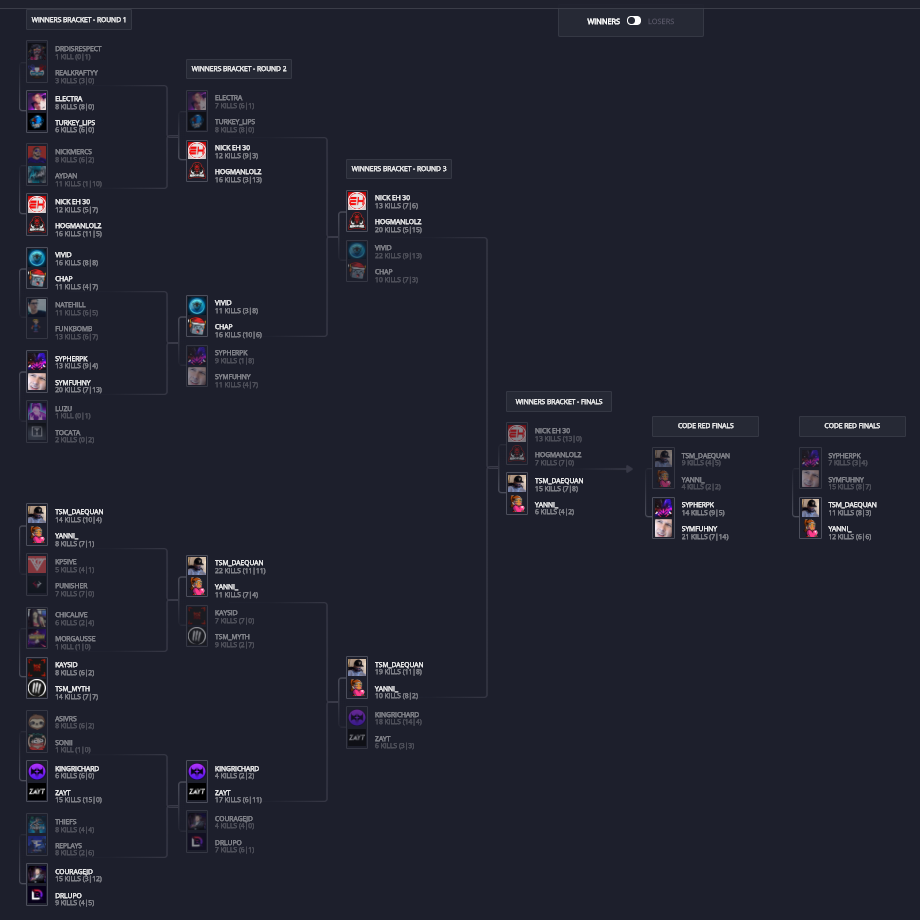 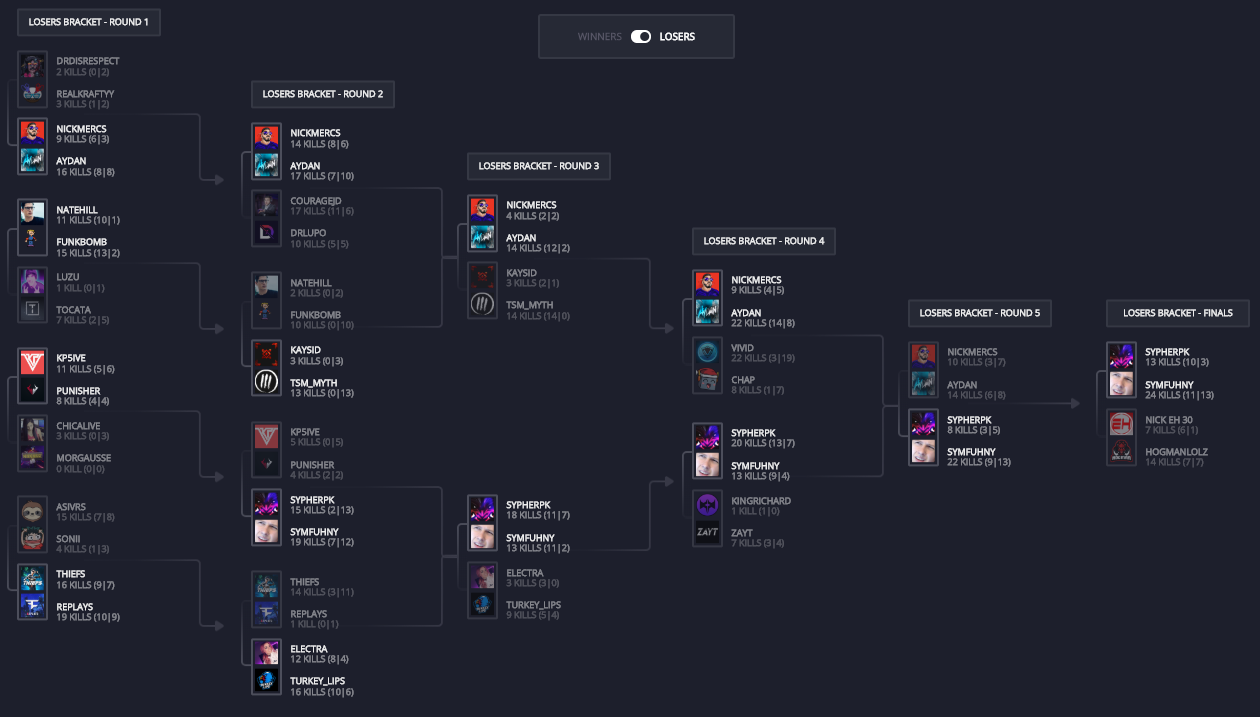 About the Code Red Fortnite tournament

The Code Red Fortnite tournament is the collaborative project put together by popular Twitch streamer Dr DisRespect, the livestream gaming platform known as BoomTV, and EsportsArena.

The second running of this tournament featured some of the biggest names in the Fortnite community, including pro players and content creators from orgs such as 100 Thieves, FaZe Clan, Team SoloMid, Ghost Gaming, Team Liquid, and others.

The winners of the first running of Code Red were TSM Hamlinz and Reverse2K, but neither participated in this week’s competition.

More information about BoomTV and the Code Red tournament is available on their website HERE.