Professional Fortnite player Turner ‘Tfue‘ Tenney was furious when he found himself on the wrong side of a frustrating glitch with a downed opponent which ended up costing him the match while playing in scrims.

Fortnite remains one of the world’s most popular games over two years after its release, and Tfue is one of the biggest names associated with the battle royale title, bringing in thousands of views while he streams and winning a number of esports tournaments throughout his career.

Despite playing the game for years, it doesn’t mean that he doesn’t get frustrated by the same bugs that normal players deal with, and couldn’t believe his eyes when he encountered a strange glitch involving a downed opponent that leaves you helpless to defend against attacks from enemy players. 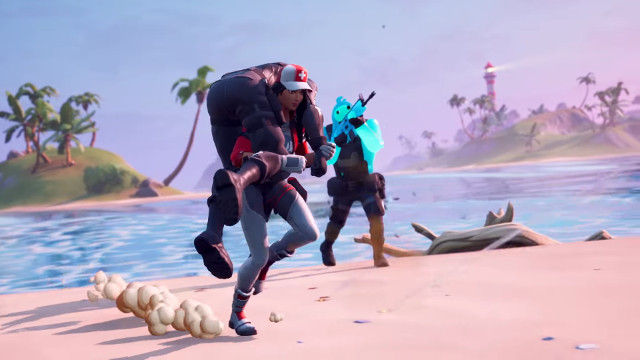 Fortnite introduced the ability to carry downed opponents, but it appears to be causing issues.

At the beginning of Fortnite’s Chapter 2, Epic Games introduced the ability to carry downed opponents, meaning players can pick up and move their teammates who are knocked down, or grab opponents and take them away from their squad so they can’t be revived. This new mechanic can be extremely useful, but it appears that it’s causing issues as Tfue found out during pro scrims on January 13.

While playing alongside an already-eliminated Scoped, Tfue managed to take down an opponent with a Tactical Shotgun, competing in the endgame of the match as the final 20 players battled to secure victory. With an enemy pushing behind him, the 22-year-old quickly spun to face his opponent, hoping to blast him with the weapon too, only to find the player he had just taken down appear on his shoulders, leaving him defenseless with no gun in hand as he was wiped out of the match.

“No, why is that a bug, man?” fumed Tfue. “Like it’s still in the game bro. Nice, I’m holding a f**king dead body so I can’t shoot. I hear a kid coming up behind me and the next thing you know, I’m holding a dead body. This is f**king great. This is sick.”

This glitch can cause issues for players at any time, but in the heat of battle at the end of a match, there likely couldn’t be a worse moment to be affected by it. It’s no surprise that Tfue was frustrated, as with Storm Surge activated he was in the final moments of the game and may have believed he had a chance at winning the match had this not happened to him.

Unfortunately for the pro player, there’s currently no confirmed fix on the way from Epic Games, but many will be hoping that the next patch for Fortnite will address it, with the 11.40 update expected to release over the next few days.