Epic Games’ Summer Skirmish competitive series has given many aspiring Fortnite players a once-in-a-lifetime chance to achieve their dreams.

One competitor who has taken full advantage of his opportunity is ‘NotVivid,’ who has won three of the five events that have been played so far.

NotVivid was initially invited to participate in the Summer Skirmish due to his strong performances in the public ‘Showdown’ in-game competitive Fortnite events, but his Skirmish performances have now earned him an entry nearly every week.

His total winnings have now reached $150,000, an incredible sum of money over a short period of time.

Speaking with hosts ‘MonsterDFace’ and ‘TwoLoudTX’ on Dexerto’s ‘The Fortnite Podcast,’ the 20 year old recounted how his family did not initially realize what his son was actually achieving. 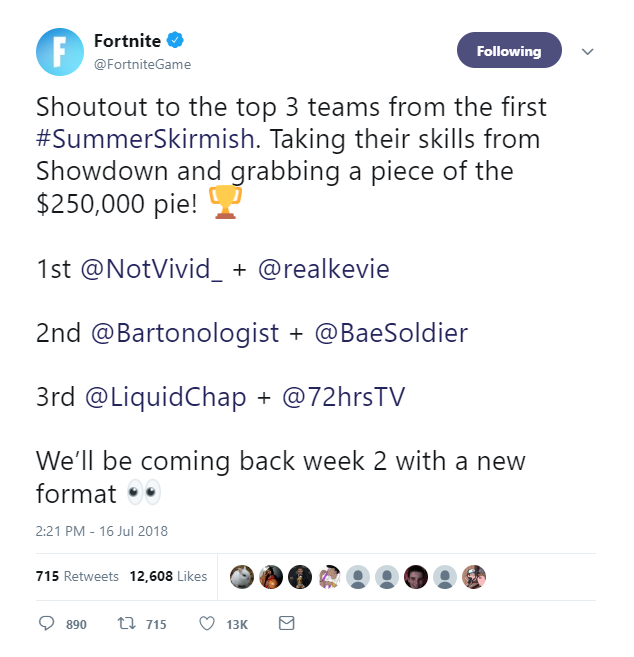 He went on to describe how the $70K he won in the Week 4 tournament was what finally got his dad’s attention and made him realize what was going on and want to know more.

“Then Week 4 was like ‘dad I just won $70,000. […] At this point he’s like “is there anything to look up online to see this stuff.’ And I believe like Bleacher Report, you know I linked him all that and on Facebook he was seeing so much stuff because, you know, Fortnite is huge so that’s stuff everywhere. He asked me ‘what’s your name on Fortnite?’ and I said ‘NotVivid’ and he’s like ‘no shit, that’s him, that’s my son.’ I think this past week, Week 5, I called him on stream, and yeah he just keeps saying ‘wow.’ “

Ultimately, NotVivid’s incredible achievements have earned his father’s respect not only towards him, but the gaming and esports industries as a whole.

“I can tell he’s pretty impressed. He sent me a text somewhere along the lines of “sorry for ever doubting your video gaming” and stuff like that. So I think it was a lot about him starting to respect the industry and stuff, because, you know, a lot of people, and nothing against people who are of like older generation, but it’s very hard for them to comprehend, because they don’t comprehend technology, most of the time. Let alone, you can make money from technology? And stuff like that. I think he’s finally starting to do his own research and figure it out for himself that ‘wow, it is possible. If you can do it, you can do it.’ “

The entirety of NotVivid’s interview on The Fortnite Podcast can be viewed below, with the segment regarding his family starting at the 36:50 mark.