The cross promotion between Samsung and Fortnite that has brought the rarest skin to the game could also be an avenue to add some more exclusive content to Samsung product owners in the near future.

Epic Games has routinely used its game to collaborate with other brands for fun, promotional events or campaigns, and a new concept from known online leakers suggests Fortnite and Samsung Galaxy owners might enjoy more unique add-ons.

FNBR Leaks recently unveiled a series of photos that incorporate the galaxy texture that was first used for the Fortnite Galaxy Skin, only now it looks to be applied for item-wraps in the game. 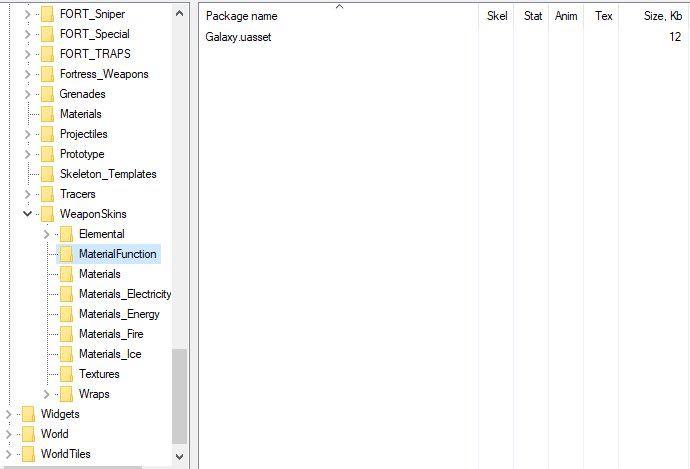 The location and file of the Galaxy asset.

FNBR Leaks are not claiming that the photos are leaks or made via a custom texture, rather they are in-game renditions of certain items simply wrapped in the Galaxy texture already found in Fortnite’s files.

“It’s not a custom texture nor a leak, this is the Galaxy texture put on weapons,” they said on Twitter.

The file in question is named “Galaxy.uasset” and can be traced under the “Weapon Skins” folder in a backlog of file trees.

FNBR Leaks made concept skins for the the AR, Pump Shotgun and Bolt-Action Sniper Rifle as well as the Quadcrasher. The leakers strongly believe that the inclusion of future Galaxy-themed items or sprays will be incorporated at some point.

Yes, this is a real image. Not photoshopped, this was simply posted to show what the "possible" Galaxy Skin Wrap could look like. This was made by putting the Galaxy Texture on a weapon.

Regardless, the photos give a much clearer idea of what a future extension of the Galaxy motif would look like if applied to weapons.

The release of Season 7 on December 6 brought a whole heap of new content for players to digest, and for data miners, it brought troves of files to meticulously dissect, which have subsequently led to a number of leaks.