In a single emoji reply to a tweet, Epic Game’s creative director opened the possibility to a future Fortnite-branded soda.

The company has already made real-world counterparts to items and objects from Fortnite such as a life-size replica of the Battle Bus and Llama Pinatas in various real-world locations.

It’s not much to go off of, but taking inspiration from in-game items and translating them into real life is something Epic Games is familiar with doing in the past.

The minds behind Fortnite offered a special greenish-blue brew for Twitchcon 2018, aptly named Slurp Juice. The drink was exclusive to a singular, small booth and only for Twitchcon-goers, but the idea could carry onto something more permanent.

As far as investment, it wouldn’t be too far from the realm of possibilities for Epic Games to hop on board. The company famously went ahead to pledge $100,000,000 into Fortnite prize pools for the 2018-2019 season. 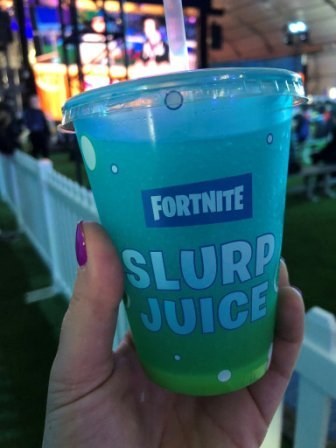 The Slurp Juice station brought the in-game item to the real world.

Fortnite has seen astronomical success and has been widely recognized by prominent figures and groups outside of gaming.

With the international notoriety of the game and proven public interest in idea, a Slurp Juice soda might actually come to fruition.

The game’s marketing has already spilled over to other facets in life such as merchandise, Monopoly games, llama plushies, Nerf guns and more so adding a drink to an already tall order wouldn’t hurt.