Fortnite challenges for Week 9 of Season 6 have been leaked

The ninth set of weekly challenges for Season Six of Fortnite Battle Royale have been leaked online.

As is usually the case, the weekly challenges have been discovered in game files and leaked ahead of when they will be released in-game, which is likely to be on Thursday, November 22.

Here is the full list of the upcoming set of challenges, courtesy of FortniteInsider, a news and leaks outlet for the popular battle royale title. 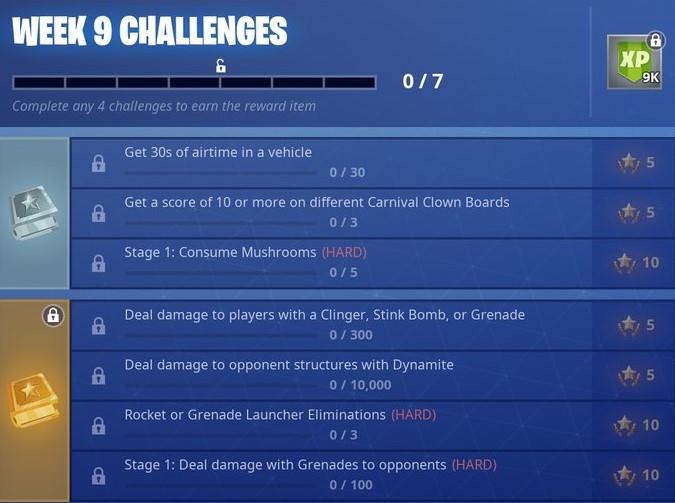 This week’s challenge set once again features a three-stage quest as the final challenge, the first step of which is to deal damage to opponents with Grenades.

The other two stages for this challenge have not been leaked, so players will have to wait until the set goes live to see what other requirements they have to meet.

The brand new Dynamite explosive item is also featured, along with the new Carnival Clown Boards that players will have to locate on the map and score 10 or more points three different times.

The rest of the challenges are pretty straightforward and similar to those from past weeks. However, keep in mind that this list if not official as Epic Games can always make some last minute changes before releasing them in-game.