Season 7 of Fortnite is rapidly coming to an end, and fans of the game are getting an early glimpse at what will be the major event to kick off Season 8 – a massive earthquake that has already begun to tear open the game’s map.

Data miners found files in the game’s update files which signal that an earthquake is coming to Fortnite, with leaks from the February 14 update suggesting that the event titled ‘Cracken’ will do some serious damage to Tilted Towers.

Season 8 is expected to go live on Thursday, February 28, and Fortnite players have already begun to feel tremors shaking the island during matches. Things took an unexpected turn on February 14 though, when massive cracks began to appear in on the map.

When one of the many tremors that have rocked Fortnite hit, players thought nothing of it, chalking down as part of the upcoming event and nothing more.

On closer inspection though, a massive crack has appeared on a small hill southwest of Tomato Temple. It is several meters long, and winds around the top of the hill, with many suggesting that it may open further as time goes on.

A second crack then appeared a few hours later, this time to the west of Tomato Temple.

Situated between the temple and Lazy Links, this second crack is much larger than the first one, and splinters off in two different directions. 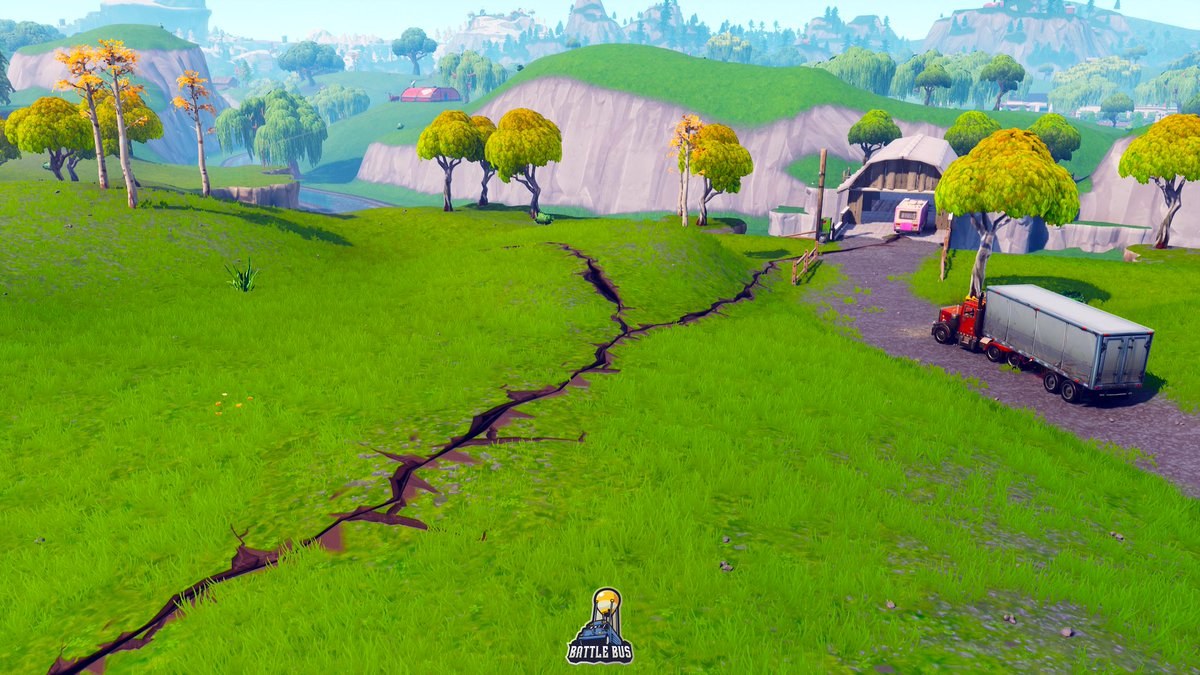 A second crack appeared at the bridge near Lazy Links.
[ad name=”article4″] 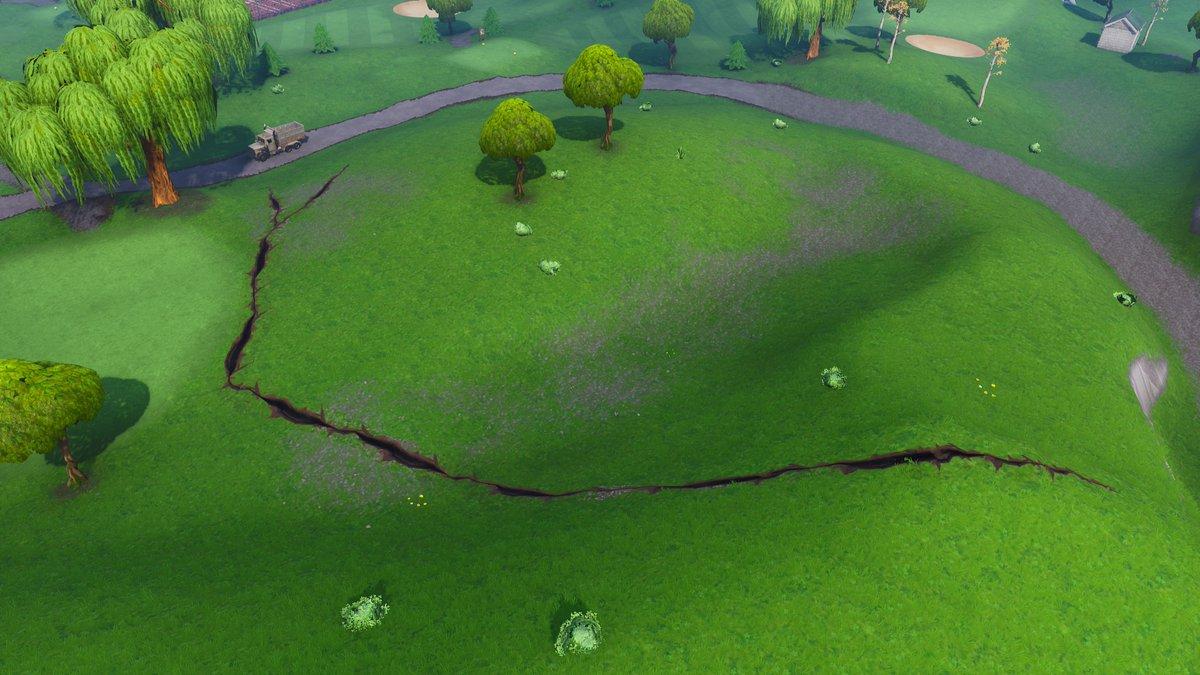 Lazy Links has also been affected by the tremors.
[ad name=”article5″]

Unsurprisingly, more cracks have continued to appear across the Fortnite island, with a huge crack appearing to the North of Dusty Diner, directly beside the first crack that was spotted when the tremors began.

A fifth crack has appeared north of Dusty Diner, right next to crack #1 #Fortnite pic.twitter.com/bj2eeQ7n2v

Another crack then appeared beside Dusty Diner, this time to the northeast of the diner. 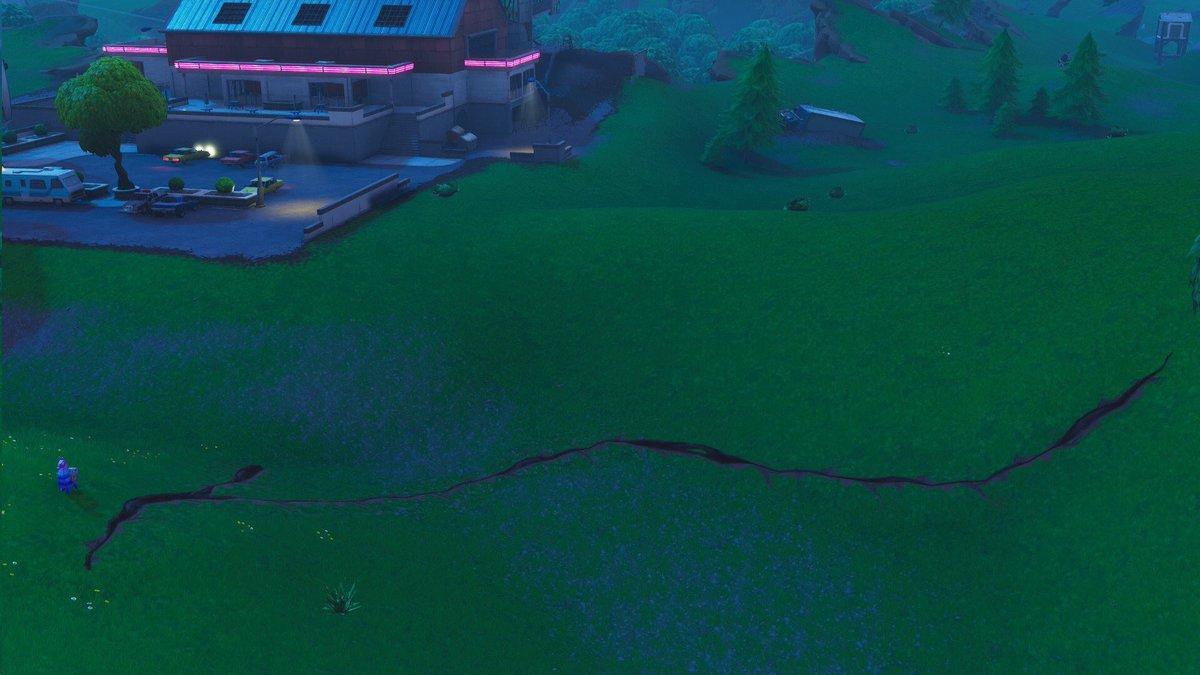 A crack appeared near Dusty, and it might be the biggest one yet.

Cracks have also started to appear at The Block, an area in the north-eastern corner of the map which showcases player-built creations for a limited time inside the game. 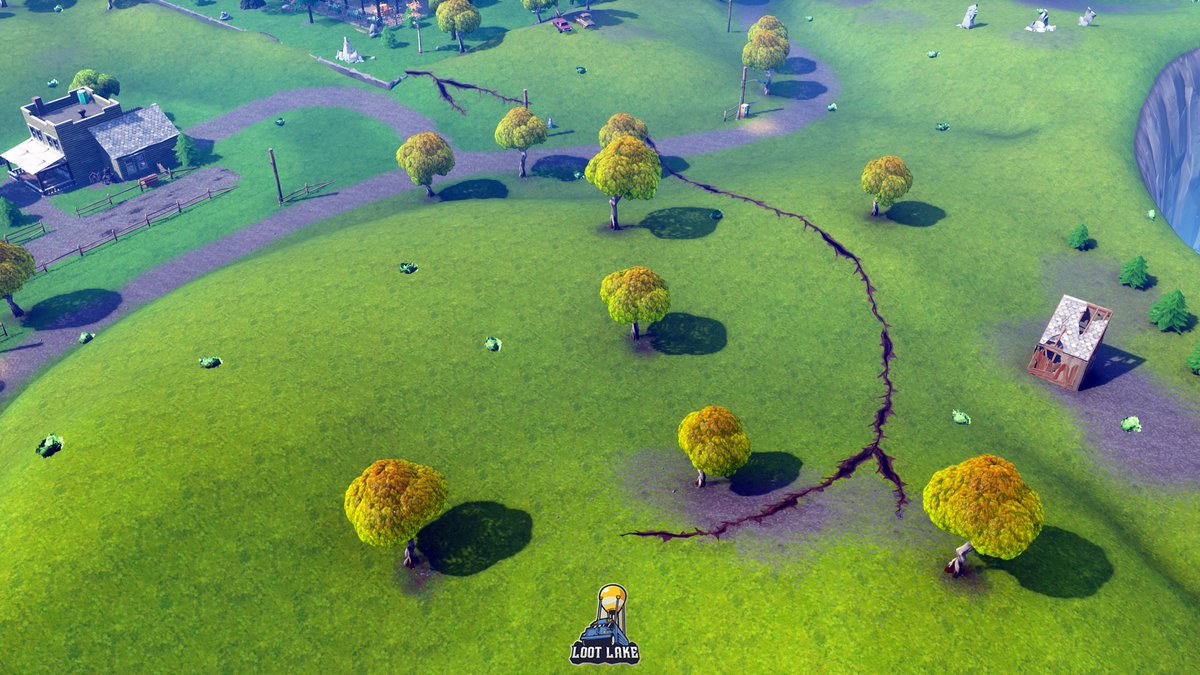 Two cracks have appeared at The Block.

Salty Springs has become the latest area to be hit by earthquakes, with a massive crack opening up directly beside one the tower that overlooks the location. 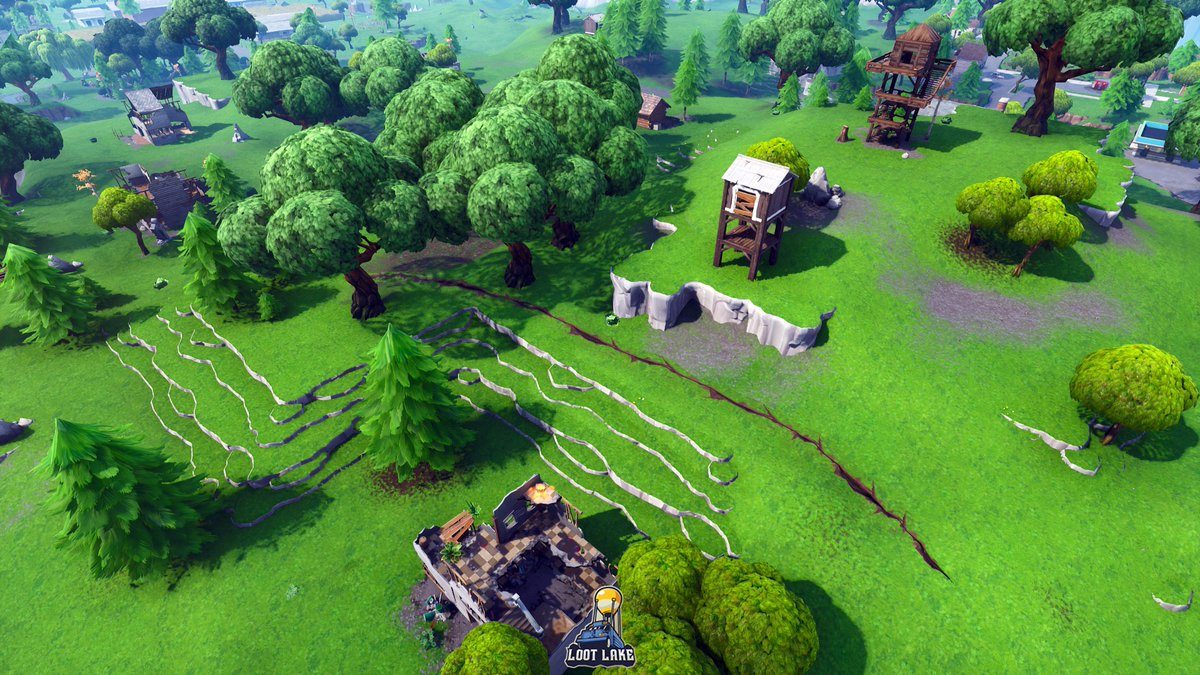 Salty Springs has become the next location to suffer from the earthquakes.

Wailing Woods has been affected by another tremor, with a huge crack forming on a hill directly south of the forest. 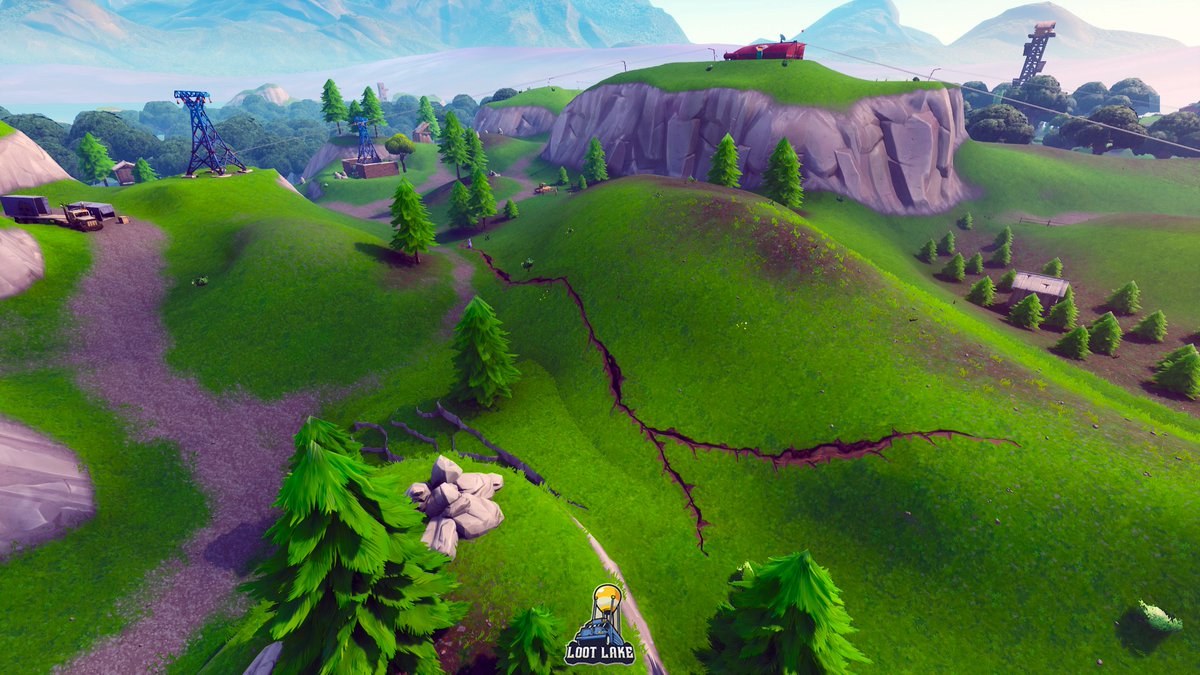 A massive crack has damaged a hill south of Wailing Woods.

The bridge between Lazy Links and The Block has also been hit by another tremor, this time destroying the bridge. 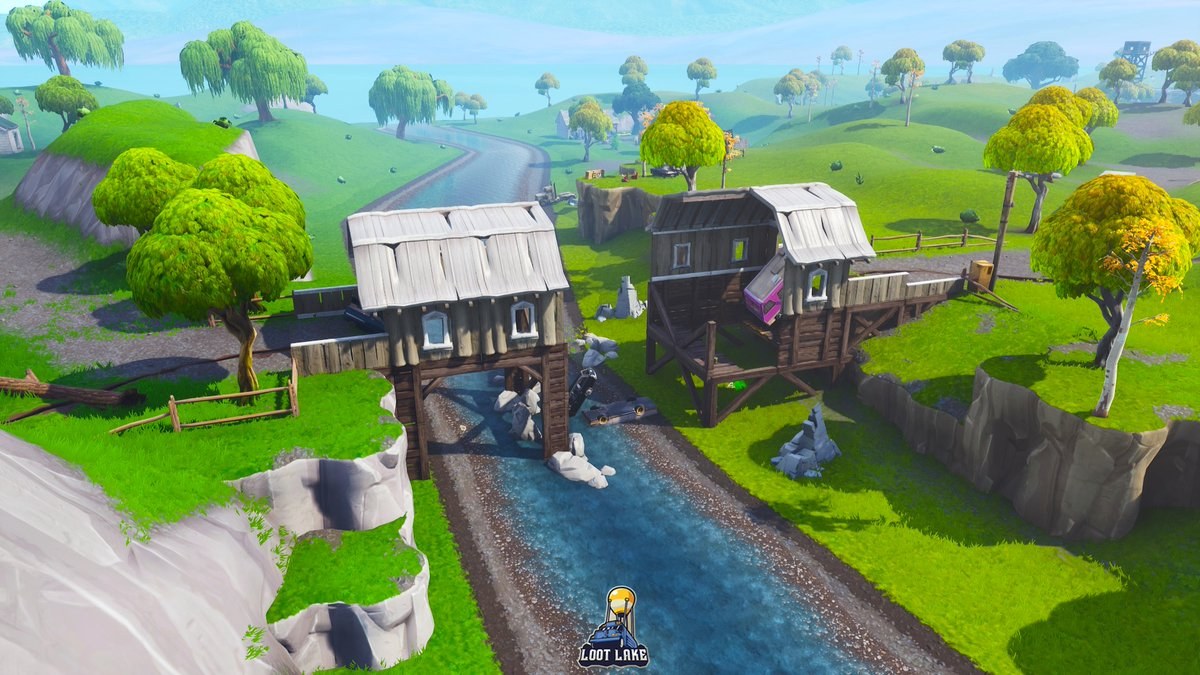 The middle of the bridge has collapsed due to the earthquakes.

Another crack has also opened up near Loot Lake, beside the destroyed Battle Bus which crashed into the ground. 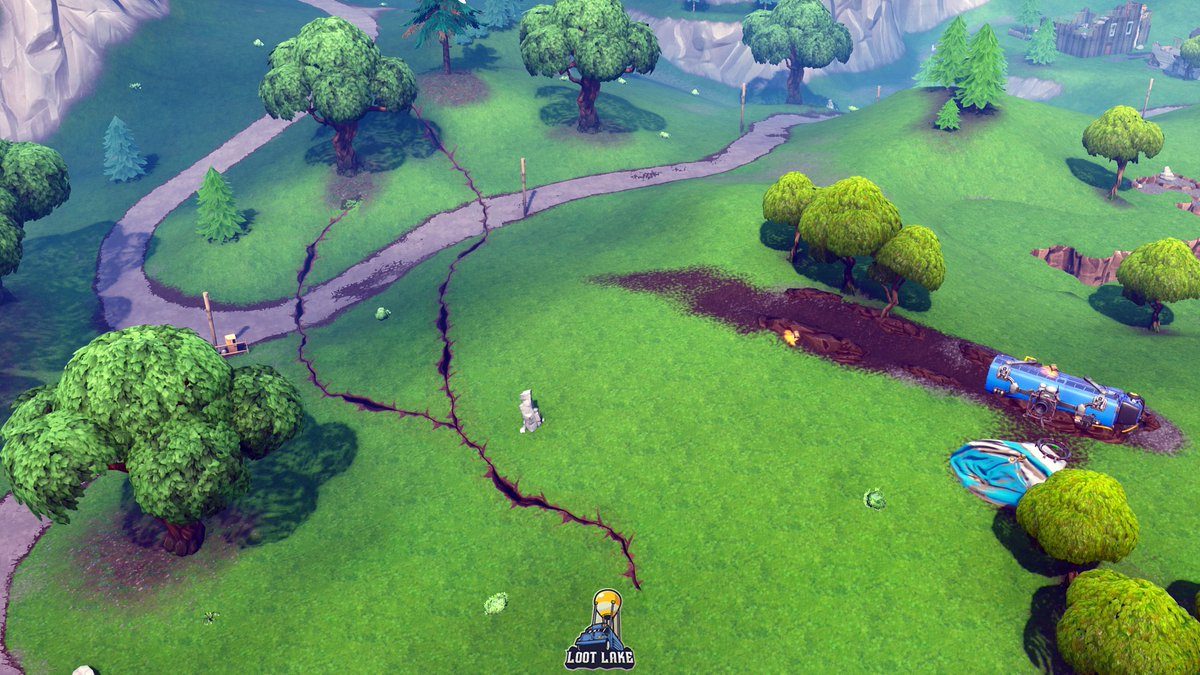 The crack has opened up beside the crashed Battle Bus.

While many thought that the cracks could be related to Tomato Temple due to the location of the first two openings, the openings at Lazy Links seem to have cast doubts over that theory.

It’s likely that more cracks will continue to open up as we get closer to Season 8, and we’ll be sure to keep updating this post as new ones appear.

The timetable for each and every scheduled crack for Fortnite’s earthquake seem to have been leaked by Twitter users Lucas7Yoshi and Im_Rubic.

The pair, who have been monitoring the in-game event closely since it started, have revealed a schedule which suggested that the entire landscape will soon look very different to what we’ve come to expect.

After inputting the data here are the results: pic.twitter.com/ZJlfZCJ0WI

Whether or not this timetable is accurate remains to be seen, as there has been no official word on the earthquake from the developer as of yet.

The Fortnite map seems to be undergoing some major changes right now, though, as we look towards the game’s newest season. We’ll continue to update this article with any more updates as and when we get them.