The current ‘season’ of Fortnite Battle Royale is set to end later than planned, according to dates found in the game files and leaked online.

Fortnite is currently in its fifth season, with each having a unique theme and new sets of items, weapons and map POI’s, keeping the game fresh for the massive player base.

Each season so far has lasted 10 weeks, with the fifth season currently about to head in to week 7.

It was expected that season 6 therefore would begin on Tuesday, September 25, with a new theme, possibly Halloween related, giving the game a makeover moving into the winter months.

But, according to a post by known leakers ‘FNBRLeaks’, the sixth season appears to have been pushed back by developer Epic Games. 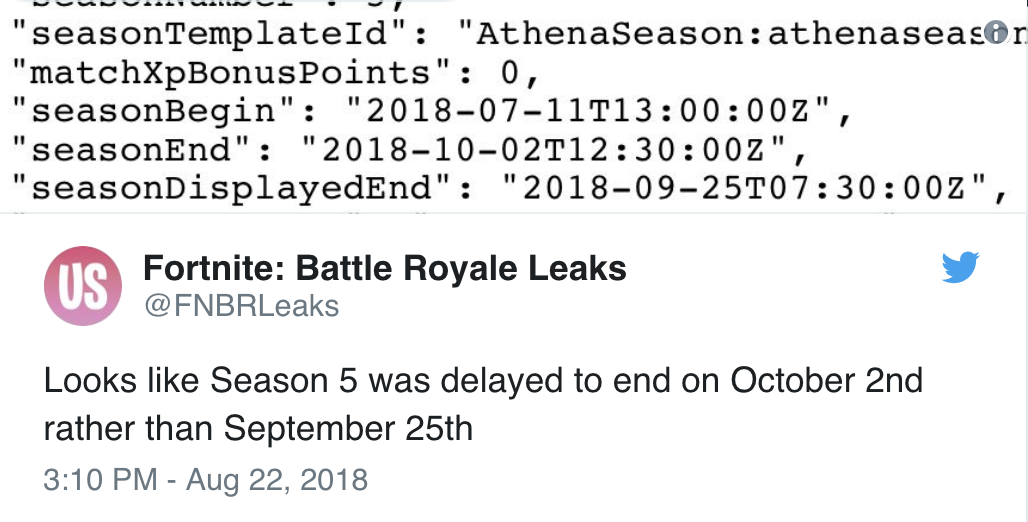 This is of course unconfirmed, and given Epic Games like to keep fans on their toes and always guessing, this could change in the coming weeks.

However, given the amount of radical changes and overhauls that came with the end of season 4 moving into 5, it wouldn’t be surprising if Epic pushed back the end of season 5 to give them more time to work on the upcoming season.

There is almost nothing known about what to expect in season 6, but odd map changes have been spotted, related mostly to the ‘rifts’ dotted around the battle royale island, which could lead to clues.