An Exclusive Gamescom 2018 Spray Could Be Coming to Fortnite

With Gamescom 2018 just around the corner, an exclusive in-game spray should also be making its way to Fortnite Battle Royale in the near future.

The information about the spray originally came from the well-known leaking account @StormLeaks on Twitter and shows a Fortnite Llama sporting some pretty cool bling!

In fact, the potential new spray is the same as the image that was used in Epic Games’ initial announcement about Fortnite featuring at Gamescom 2018, so the leaks certainly holds some merit.

Nothing has been seen or heard about the spray since it was originally leaked but it is beginning to circulate again with Gamescom set to begin tomorrow. 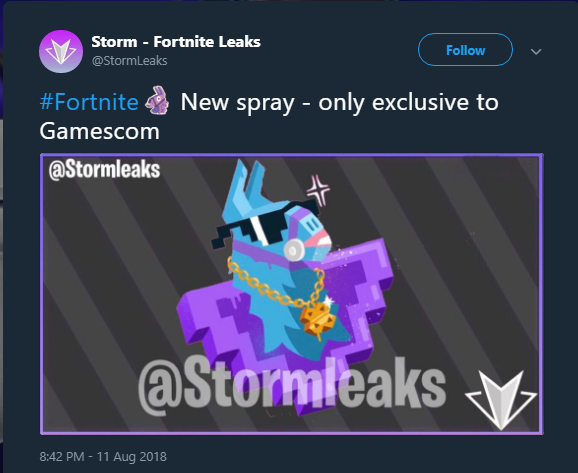 Fortnite’s involvement at the major gaming convention in Germany was announced earlier this month, with the development team revealing that they will be in Hall 8.1 with an “extra special Fortnite experience” waiting for attendees.

“Alongside numerous Fornite-themed activities, you’ll be entertained by talented community members on our show stage, and maybe you’ll even get to meet your favorite streamers and YouTubers shooting new videos in our content creator village!

HandOfBlood and Trymacs will be with you all week, hosting our stage program in their own unique way. We will release more details on this in the coming days.”

With the Gamescom 2018 action due to begin in Koelnmesse, Cologne on Tuesday, August 21, the addition of one or two Gamescom-exclusive items and cosmetics in the coming days would not be surprising.

How Epic Games plans on keeping the new spray exclusive to Gamescom is currently unknown but we will keep you updated as more information becomes available.