PSG left-back Layvin Kurzawa is a defensive dynamo on the pitch, and that idea is very much present in his five-at-the-back Ultimate Team XI, which is stacked with legends.

Footballers don’t get a lot of downtime at the moment, with the football calendar as stacked as it currently is. But when players get a rare chance at some downtime, it’s no surprise to see them loading up Ultimate Team.

We’ve already seen FIFA players face off against the likes of Manchester United’s Odion Ighalo and Chelsea’s Mason Mount, who both have incredibly stacked teams, but Kurzawa has one of the hardest-to-beat line-ups we’ve seen.

Featuring a five-at-the-back formation, nine legends, and his own 99-rated player card, opponents will have a tough time trying to best Kurzawa in a FIFA match.

It’s clear Kurzawa goes for the tactic of putting defense first, with a 5-2-1-2 formation and a backline stacked with ICONs including Paolo Maldini and Roberto Carlos. That leaves an attacking trident featuring Brazil legends Pele and Ronaldo Nazario, plus Spaniard Emilio Butragueno, to put opponents to the sword. 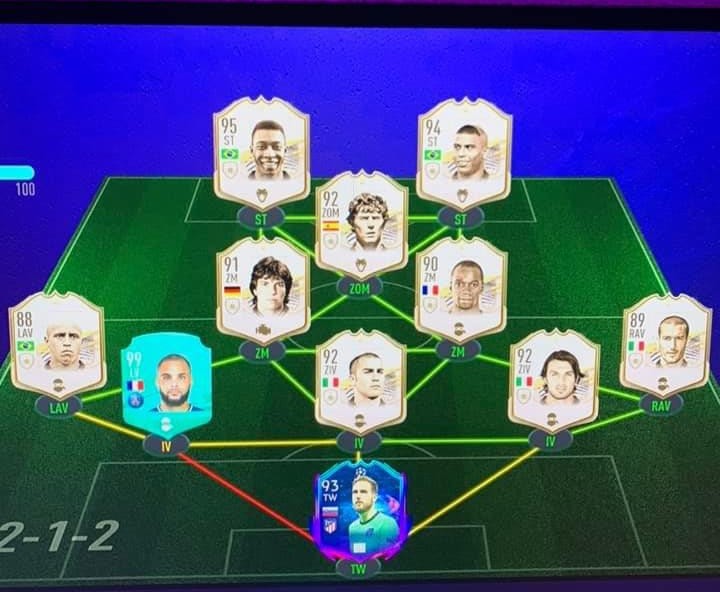 It must be pretty nice for Kurzawa to be able to put so many legends into his team. With such a strong defense, coupled with top-tier CDM’s Makelele and Matthaus patrolling in front, it looks pretty much impenetrable.

One change we’d make is to swap Pele and Butragueno around. With Pele’s higher passing stat, he’s much better suited to the CAM role, and would allow Butragueno to more readily use his pace to get in behind opponents.

If chemistry’s also what you’re after, switching Roberto Carlos and Kurzawa would give both Oblak and Kurzawa a boost with no real tactical sacrifice.

Either way, with a team like that, opponents will find it almost impossible both to score against and to stop the potentially lethal counterattacks.

Liverpool and Portugal star Diogo Jota has had his incredible FIFA 21 Ultimate Team revealed, and it’s no surprise how strong it is given the forward’s obvious talent in EA Sports’ title.

Many Liverpool fans have been delighted with the impact made by Diogo Jota after he signed for the Merseyside club from Wolves during the 2020 summer transfer window.

His pace and quick feet have offered an effective alternative to the established front three, and his impact has already been borne out in some important goals and performances.

Unfortunately, Jota picked up a pretty bad injury back in December and has been sidelined ever since. It seems he’s spending some of his recovery time on FIFA, and his Ultimate Team has now been revealed.

Diogo Jota was in red-hot form for Liverpool prior to his injury.

We’ve already heard of his talents when it comes to FIFA, going an unbeaten 30-0 in FUT Champs back on FIFA 20. His team back then was impressive, but this one is just as strong.

Shared by one Redditor who came up against Jota in Champs, there’s a spot for four of his Premier League colleagues. Nick Pope is in goal, with Adama Traore’s FUT Freeze card at LB. Teammate Joe Gomez is at LCB, with Man City rival Kyle Walker at RCB. James Tavernier’s Headliners card rounds off the most meta back five we’ve probably ever seen.

Into midfield, and meta players swap for pure powerhouses. Vieira, CR7, and Ruud Gullit make up a central three, in behind Diogo Jota’s own 99 OVR pro card. Hirving Lozano’s Headliners card and R9 Ronaldo round off a truly terrifying team. The full team and their ratings are listed below.

Diego Jota in champs from FIFA

With a team like this and Jota’s in-game talents combined, it’s no surprise that he has a reputation as one of the very best pro footballers when it comes to FIFA.

We hope to see him back on the pitch in real life soon.