FIFA 20 FIFA Player Moments
EA Sports have rolled out a new Player Moments SBC for Marcus Rashford in FIFA 20 Ultimate Team (FUT), and we’ve got the cheapest solutions, in-game stats, total cost, and everything else you need to complete it.

Player Moments SBCs are a staple of Ultimate Team nowadays, recognizing a stellar moment of achievement in player’s career, whether it be on or off the pitch.

In the case of Rashford, his newest special item honors his “outstanding community contributions,” in light of his recent efforts to fight for social justice and to get schools to offer their students free meals.

This is Rashford’s sixth different card in FIFA 20, but not his best, since his TOTSSF is 94-rated and still stands as his most boosted version. This Player Moments item is no slouch, however, featuring some top-notch stats when it comes to pace, shooting, and dribbling.

Also, and perhaps more importantly, this one features a four-star weak foot, one more than his default. That’s obviously a major boost, considering that one of the biggest reasons players avoid using him is because of his three-star right foot. 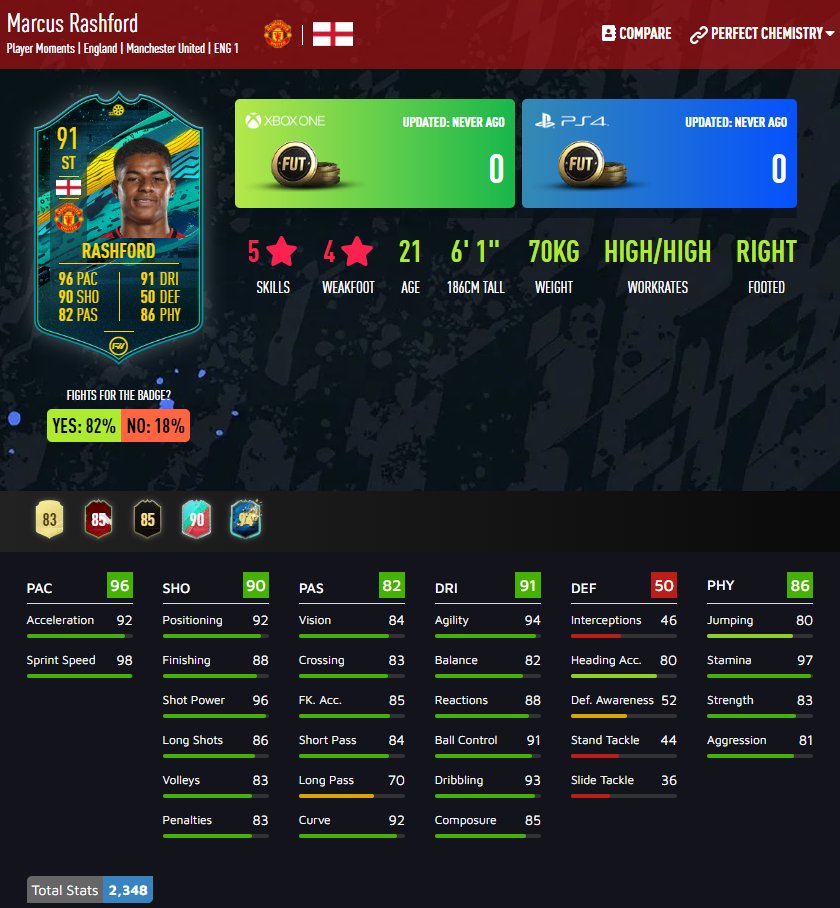 As you’d expect, this sort of SBC isn’t exactly cheap to complete. There are two squad building components, both requiring a specific special item, and they combine to cost around 216,000 coins on PS4, 219,000 on Xbox One, and 231,000 on Origin PC, according to FUTBIN.

Here are the current cheapest solutions to both of these squad building components. As always, these do not require any loyalty or position-change cards. Is it worth doing?

As tempting of a card this is to try and get, especially with that four-star weak foot, it’s ultimately not worth dumping over 200,000 coins into. His 94-rated TOTSSF version costs only 40-50,000 more and is tradeable, and if the weak foot means that much to you, then you’re probably better off saving the money and going after his FUT Birthday card, which has five-stars.

That said, if you already have a lot of the necessary SBC fodder in your club and/or are an avid Manchester United FIFA card collector, then you’ll still find some value in doing this, albeit not much.

Either way, you won’t have too much time to decide; this SBC was made available for a week, which means it will be expiring on Tuesday, June 30.

As always, make sure to check us out on Twitter @UltimateTeamUK for all the latest FIFA 20 news, updates, guides, and more.