FIFA 20 FIFA Ultimate Team
The Summer Heat promo continues in FIFA 20 Ultimate Team (FUT) with the release of a new SBC for Roberto Firmino, and we’ve got the cheapest solutions, in-game stats, total cost, and everything else you need to complete it.

The votes are in! As part of the Summer Heat promotion in FUT 20, EA SPORTS are allowing players to vote for one of three cards to receive boosted stats as well an upgrade to their weak foot and/or skill-moves.

The latest of these votes saw Liverpool forward Roberto Firmino beat out Real Madrid’s James Rodriguez and Olympique Marseille’s Thauvin, as pretty much everyone had expected.

As a result, there’s a new SBC available in-game for a special version of the Brazilian star. As for James and Thauvin, they too have gotten weak foot boosts, but their cards will only be available in FUT Draft. 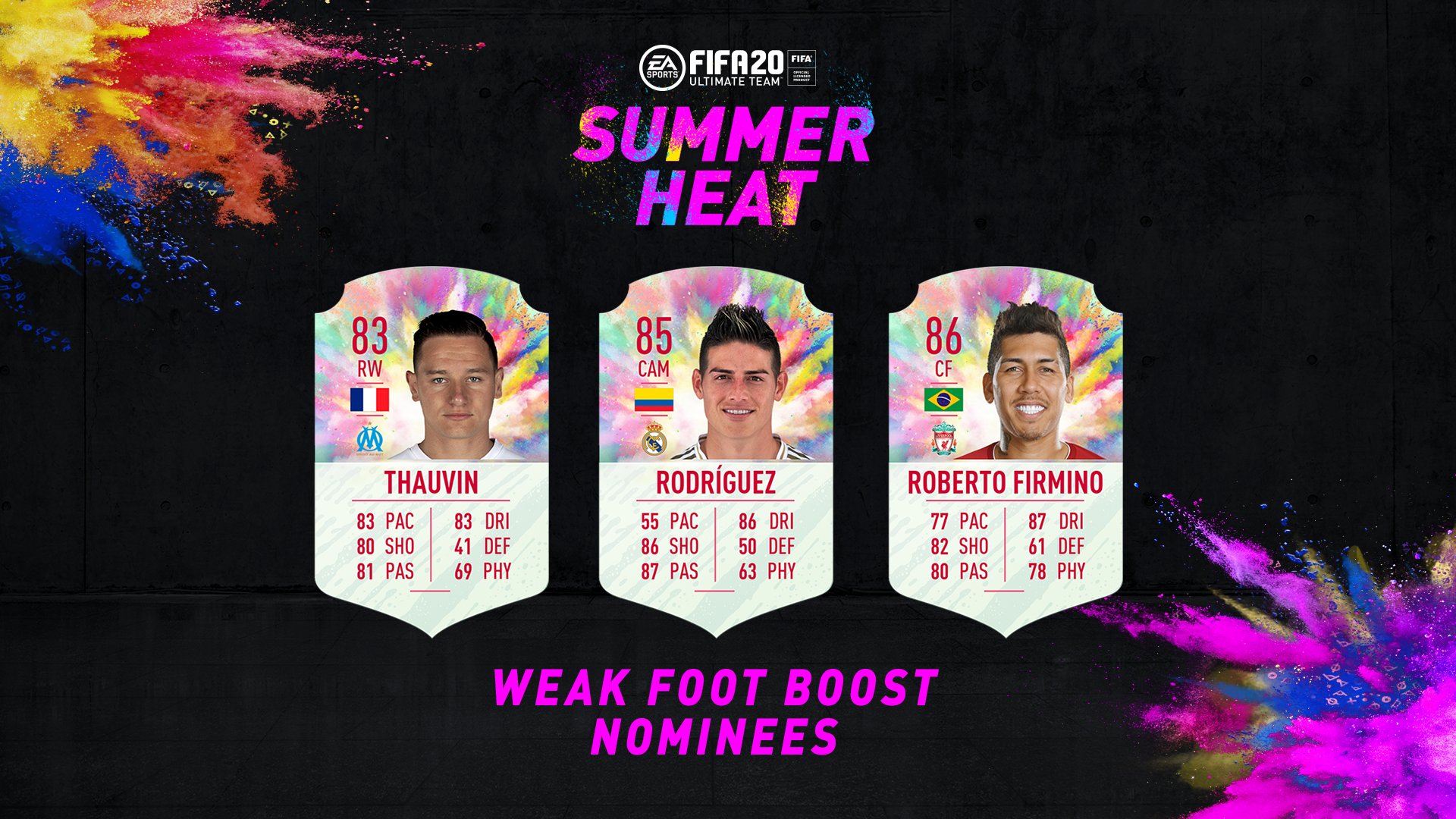 This is already the ninth different version of Roberto Firmino in FUT 20, and the best one by far – beating out his previous highest-rated card (TOTW Moments) by four ratings.

Needless to say, this Summer Heat item is as well-rounded as it gets for a forward; he has enough pace to break the ranks, and the defending and physicality stats are good enough to play him as a roaming midfielder as well, especially considering the High/High work rates.

But perhaps the biggest upgrade is to the weak-foot, which has gone from four stars to five, on top of the already five-star skill moves, making this into a potentially elite-level card.

Considering how good-looking of an item this is, it shouldn’t come as a surprise that there’s a hefty price-tag attached. There are three different squad-building components required, bringing the overall cost to around 412,000 coins on PlayStation 4, 416,000 on Xbox One, and 452,000 on Origin PC, according to FUTBIN.

Here are the current cheapest solutions for all three squad building components without any loyalty or position-change cards. This is a good-looking card, there’s no doubt about it, but dropping 400,000+ coins into an SBC is a huge investment, especially for an untradeable card.

The good news is, however, that you don’t have to fire-sale your club or rush to buy FIFA Packs to raise up your coin total; this SBC has no expiration date, which means you can take your time, slowly build up your coins, and complete it once you’re ready.

As for what lays ahead in this Summer Heat promo, the next vote has already been announced and it features Napoli’s Zielinski, Inter Milan’s Eriksen, and Roma’s Mkhitaryan. Just as with this one, the winner will receive a boosted card via SBC, while the two runner-ups will also be upgraded but only in FUT Draft.

The next #SummerHeat☀️? vote is here! Login to #FUT20 to have your say as to which Serie A Nominee should get a boosted special player item SBC.

The two runners up will be available in FUT Draft in the future. pic.twitter.com/jPyPisBMAY