EA was forced to become creative in the absence of world football. First off the bat, FIFA devs rolled out TOTW Moments, a ‘flashback’ promo that celebrated some of the best Team of the Weeks of FIFAs past. Team of the Season So Far, and the popular new Summer Heat promo have also cropped up in recent weeks too.

Now, the regularly-scheduled Team of the Week teams are back on the menu each and every week again. The first two were absolute crackers. The question is will third time continue the TOTW charm? Here’s everything you need to know.

FIFA 20 Team of the Week revealed

This week’s Team of the Week features some unexpected names, such as Tarkowski and Skorupski, but the likes of Aubameyang, Jamie Vardy and Dybala will be popular picks among FIFA fans looking to bolster their squads. 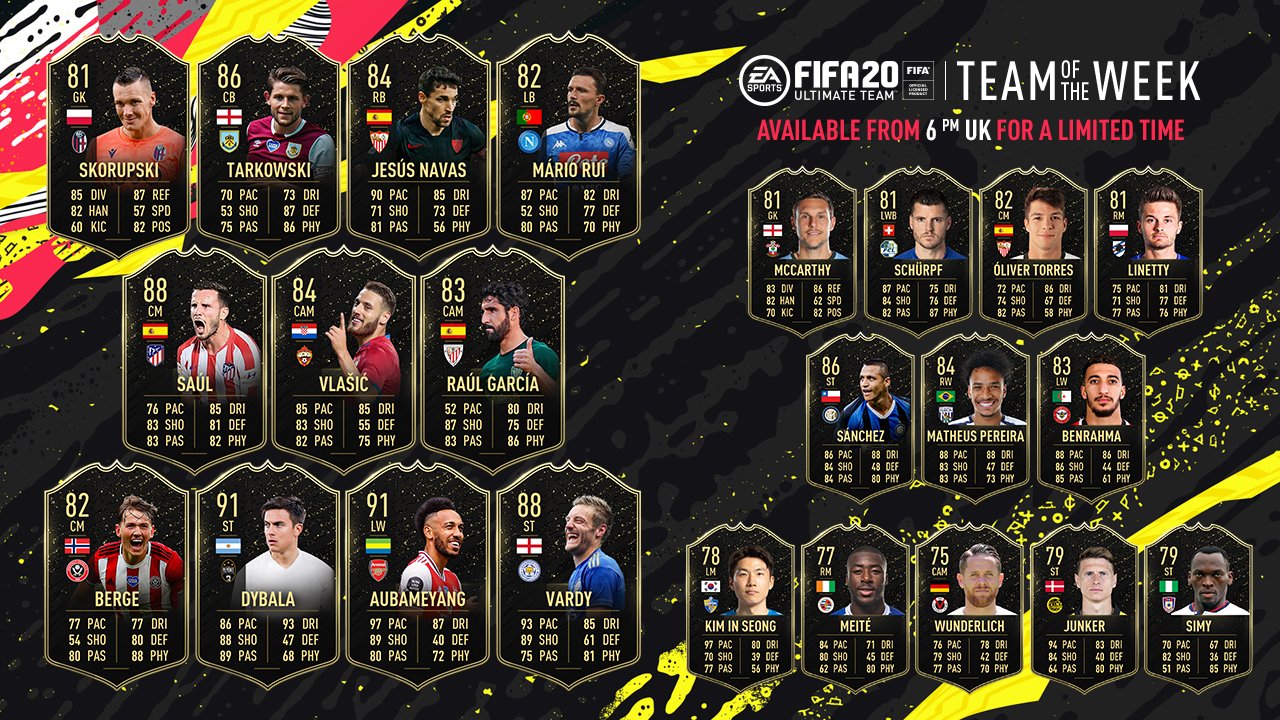 You’ve also got the likes of Sheffield United’s Berge, and Inter Milan’s Alexis Sanchez, who appears in the TOTW for the first time in a while.

Football leagues around the world are back in the swing of the 2019/20 season. For some, like the Bundesliga, their staggered campaign is already finished. There’s still plenty of stars to include in this week’s team, however, which is set to go live on July 8, 2020.

As per usual, the start time for the event will be 6pm BST / 12pm CT / 1pm EST / 3am AEST, with cards confirmed three hours earlier. Keep your eyes peeled on our Twitter account — we always make sure to share the team as soon as it’s live.

Kevin de Bryune shone this week against English champions Liverpool – could it get him into Team of the Week 29?

FIFA 20 Team of the Week 29 predictions

The Bundesliga is over for another year, with Bavarian giants Bayern Munich marching on to their seventh consecutive title, but the rest of the major leagues still have a ways to go until they close the 2019/20 season for good.

This week, Manchester City roared to life against newly-crowned champions Liverpool in a 4–0 shellacking, while Sheffield United rocked Tottenham 3–1 to stay in touch of a European spot as the end of the season looms.

In Italy, Inter Milan ran riot against Brescia in a 6–0 landslide, and Juan Cuadrado played a key role as Juventus defeated Genoa and Torino to climb to a seven-point lead over title rivals Lazio at the top of Serie A.

From the most recent fixtures ⁠— including all the midweek games being played as leagues around the world hustle to finish the 2019/20 season ⁠— let’s take a look at who may be awarded a spot in Team of the Week 28.

So, there you have it ⁠— this week’s full Team of the Week, as well as some of our (fairly accurate) predictions! Cards will enter packs at 6pm BST on Wednesday, July 8 – who are you hoping to get?