A brand new FIFA 20 TOTW 11 FUT squad has officially been revealed by EA SPORTS. This latest selection of Team of the Week cards will enter Ultimate Team packs at 6pm (UK time), November 27, 2019, where these players will be available for exactly one week.

For FUT users who have stored packs specifically for this FIFA Team of the Week, we recommend claiming them as soon as these new items become available. As IF (in-form) cards are generally at their most valuable the moment they are released, we mostly suggest selling them right away.

With the above said, there are certain situations where FUT TOTW in-forms rise in price over a longer period of time. However, this isn’t common, and mostly applies to higher rated players. A lot of this can come down to whether or not the player receives a newer, higher rated special item.

Squad Building Challenges, more commonly know as SBCs, can also determine the value of FUT Team of the Week items. Some of these cards can be price-fixed for specific requirements, and this is exactly why we sometimes see sudden price rises. Check out the full FIFA 20 TOTW 11 squad below. 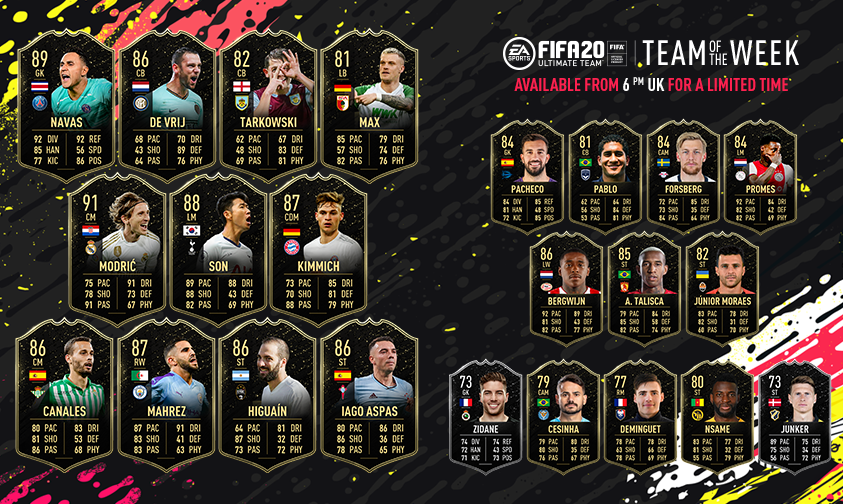 Do you agree with the selections in this latest FUT Team of the Week squad? Are you considering trying out any of these new FIFA 20 TOTW 11 players in your own Ultimate Team? We welcome you to get in touch with us via Twitter, and we look forward to hearing all your thoughts and opinions regarding this latest release.