EA SPORTS have just rewarded loyal FUT users with kits and packs, based on how many times they have logged into FIFA Ultimate Team since the start of FIFA 19. Check out what packs you can get below from how many times you’ve logged in!

First of all, we recommend that users save these packs until 6pm February 6, 2019. This is when the new TOTW 21 squad (Team of the Week) is released, and also when these in-form cards are generally at their highest value. Alternatively, the current TOTW 20 squad isn’t bad, although there aren’t really any superstars to speak of.

These community rewards may have been distributed partly to compensate FUT users for some of the teething issues that the game has experienced since release. Nonetheless, it is a nice gesture as Tier five rewards include an Ultimate Pack, which are valued at 125k coins in the FUT store and also include 30 rare gold players! 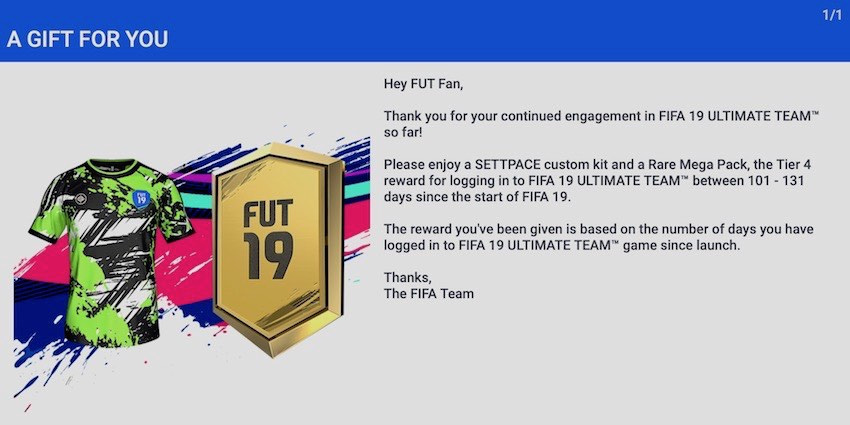 The rewards offered in these packs are untradeable however, although you could still pack some great players to slot into your FIFA 19 Ultimate Teams. Any unwanted untradeable players in your club are best used for SBC solutions, where you can exchange them for a FUT card that you actually want.

This is a good gesture from EA SPORTS as some players may have missed out on FUT packs due to being disconnected in the FIFA 19 FUT Champions Weekend League. Check out which packs you could be due to receive based on your tier from how many times you’ve logged in below…

It appears as though EA have temporarily turned off these Community Rewards, but they will be available again later today.

If you haven't claimed your free pack already, don't worry. The reward has been temporarily turned off but will be back later today. You will have a full week to claim it.

You will also receive a SETTPACE custom kit along with one of the above packs. Would you like to see more of this kind of thing from EA SPORTS? Get in touch with us via Twitter and let us know your thoughts.