The highly anticipated FIFA eClub World Cup is approaching where you can watch it live from February 9, 2019. There will be 16 teams participating for a total prize pool of $100,000, as well as EA SPORTS FIFA 19 Global Series Points on the race to the FIFA eWorld Cup in the summer of 2019.

Brondby IF automatically qualified for the FIFA eClub World Cup as they’re defending champions. The other 15 teams had to qualify through online competition. The prize money and EA SPORTS Global Series points will be distributed to every team which we’ll discuss below.

F2Tekkz of KiNG eSports is top of the FIFA 19 Global Series Xbox One rankings, his team line up in group D. The level of this tournament is as high as it gets and runs across February 9 and 10, taking place in London, England.

Interestingly, the winner of the FUT Champions Cup, Dullen Mike of SK Gaming, won’t be at the FIFA eClub World Cup. Each team will be completing with two players, one on Xbox and one on Playstation (PS). As is usually the case, each group will consist of four teams, which you can see below.

With the winner of this event taking $40,000 prize money, the stakes are high once again. With 1,500 EA SPORTS Global Series points per player of the winning team up for grabs, this will help in qualifying for the FIFA eWorld Cup in the summer of 2019. FIFA eClub World Cup groups confirmed below… 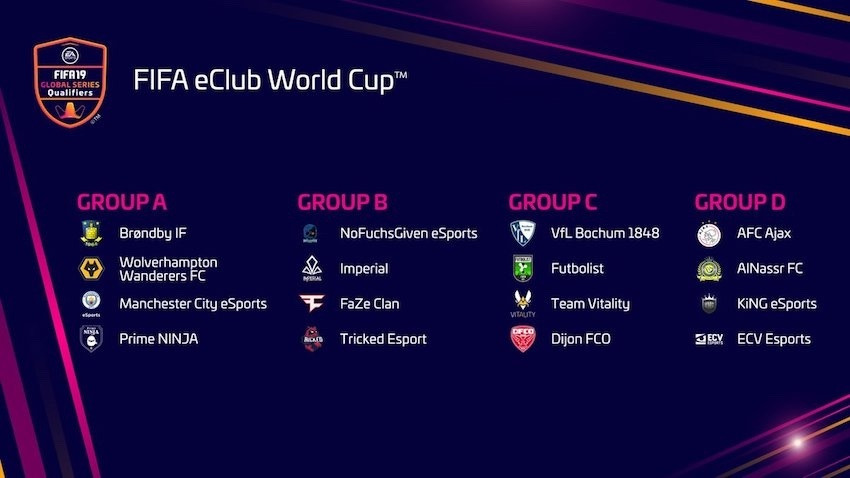 Distribution of the prize money and the Global Series Points

With the FIFA eClub World Cup set to kick off on February 9, 2019, are you going to be tuning in to watch some of the best players in the world? Get in touch with us via Twitter and let us know your thoughts.